Joan of Arc – A Saint and Legendary Figure of France

Who Was Joan of Arc?

Joan of Arc (nick named as ‘The Maid of Orleans’) is a heroic character in France who was canonized as the saint of Roman Catholic Church. Though she was burned alive at a stake by the authorities of her lifetime, Joan of Arc is now a semi-legendary figure, four centuries after her death. She is the positive example of a brave and dynamic woman; women all over the world are modeling her as an example of courageous and energetic woman. She has been the political symbol of France after Napoleon.

Her life and death created history which has no previous example. Information about her last trial which led to her death was available from different chronicles. Five manuscripts of her condemnation trial have been found among the old archives in 19th century. Researchers have fished out most of the records available about the trial of Joan of Arc including the sworn testimony of 115 witnesses. A complete history about the life and death of Joan of Arc was firstly written by Philieppe-Alexandre Le Brun de Charmettes in 1817. As a religious martyr, she is very popular in Catholic community also.

Joan of Arc was a teenager and an uneducated peasant from a small village, but she was an exceptional person with strong religious belief. Her early life was in a remote village and in strict religious atmosphere. She was a firm believer and also believed that she was getting guidance from divine entities. She was a virgin till her death and this virginity was confirmed by Yolande of Aragon, King Charles VII’s mother-in-law and her virginity was declared by Anne of Burgundy, the duchess of Bedford during the pretrial inquiries. This approval of the virginity prevented the court from charging her with witchcraft.

Facts about Joan of Arc

Joan of Arc or Jeamme d’Arc (in her native language) was born around 1412 in the family of a farmer at Domremy in north-east France. Her father was Jacques d’Arc and mother was Isabelle Romee. She was illiterate but has immense faith in the preaching of Catholic Church.

Political situation of France at this time was tensed because the ruling regime of France was in strong dispute with England. This dispute turns into war and it was later known as ‘Hundred Years War’ which was started in 1331. In 1418, Paris was taken by the Burgundians (the English faction led by the Duke of Burgundy) and massacred Count of Armagnac and his followers. Henry V, King of England became the ruler of both England and France after a treaty signed by the queen of France Isabeau of Bavaria (Treaty of Troyes) in 1420. His son Henry VI succeeded him after his death in 1422.

Joan was brought up in strict Christian faith and her strong belief in God made up her mind to hear divine voices which she believed to be conveyed from God. This miraculous change was happened in her at the age of 13. She claimed to have the visions of the Archangel Michael, Saint Margaret and Saint Catherine, instructing her to save the country from the enemies and install its rightful king Charles of Valois. She accepted this divine command and to gather more moral strength to her character, she took the vow of chastity, which she observed till the end of her life. 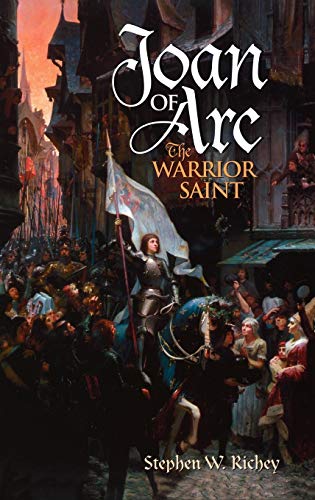 Joan of Arc Wins the Battle for France

In 1428, Joan with some followers made an 11-day journey to Chinon, the site of the palace of crown prince, Charles. For this journey to avoid unforeseen obstacles, she cropped her hair and dressed in men’s clothes. She promised the crown prince that she will lead an army to Orleans (an English occupied area) and win the war to install Charles as the crowned king. At the Royal Court she had made a good impression about herself in Charles. Though most of the king’s advisers agued against this idea, Charles gave her permission to lead the army to Orleans.

Joan set off for Orleans in March 1429 with the army and led several victorious attacks against England forcing them to flight across the Loire River. French army attacked and captured the fortresses ‘Saint Loup’ and ‘Saint-Jena-le-Blanc’. During the fight she was dressed in white armor and used white horse. She was wounded by an arrow between the neck and shoulder in this battle. Joan’s victory gave her more acceptances among the French forces. In July 1429, the prince Charles was crowned as King Charles VII.

Downfall of Joan of Arc

When Joan became more popular because of her character and triumphs, many advisers of the King made their move to discredit her in the mind of the King. In 1430, king has ordered Joan to lead another battle against Burgundians on Compiegne. In this battle, Joan was thrown from her horse during the fight and the Burgundians took her captive on 23rd May 1430.

Joan of Arc Trial and Death

Joan was brought before the English commander at Rouen. The enemies know that she was the sole reason for the crowning of Charles, so they have made plan to destroy Joan. Joan’s trial was politically motivated and the legal proceedings started on 9th January 1431. In the trial, they have made her liable to nearly seventy charges, including witchcraft and dressing like a man. French king Charles did not made any attempt to do negotiations with Burgundians for her release or for her life.

One year after captivity, in May 1931, Joan was forced to sign a confession denying the divine messages that she claimed to have received from God and after this, death sentence was pronounced on her. On May 30, Joan was tied to a pillar at the Vieux-Marche, at the old market place in Rouen and burned alive. Her age was only 19 at the time of the death. The body was burned twice to reduce it to ashes.

25 years after the death of Joan, Pope Callixtus III authorized an inquisitorial court to re-examine the charges against her. The aim of the trial was to find out whether the earlier trail and its verdict had been conducted according to the canon law. A panel of theologians analyzed all the proceedings of the trial including the testimony of 115 witnesses, available in records. This court pronounced Joan as innocent and declared her as a martyr. Joan of Arc became the symbol of Catholic League during the 16th century. Joan of Arc was beatified in 1909 and canonized in 1920. As a saint she became the most popular among all the saints of Catholic Church and became a semi-legendary figure.

Joan of Arc in Stories, Pictures and Films

Her fame and support was increased after four or five centuries after the death and she became the symbol of France. During World War II, her image was used for propaganda by the French government; three vessels of the French Navy had been named after her. Second Sunday of May is a holiday in France in the honor of Joan of Arc.

Joan of Arc became the central theme for many classics, paintings and other cultural works. Many great writers, composers and filmmakers have created works based on her story and some of them are:

The Passion of Joan of Arc (The Criterion Collection)
Buy Now