Kenyans Decided on The Least of These – The 'Bling Bling' and People with Disabilities.

Mr. Sonko is a controversial MP, well-known figure in Nairobi and especially among the youth. Though he is about 38 years old, he considers himself a youth. An outsider would wonder what his people admire in this person. Others would say, he keeps up with the fashion in a culture that does not really embrace men with stud earrings and several chains. He claims to be keeping up with the contemporary world. Mr. Sonko was first elected Member of Parliament for Makadara Constituency in 2007. He has come into collision with the law and other politicians on several occasions. His fashion once landed him in trouble during a parliament proceeding and was kicked out because he did not conform to the parliament dress code protocol. One can also say he is a hands on person. He fights corruptions head-on. I once ask one of his admirers as to what was really respectful with him yet most of time, he is in the news for not upholding the law that he is supposed to be representing in the constituency. She told me that the Sonko identifies with the common mwanaichi (person) in a variety of ways. He listens and is generous with his finances for those in need. So I concluded that, one can pinpoint all faults about Sonko, but at the end of the day, what matters is that he dearly care for his constituents and that they adore him too. They turned a blind eye to all the negatives associations with him and chose him as their senator. He beats his close ODM competitor to clinch victory on a TNA ticket. Sonko as it stands is the senator of our capital city, Nairobi.

The Kenyans were and are excited at the implementation of the new constitution which now recognizes the leadership of people with disabilities. Linet Kemunto Nyakeriga’s a 35 year old, was nominated under The Alliance Party ticket. Ms. Nyakeriga comes from Kiamokama village in Nyaribari Masaba of Kisii County. She is the daughter of Ms Eunice Kwamboka and was born blind. The lord promoted her from being a village knitter in a humble background to Senate where she will rub shoulders, sit, dine, fly and chat with the high and mighty. She likes to stay independent and on the swearing in day, with the help of her sister Ruth Atera, and cheers that filled in the air, Ms. Nyakeriga took to the stage and takes the oath of office. Senator Nyakeriga becomes the second blind woman lawmaker in Kenya’s history since in 1998, when Ms. Josephine Sinyo was nominated by Safina, Party to represent the interests of people with disabilities in the House. She wished all the constituencies would understand that ‘disability is not inability’.

Mr. Kipchumba was also nominated by his party Orange Democratic Movement to represent people with disabilities. He is physically handicapped and he is confined to a wheelchair. He is known as a human rights campaigner. He is always fighting for justice and a new constitutional order as reported by Nation after an interview. He sees his nomination as a miracle.

I must say that Kenyans have really matured politically. They mean business. They looked at the candidates records and did not allow any baseless allegations, the uncorroborated marred issues to interfere in making their informed decisions. I must admit that these elections surprised me as well. I thought I had a good outlook of the outcome, but I was so far from the truth. But whether we are losers or winners, we must accept the results; congratulate the winners and work together to build our country and a better future for the generations to come. For our friends who are non-Kenyans, we ask them to respect our decisions. When others nations choose a qualified man for the top office, we send them messages of congratulations. We expect the same from them for we have made our choice loud and clear and we should not be given conditions, but congratulations for peace and patience during elections. It is now up to the elected officials to deliver and live up to their promises and to the standards that Kenyans are hoping for because they have so much faith in them. May God continue to bless Kenya. 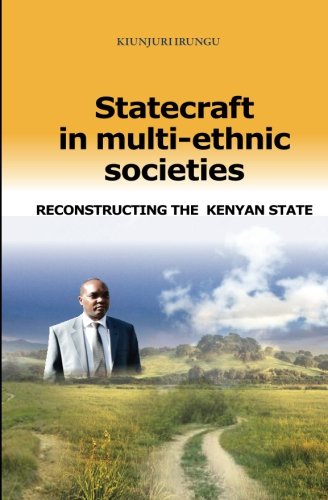 Statecraft in Multi-Ethnic Societies: Pathways to the Construction of a Sustainable Kenyan State
Buy Now