Living Aboard: Why, Yes, ALL Kinds of People Live on Boats!

Do any sane, non-desperate people actually choose to live on a boat?

Yes, because everywhere you go in this world, people are people. In my marina, our liveaboards include a school teacher, a social worker, two web designers, a software engineer, a consultant to the Pentagon, a mother with two teenagers, a graduate school student, a security watchman, a plumber, a retail worker, a fiberglass repairman, and several retirees.

Nope, not at all. The funny thing is, the people who can afford the million-dollar yachts usually also have a pretty luxurious house or two to live in and spend only their vacation or play time on their yachts.

Many liveaboard boats are set up quite comfortably, and many are built a bit nicer than the average house (e.g., floors are covered with holly-inlaid teak and not just covered with construction-grade carpet.) Quite a few, though, maybe most, are far from plush, which makes quite a bit of sense on the water. Some liveaboard boats are quite small and very basic, pretty much a fiberglass, floating campsite. In general, though, what many liveaboards find is that the longer they live on a boat, the more they redefine their housing needs as only housing wants. For many, even the wants change: some do plan on moving into a house again someday, but by far the majority can't imagine wanting to live in a cavernous McMansion ever again.

The kind of boats people choose depends almost entirely on the degree of travel they plan to do. Some (floating houses) are meant not to travel at all; some (ocean-going sailboats, mainly) are meant to circle the globe (and you'd be surprised at how many do!) In between are barges, houseboats, trawlers (like motorhomes that float), power cruisers (shaped sort of like the S.S. Minnow) and various kinds of sailboats. In Europe there are also quite a few canal boats, long and thin, sometimes only about 8 ft. wide! 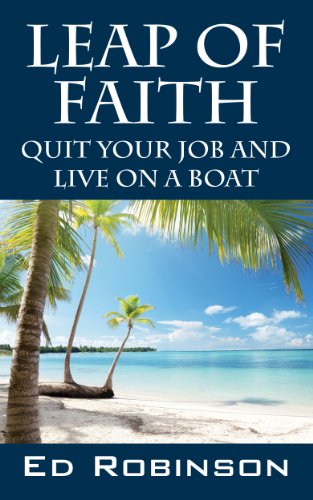 Leap of Faith: Quit Your Job and Live on a Boat
Buy Now

The reasons are many, but here are the most common:

Wondering if maybe moving on board a boat is the right thing for you to do? I suggest, if you possibly can, research before you commit. It is just not for everybody, even some of the people who dream of it for years. There are plenty of sources of info: books, blogs, forums, and boat friends (make 'em if you don't already have 'em.)

Here are a few to get you started:

Let your boat of life be light, packed with only what you need: a homely home and simple pleasures, one or two friends, worth the name, someone to love and someone to love you, a cat, a dog, and a pipe or two, enough to eat and enough to wear, and a little more than enough to drink; for thirst is a dangerous thing.

Has the idea of living on a boat for the fun of it ever crossed your mind at all, even once?