PatriciaJoy has been interested in prepping and frugality for years. She's continued to learn and evolve her prepping style as needed.

Common Sense or Just Too Paranoid?

What do you consider to be the definition of a prepper? The lone wolf, stereotypical survivalist holed up in a shack in the woods? Is it really that simple to define an entire group? The term prepper is derived from the word preparedness, and they're preparing for when SHTF situation (to keep it clean, that means "stuff" hits the fan, except it's stinkier than stuff).

Maybe you've seen the National Geographic television series Doomsday Preppers and thought they were nuts or became interested in becoming one yourself. Admittedly, that show likes to make fun of us, but you can glean some good information if you can get past that. Or maybe you have a prepper in your life and want to have an intervention for them or try to understand them a little better. In any event, here are some common stereotypes and the reality behind them.

This quote has many variations but my favorite is from author Maya Angelou from I Know Why the Caged Bird Sings:

"Hoping for the best, prepared for the worst, unsurprised by anything in between."

#1 Only One Type of Prepper

One of the biggest misconceptions about preppers is that we're clones of each other. The image is that of someone who is white, usually male, far right politically and an evangelical Christian. While a quick glance at YouTube videos by preppers might bring up a majority of the stereotypical view, a deeper look shows we fall along all points of the political and religious spectrum.

We don't all hold the Doomsday mindset. We come in all colors and women are preppers too. Personally, I became interested in prepping during the Bush 2 era when I was a bit more liberal and have gradually become more involved. While I still consider myself relatively new in many respects, I plan on being one no matter who's elected to office.

"One person may think a left-wing government is a danger while another will blame the right-wing. Still others mistrust all government or just understand that Big Brother may not be there when they need him."

The accusation of preppers living in fear is one that I find most contentious. As I live in the Northern USA, I don't "fear" a snow storm that could keep me snowed in for days possibly without power. I simply understand that is a very real possibility among many just as people in other parts of the country and world have their real-life possible scenarios.

While some may use religion as a reason to prep, I've also found there are others who use religion as an excuse not to prep. When I first discussed the issue with my evangelical Christian mother, she told me that she believed that prepping was indicative of someone "not trusting in the Lord."

No matter what belief system you subscribe to, preparing for lack of food and money or a storm isn't going against religious doctrine. I reminded my mother of the story I learned from a sermon in her own church as a child. It was the parable of the man awaiting rescue from a flood and has many versions. It goes something like this:

Local authorities sent out a warning about a great storm coming to town. One man's neighbors asked him to evacuate with them, but he knew that God would send a miracle to save him because of his great faith. Later as the water was rising up to his porch, another neighbor came by in a canoe offering to save him. The man still refused knowing God would intervene. The waters from the storm kept rising until the man had to retreat to the 2nd floor of his home. Police came by on a boat offering to get him safely away, but, "No" he shouted out of his window, "God is on his way."

He had to climb to the roof as the water kept rising. A helicopter flew by with another offer of rescue. The man cried out once more, "God will save me!" As soon as the helicopter left, he was swept away by the flood and drowned. As his soul reached heaven, he asked God, "Father, why didn't send a miracle? I was a faithful servant." God answered, "My son, I sent a warning, a canoe, a boat and a helicopter. What more did you expect?"

Mom just sort of looked at me funny and said "Oh yeah, I remember that," but I could tell she wasn't quite convinced.

We can't prepare for everything. But we can heed common sense warnings. There are atheist, leftist and hippie preppers too. Even those reasons that are common to preppers across sociopolitical and religious lines will have different logic behind them depending on the mindset of each individual. One person may think a left-wing government is a danger while another will blame the right-wing. Still others mistrust all government or just understand that Big Brother may not be there when they need him.

Ironically, about a year or so after sharing that story with my mom, she sent me an email with info on prepping and generators that she heard about on the radio. She thought it sounded like a good idea and wanted to let me know because she knew I was "into that sort of thing." What changed her mind? Did I plant a seed that just took some time to take root? I certainly hope so. While I have my down times like most people, I'm always hopeful and try to stay positive. Fear doesn't guide my path. 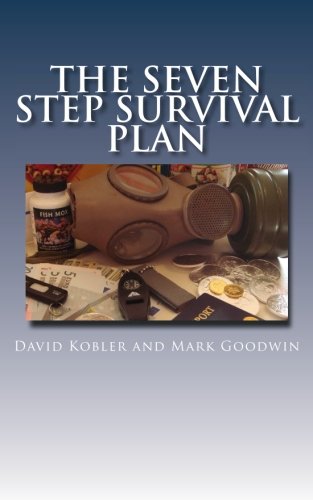 The Seven Step Survival Plan
In this book coauthored by David Kobler, aka SouthernPrepper1, beginning preppers will find help in laying out a survival plan to fit their needs.
Buy Now

Another perception of preppers is that we hate or mistrust humanity or we're just negative people. There could be several reasons for this attitude. One is the image of the lone wolf I shared above. Supposedly, we think everyone should pull themselves up by the bootstraps and no one deserves a handout. While it's true that there is a common theme of self-reliance among us, we're not heartless people.

Preppers that I know do see an encroaching attitude of entitlement but we don't believe truly needy people shouldn't receive help. We believe in a hand up instead of a handout when absolutely necessary.

It isn't negative to be realistic while actively working on bettering your situation or preparing for bad situations. Many people build savings accounts to act as a cushion against unexpected events. Would you call those people negative or proactively working on self-sufficiency?

Some preppers may be cop or military wannabes, but some are ex-military and have seen the results of civil unrest and government corruption in other parts of the world. SouthernPrepper1 and MainePrepper come to mind as ex-military men who've been YouTube staples as far as intelligent, insightful prepping advice goes, though sadly MainePrepper's channel is gone due to his health issues. SouthernPrepper1, AKA David Kobler, has even served as one of the Doomsday Preppers experts you see referred to in each episode.

I'm a marine's daughter, and while current and former members of the military are as flawed as the rest of us, they may have had tactical training that would be invaluable in an emergency situation. I see no reason not to consider what some of them have to say regarding preparedness.

A Little Humor Before SHTF

What level of prepping are you at? Choose the one you're closest to.

I'm not going to lie about this one. Compared to the average person, we would be considered gun nuts. Do most of us have an arsenal that could outfit a small army? Some preppers probably do. However, the most common advice I've come across is to have what you need in your given situation. There are even those among us who just aren't gun people or can't be due to the restrictive laws where they live.

I grew up around shotguns when I was young and the 2nd amendment was always taken for granted. If someone spends all their cash and time on guns, then I think they might need to get out and enjoy life more. Otherwise, I don't consider the average gun owner a gun "nut."

Begin Where You Are

Some of us will fit stereotypes—

I'm not an anti-vaxxer, anti-GMO, a 9/11 truther or a doomsdayer and I don't bother people about religion or their personal lives. I think extremism from both sides of the political aisle is causing pointless rifts in our society. Nowadays, becoming healthier physically is just as important to me as ammo and food storage.

I just want more preppers. For the most part, I'm preaching to the choir. Some people will think we're crazy no matter what. The thing is, there are preppers who used to think the very same thing.

If you're ready to begin but feel a little overwhelmed, my advice is to start small with the recommended three-day supply of water and food for everyone in your family including pets to cover a short-term emergency. Keep a first aid kit at home and in your car and learn how to use it. Think about building a bug-out-bag (BOB for short) and start exercising and eating better if you've let your health go. Begin where you are, keep prepping and in no time you'll be further than you can imagine right now. Good luck!

A Clip From Doomsday Preppers - Episode 2