My Esoteric got interested in Art when attending an art seminar and auction on a Carnival Cruise ship. The rest is history.

TDS is a made-up insult used by Trump supporters against those who find Trump a dangerous problem. If you complain about Trump, you have TDS. If you present facts that contradict Trump, you have TDS. You get the picture. Well, PTSD (Trump-type) is real; this, or similar terms, are used by some mental health professionals to describe peoples reaction to the election of Donald Trump.

Is a term found in an essay by Betty P. Teng, M.F.A., L.M.S.W. titled Trauma, Time, Truth, and Trump for Dr. Bandy X. Lee's book, The Dangerous Case of Donald Trump. Her essay explores the REAL impact on normal Americans from Donald Trump 1) having won the election and 2) what he has done since.

To those in America who have been the victims of "xenophobia, racism, sexism, and Islamophobia" (all the hallmarks of Trump's campaign) prior to the election of Trump were, as Ms. Teng puts it "re-traumatized; "I feel like I did after 9/11," said by one of her colleagues, and a patient reported "I am in shock!" In the weeks and months following Trump's election, Teng reports that there was a massive increase in patients seeking help in dealing with Donald Trump being president and in control of their lives.

The complaints are specific. She recites patients reactions:

Teng points out that this situation is far worse to these people than 9/11 because 9/11 was a "finite event and enacted by an outside source". Trump, on the other hand, is ongoing, elected by fellow Americans, and happening daily, if not hourly. But should what they feel be termed "traumatic"?

"Trauma" as defined by the American Psychological Association is "an emotional response to a terrible event like an accident, rape, or natural disaster." Does Trump's election, however, qualify as an actual trauma? Ms. Teng argues forcefully that it does.

This author is not one of the targeted groups, yet I did feel something when Trump won that night, something I have never felt from the previous nine presidents I have witnessed being elected. I am not prone to emotion (so they tell me although I do cry at movies), I am male, I am white, I am a veteran who did not suffer from my tour in Vietnam (although the rejection by my fellow Americans afterward was very hurtful), I served my country in one capacity or another for 37 years, and I am a successful businessman (and yes, I am an old fart). And I felt a disconcerting sense of foreboding the night of November 8, 2016 as the election results came in. In the almost three years since, that feeling of foreboding has turned into real fear for the well-being of this nation (and because of Trump's denial of climate change, the earth). With a year to go I have some niggling doubts our democracy, as we know it, will survive.

There is no doubt in my mind that America has been permanently damaged by Trump. If I feel this way without being traumatized by his election, I cannot imagine how the millions of people who have good reason to be traumatized must feel.

Symptoms from those who are suffering, really suffering, from Trump's election include all of the classic ones from trauma-related PTSD: insomnia, lack of focus, hypervigilance, irritability, and volatility. What Teng finds interesting is she, and others, are seeing this set of symptoms from people who have not suffered war, rape, violent crime, abuse, and such - all physical things - but from the results of a relatively non-violent election. This isn't a few liberals overreacting but thousands upon thousands of real people telling professional therapists their personal fears resulting from Trump having become the most powerful person in the world. 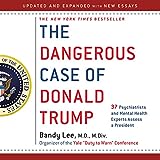 The Dangerous Case of Donald Trump: 37 Psychiatrists and Mental Health Experts Assess a President - Updated and Expanded with New Essays
This has 10 additional essays than the book I bought.
Buy Now

"It is inevitable that such destabilizing behavior (Trump's) in one who holds the most powerful leadership position in the world will heighten anxiety and fear in not only previously traumatized, but the untraumatized as well." (emphasis is the mine)

She notes that various terms have been made up to describe this phenomenon: post-election stress disorder, post-Trump stress disorder, and headline stress disorder.1 All are designed to get across the idea that, rather than a physical cause for trauma and PTSD-type symptoms, it is the aggressive words, the dehumanizing policies (ripping kids out of mother's arms), and the violent rhetoric that spews daily from the mouth and pen of Donald Trump. Adding to this anxiety is the inability to trust anything that Trump say - he has "shaken our notion of truth and fact". Compounding things even further is the not knowing; the not knowing if "locked-and-loaded" Trump is going to drag, most likely by accident, into a another war with the Middle East or not knowing his threat "I have a bigger (nuclear) button) was going to lead to nuclear war with North Korea.

Another destabilizing activity of Trump is his non-stop demonizing of America's free press. Once the source of dependable facts in most people's mind but now, because of his rhetoric (and not because of the media itself) that notion has been thrown into doubt - what are people supposed to believe? It should be easy to see how all of this, combined, will drive so many people to seek help. Help to relieve their doubts about the world; help to simply be able to talk to somebody about the intangible fears Trump brings on; help to simply vent.

1 Then, of course, you have the derisive term from the Right, Trump Derangement Syndrome (TDS), used to insult those who Trump is hurting.

Why is Trump so Scary?

A parable was brought up several times during the election when discussing Donald Trump's qualifications to hold office used a brain surgeon as an example. Ms. Teng uses a cardiac surgeon as her example.

She makes the reasonable assumption that it is critical that the President of the United States has a good understanding (or even an interest in) of how the government works, national security, and foreign and domestic policy. It is critical that the president is of sound mind and judgement, cool during times of great stress, and able to separate his own needs from that of the countries - lives, many lives depend on it. Likewise, the cardiac surgeon needs his own set of skills relevant to the operation was well as the same personal traits.

Imagine the patients' freight going into an operating room knowing their doctor has no experience and doesn't particularly care about the outcome so long as the doctor personally benefits. That is no different from an American citizen, especially one who falls into the categories Trump finds objectionable, faced with an unpredictable, unstable, demeaning leader. If is flat scary - it scares the hell out of me!

Also consider how traumatized so many Americans already were before Trump was elected. Teng cites statistics like:

It seems to me a lot of Americans are predisposed to be re-traumatized, which I suspect is easier than being traumatized the first time.

"When we consider how many Americans experience, personally or intergenerationally, the traumas of slavery, immigration, war, natural disaster, and genocide, we start to understand on another level how it is that Donald Trump, a wholly unqualified president who neglects history, highlights divisions, and makes impulsive decisions, would foment unrest in all of us.

Thus, President Trump is a destabilizing force that stirs some of us to the point where we experience him as psycho-socio-political tornado."

Did Trump Do It

A traumatic experience can become "Crisis" if the traumatized person becomes isolated with little or no way to relieve their stress and anxiety. The reason traumatized patients can recover to some degree is they can express their feelings to others who (not necessarily a therapist, I think) understand what the patient is experiencing; the pressure valve can somewhat or completely be relieved.

When that outlet is not available, regardless of why, a traumatic experience becomes a "crisis". And like a pressure-cooker over a fire, the stress and anxiety keep mounting, possibly leading to more problems. Speaking of the victims in crisis:

"Their internal chaos remains the same because there are no words to make sense of it. Without language (being able to express oneself to others), there is only mindless action and reaction, a cycle driven by fear, panic, and dissociation."

And, as I understand her point, this is why so many people are seeking help in the age of Trump. He keeps so many of us in a state of crisis because he continuously keeps "flooding the media outlets ... with myriad vindictive tweets, defensive press conferences, and sudden firings." Context, she says, is everything. How many people really cared how deranged Trump may have acted in The Apprentice - not much, I suspect. But he isn't a made-for-TV bad guy - he is the President; arguably the most powerful man on earth. Of course we take notice; we take what he says and does to heart; we internalize it; we don't have a choice. And for some of us, his instability destabilizes us as well.

The Internet is a Megaphone and Amplifier

Ms. Teng points to several studies that delve into the Internet's role in all of this assault on the nation's mental health. The issue, says Teng, is:

"Our ever-increasing use of the Internet demands that we process new information at the speed of the supercomputers that drive it."

Let me repeat the key phrase "at the speed of the supercomputers that drive it." What does that mean? It means people no longer have the time to digest, to think, to analyze, and then make conclusions from what they just heard or say - before the next blast is received. This cycle leads to "exhaustion" if too much time is spent on the Internet. From this, we get to the next great observation from Teng:

"Because this onslaught of information disallows us from taking the time to truly consider any of it, we open ourselves to believing dangerous and unchecked falsehoods1.

Trump is a master at harnessing this dynamic to his benefit and the decline of our mental health. Combined this becomes, as Teng observers:

"... we find ourselves in a perfect storm where we have, as our U.S. president, a narcissist fixed on broadcasting his own unilateral and inconsistent versions of reality in a climate driven by Internet media channels that produce information so quickly that they privilege (give more weight to) falsehoods over truth."

In working with the traumatized, Teng says, it is so important that "a patient stabilize herself by affirming the truth of what..." she experienced. How is this possible in a world where "truth" is always in doubt; is always challenged by the most powerful man in the world who is also the leader of your country. How can you get well in this unstable environment? For sure, therapists have their work cut out for them in the age of the Internet and Trump where -

".. it is traumatizing to have, in the White House, a president and an administration intent on confounding 'full communication' by manipulating the truth to server their own ends."

1 At the time of this writing, Donald Trump has passed the 14,000 mark for the number of verifiable, false statements and outright lies which he has uttered.