Graduated NYU 1963. Worked in NYC in public relations 2 years then as reporter/news editor 32 years at The Hour newspapers. Retired in 2000.

Heads I Win, Tails You Lose!

A Penny for Your Thoughts! 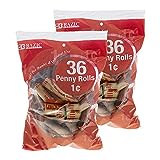 The hue and cry we hear of late from government officials and banks over the severe shortage of pennies may be vexing to those who have to cope with the effect of the problem, but, personally, I find the situation laughable.

The U.S. Mint and the Federal Reserve Board continue to rail about "low inventories" and "spot shortages," ostensibly caused by people stashing their pennies away in coffee cans and desk drawers.

These federal officials, apparently, are dim-witted as well as myopic.

Anyone who thinks about the problem for more than 10 seconds knows why nearly everyone has a huge jar of pennies on his (or her) living-room mantel, or in that humongous piggy bank in the children's room: If you had a handful of pennies, you could barely buy the 33-cent stamp you might need to mail a letter to your congressman telling him how you feel about those little copper, or is it zinc, cents.

I'm old enough to remember when you could really buy something with a penny -- and a handful of pennies was actually worth something. Once upon a time, a penny could buy any one of a large variety of candies or be used to find out how much you weighed on one of those commercial scales.

Tucked away somewhere in my penny-rich Darien estate, I have more than a dozen rolls of pennies. What's more, they are not the currently minted Lincoln Memorials; every one is a wheat ear penny, which the government began minting in 1909.

In fact, I have so many pennies at home that I feel a kinship with computer whiz Bill Gates. You've heard the story: Billionaire Gates makes so much money every minute that he'd be wasting his time just bending down to pick up a dropped hundred-dollar bill.

I feel the same way about pennies. I see pennies on the ground almost daily, dropped or tossed away by people who couldn't care less about them. I'm sure you see them, too. Pick them up? Why?

Typically, the government can't see the forest for the trees. It has a problem, sure, but if it's looking for a solution it's going about it the wrong way.

Will Nickels Be Next?

Officials should recognize that pennies are all but worthless -- that's why there are shortages. That's why people hoard them. In fact, the way things are going, nickels will be next. They're barely worth five pennies.

The Philadelphia and Denver mints are continuing to manufacture pennies six days a week on a 214-hour basis. Over the last 30 years, 312 billion pennies have been minted, and more than 114 billion are actively circulated in the United States.

Instead of minting more pennies by the billions -- and billions -- officials should be looking for a way to discontinue their use entirely.

But, obviously, this is far too complicated an idea for our political and financial leaders. After all, these are the same people who think they can save big bucks by minting dollar coins by the billions despite convincing proof, from history, that such coins are not any more enticing to Americans than pennies.

Should the U.S.Government end all circulation of the penny?