Random Acts for the Bern

Virginia is a passionate progressive and now leads a group of women activists in her retirement community. It's not safe to ignore politics.

Kindness and Bernie Sanders Go Together

You hear people talk about random acts of kindness. Here I'll share with you ways that people are using kindness and other random ways to spread the word about Bernie Sanders.

Remember if you are wearing your Bernie shirt or button or driving a car with a Bernie bumper sticker, you represent Senator Bernie Sanders. Be on your best behavior and don't give anyone the chance to say that Bernie's supporters are mean or badly behaved.

Bernie Sanders' character is one of integrity, honor, and caring which are the bedrock for all the social changes he proposes. As supporters of this candidate, we want to get the word out to others and represent him well.

Spreading THE BERN One Person at a Time

Llud Krushnowski spread some good Bernie feeling today, "So, I was in the drive-thru getting coffee at Dunkin Donuts this morning. I pulled up to the window, and the cashier said, "the lady in front of you paid for your coffee".

Bewildered, I looked ahead and saw she had a Bernie bumper sticker. I then turned to the cashier and asked what the person behind me was getting. She told me and I paid for it. I have a Bernie sticker on my car as well.

The lady behind me caught up with me after I left giving me thumbs up and waving. I can only hope she paid it forward. It's great to see the ripples a nice act can cause. As Bernie supporters, we should make more ripples and create a wave!

Get Bernie's Name Out There

Jimi J. tells about an interaction at the local bank, "So I was at the Bank today and they were taking donations. So I decided to donate and I got to write my name on a heart that goes in the bank window. I tell the teller to write Bernie. She says hell yeah, I'm voting for Bernie, hell yeah I'm voting for Bernie too." ‪#‎feeltheBern‬

Are You Spreading Good Feelings about Bernie Sanders?

This Is How Happy I Am When I Promote Bernie 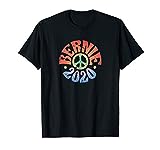 Bernie 2020 Peace Vintage T-Shirt
You'll want to have 2 or 3 Bernie shirts in your closet, so anytime you're going out in public, you'll have one to wear. I make sure I have my Bernie Sanders shirt on when I go to the grocery store, to play cards with the neighbor ladies, or picking up a prescription at the drugstore. While you are out, keep your eyes open for a chance to commit a random act of kindness in Bernie's name. Let everyone see the kind of followers he attracts. This black shirt has a striking graphic using the words BERNIE 2020 wrapped around a peace sign. It comes in various colors and with different necklines. I also have other designs and some long-sleeved shirts so I have a variety of outfits for promoting my favorite candidate. I still have my Bernie 2016 shirts, but I got this one to update my Bernie look.
Buy Now

Another Random Act of Kindness Done in the Name of Bernie

Angela G. shared, in the Bernie Sanders Social Network on Facebook, this story:

"Today, I ate at my favorite breakfast place and my favorite waitress, a Bernie supporter, who is raising her son and herself on a waitress's salary. I saw a table of four left her just a two dollar tip. My bill came and it was just under $10, I gave her a $20 and told her this was to make up for any more cheapskates who might leave her a crappy tip. She was thrilled and I said, 'Hey, us Bernie girls gotta stick together.''

This basket sits in my passenger seat. When I pull up, I roll down the window with my brightest smile and say, "Hi! I'm doing Random Acts of Kindness today on behalf of Bernie Sanders because I'm a super fan. Want a cookie?" Ninety percent or more have said yes. "Have you voted?" If they say "yes I just voted for Bernie," I enthusiastically thank them and say, "Great! Take another cookie for a stranger and a Random Act Of Bernie card and pass It on! We need to get out the vote today big time!" If they have not yet voted, I ask if they plan to, make sure they know their polling place and ask when they plan to vote, explaining when polls close.

If they are an undecided voter, I ask if I can answer any questions about Bernie and explain why I am voting for him. If they are a Republican or if they support someone else, I tell them I don't hold it against them and they can have a cookie anyway. As I leave I thank them for participating in Democracy.

In 1 1/2 hour, 4 Bernie voters pledged to pass It on, two undecided voters who didn't think they had time to vote pledged to vote for Bernie after work (I made sure they knew where to go) and two people who were undecided but planning to vote listened carefully to why I support Bernie, asked questions and accepted literature.

Literature goes to the undecided people. Random Acts of Bernie cards go to supporters who will pass It on and anybody I feel needs a smile (one homeless guy who won't vote). Thank you, everyone for helping Michigan Get Out The Vote!!! ‪#‎RandomActsOfBernie‬

Can't Wait to Spell out Bernie's Name in a Store Display

are great examples of random acts of Bern. Also check out the idea below.

So, I was setting up my Wifi router at home today and thought "Hey, I and everyone else should re-name our WiFi "BernieSanders2020." Am I right?

Regina R. - "I live in Georgia, needless to say, a Red State. I'm campaigning hard for Bernie. I mapped out a 50-mile radius and am going to all the fast food establishments. I order one thing off the drive-thru menu (fruit parfait at McDonald's, for example). When I get to the window I commiserate about the low wages those places pay, tell them about Bernie's plan to raise the minimum wage to $15/hr. and hand them some printouts with further info.

One lady asked me to pull aside and she would "bring my order out". She wanted to ask me a few questions and was very excited to hear about Bernie. Most of these places have two windows so it gives me an opportunity to double the exposure to Bernie. I keep a cooler in my car for all the parfaits and shakes I order.

I then donate them to a battered women's or homeless shelter, which also gives me an opportunity to talk to more people who would benefit from Bernie's program. So far it's working great.

Chins up, we can do this!" Let's get Bernie's name and platform out there.