Our Strange System of Electing Presidents

It is ironic that the United States, a country that claims to be a great promoter and example of democracy, does not choose its most powerful official in a democratic election. Instead of individual Americans casting their votes for president in a general, national election, votes are cast by each of the fifty states. This strange system concocted by our Founding Fathers was one of many aspects of the Constitution that demonstrated their ambivalence toward democracy.

In the Electoral College system, each state is given a number of electoral votes equal to the combined representatives that it has in the House and the Senate. The state then has the right to determine the process by which those electoral votes will be decided. In early American history, some states allowed the voters to decide through a statewide election, but in others, state legislators chose the electors. By the mid-19th century, all states had adopted a system in which voters would decide. On rare occasions, there have been states that cast their votes proportionally, dividing them up among candidates based on the percentage of votes that each received. (Only Nebraska does that today.) The norm, however, has been a winner-take-all system, with the top vote-getting candidate receiving all of the state’s electoral votes. To win the Presidency, a candidate needs to win more than 50% of the total electoral votes possible. If no one receives a majority, then the House of Representatives selects the President.

Why the System Should Change

Different explanations have been offered to explain why the Founding Fathers chose this system. Like many things in the Constitution, it was an attempt to strike a balance between different alternatives that were available. You can find a brief summary of the basic explanations in the link to the right. Now while I can understand some of the reasoning of the Constitution framers, I still believe that we are long overdue for a change. The current system disenfranchises Americans, gives certain Americans more influence on Presidential elections than others, and even creates a greater opportunity for fraud. In sum, it is both unfair and undemocratic, terms that most of us consider synonymous when it comes to elections. So here is a list of the biggest “issues” that I have with the current system.

This is simply a question of math. In the 2010 census, it was determined that California has 37,253,956 people, and Wyoming has 563,626. Since California will have 55 electoral votes in the 2012 election, we in the Golden State get one electoral vote per 677,345 people. In Wyoming, they will get one electoral vote per 187,875 people. So your vote carries almost four times as much weight in Wyoming as in California. The math comes out this way because every state has two senators regardless of population, and since each state is guaranteed at least one person in the House, three electoral votes are the minimum. So if you want your vote to count in presidential elections as much as possible, then move to Wyoming. The only catch is that you have to live in Wyoming.

If you live in Wyoming, Alaska, or Hawaii, this system is a pretty good deal. Small population states might also argue that a change in the system will cause them to be overwhelmed by the big states. With all due respect, I find this argument to be a load of B.S. I do not vote for president as a Californian; I vote as an American. And in a national election for a national office, each American’s vote should count equally. Also, the small states, because every state gets two senators, have a disproportionate number of representatives in Congress. It is in Congress, after all, that representatives are supposed to be protecting the interests of their particular states. And based on where much of the federal spending through earmarks and other government aid goes, it is clear that representatives of small states are doing a pretty good job. Ted Stevens of Alaska and Robert Byrd of West Virginia were legends when it came to funneling federal dollars to their states.

In every presidential election, the two main candidates spend almost all of their time campaigning in roughly 10-15 states. There is no point in campaigning very often in the other 35-40 because everyone knows which candidate is going to win in those states. In a state like Utah, the Republican is going to win, and in New York, the Democrat is a lock. It’s simply a matter of political demographics. But in certain states, often called swing states, there is a roughly equal distribution between members of the two major parties. So candidates spend a lot of time in states that could go either way, and they will tend to talk about the issues that the members of those states care about the most. The only reason for a Presidential candidate to come to my home state of California is to do some fundraising.

This problem is not the fault of the Constitution framers. They did not want a political party system to form. It did not take long, however, for two major factions to evolve, and over time, they have developed the modern system of political primaries and caucuses to determine their nominees. Different states have their primaries on different days, and Iowa and New Hampshire, for whatever reason, have the apparent God-given right to host their caucus / primary first and second. And while neither state is particularly important in terms of the number of delegates it grants, their little elections are significant because it is crucial for a prospective nominee to get off to a good start. This is why anyone who is even considering a run at the presidency will send some people off to Iowa early. If a candidate performs well in early primaries, potential financial donors to the campaign will realize that he or she might win, and they will be more likely to give. No person or organization, after all, wants to waste money on a future loser. There will be no return on the “investment.”  So if a candidate does not start off with a good head of steam, then the money will dry up early. Often, the nominees are a foregone conclusion long before many states get to have their primaries, and these late, irrelevant primaries are often hosted by states with large populations.

Margin of Victory is Irrelevant

In a winner-take-all system, it does not matter if a candidate wins a state by a narrow margin or in a landslide. Also, in a system where the state winner gets all of the electoral votes, a large number of voters in every election are essentially disenfranchised. If you voted for John McCain in California in 2008, your vote did not count, and if you voted for Barack Obama in Texas, you were in the same boat. Some would argue that proportional representation could improve this situation, but it would still be flawed. To make the numbers come out evenly, you would have to do some serious “rounding off.” And when you are dealing with large numbers of voters, dividing votes up proportionally would still not come out quite right. Also, proportional representation is only an improvement if every state does it. If there are more Democrat-leaning states that have winner-take-all systems than Republican-leaning states, then the Democrats will have an advantage (and vice versa).

The Person With the Most Votes Sometimes Loses

Most of the time, the person who gets the most total votes also gets the most electoral votes. Occasionally, however – 1824, 1876, 1888, and 2000 – the person who has won the popular vote did not become president. And in 2000, in an election that involved a little more than 105 million voters, the entire result hinged on a too close to call election in Florida. In a truly democratic election based on popular vote, the chance of a result this close is very small. But in a winner-take-all, state-by-state system, too close to call can become a reality. And when it can all come down to a local election, the chances of fraud are increased. It is difficult to manipulate the results of a nationwide election, but when it is a matter of pushing the vote just enough in your favor to eke out a winner-take-all victory, “shenanigans” can be more likely. Al Gore, who won the popular vote by more than a half million voters, probably still wakes up late in the night, in a cold sweat, crying out to the heavens about his cruel fate. And whether you are a Republican, Democrat, or Independent, this system should tick you off as well. Is this what we call democracy?

A Proposal for a Better System, and Why It Won't Happen

So how can we change the system to make it truly democratic? Political parties are private organizations, so they can choose their candidates however they wish. In my view, having a single national primary election would be an improvement, but they cannot be legally forced to change. But once the parties pick their candidates, we should have a national election in which the winner is determined by popular vote. If a candidate achieves a majority (over 50%), that candidate is declared the winner. If there is no winner, then you have a runoff between the top two vote getters. This way, people can pick the candidate that they like the most during the first round, and then go for the better of the two remaining in the runoff. This would give candidates of smaller parties more of a chance to make a difference, and it would actually be democratic.

Unfortunately, the Electoral College system is unlikely to ever change. The Constitution is practically viewed as a political Bible, and the Founding Fathers our political saints. Changing a system that is so entrenched in our political tradition and that was created by these hallowed figures will be very difficult. Also, states with smaller populations have no incentive to change. And since it takes three-fourths of the states to go along with any amendment, and 19 states have six or fewer electoral votes, good luck getting such a major change ratified. So we are apparently stuck with this system, and those of us who like democracy can take comfort in the fact that the candidate with the most total votes usually wins. Plus, if the system never changes, Al Gore will not have to cry out in anger about the fact that he came along a little too soon. Of course, he can also take comfort in the fact that his “loss” gave him the chance to be an environmentalist movie star. 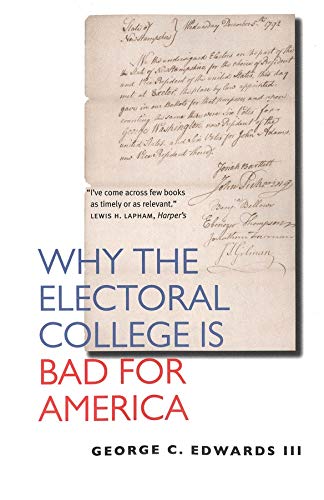 Why the Electoral College Is Bad for America
Buy Now