Can A Robot McDonald's In Phoenix Handle A $15.00 Minimum Wage?

Could It Happen? - Possibly.

A parody news site launched a story about McRobots at McDonald's in 2015. Yahoo News picked up the story - and then swiftly dropped it. While not true, the story has some basis in fact and this Hub looks at the possibilities.

I remember when a housemate of mine badgered the company that owned our rented house for so many expensive improvements that the company leveled the house and made the property into a parking lot.

Her move required a semi-truck, another U-Haul truck, a small trailer, and two SUVs.

Today, McDonald's has found that many of the tactics that helped them absorb the last Federal Minimum Wage Increase are not working today to satisfy the growing demand for a $15.00 minimum wage. In that light, the company allegedly plans to eliminate part of its human crew members. Those few remaining will be more in the nature of robotics technicians.

Ask and ye shall receive - but not always what you want.

McDonald’s works more like a giant vending machine. You wait in line until you get to the machine interface, you put in your order and your money, and the food comes out the slot. This works for McDonald’s because they have narrowed customer expectations to match a factory-like service. -- [Reference: https://www.flickr.com/photos/davegray/6463738177/ on December 5, 2011]

Fast Food Worker of the Future?

Reports are that if the first robot McDonald's works out well, then the company will build or convert 25,000 more restaurants to robot crews. This causes thousands of people to lose work altogether. They will decline in income from $15.00 per hour minimum wage to no wages at all. The cost of the robots is high, but would be capitalized. Special new bank loans for robot workers might by in development.

Years ago, I asked a store owner that had just installed computerized cash registers in his McDonald's restaurant how many transactions each station could handle per minute or hour. He could not tell me. Where is an efficiency expert when you need one?

McRobots (real name) have allegedly proven in tests that they are "50% faster" than human crew people, follow instructions, clean up thoroughly, and avoid arguments with customers. They also cannot be tricked into giving too much change after payment. 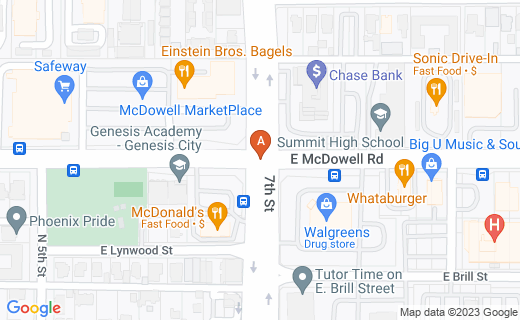 The McDonald's at 545 E. McDowell in Phoenix has an attractive Facebook page with news and fantastic cartoons, and not a single sign of a robot yet. Look for the cartoon of a smiling scorpion sharing MsDonald's fries with a happy rattlesnake. Reference: https://www.facebook.com/pages/McDonalds-at-545-E-Mcdowell/105988832775653

The Electric Grandmother Is In Here 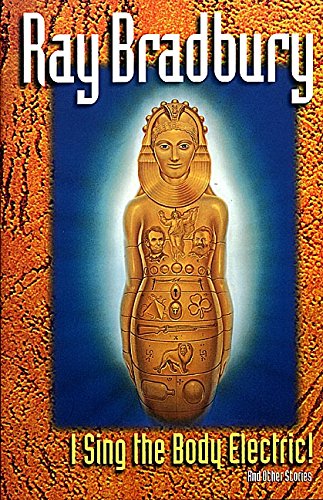 I Sing the Body Electric! And Other Stories
Buy Now

The first McRobots may be welcomes or they may drive some people away, Persons afraid of answering machines in the past may be leery of trying to order and receive food via robot these days. I believe that franchise owners would like the robot experience to be similar to that of the happy kids who grow up with the Robot Grandmother of Twilight Zone fame and the book I Sing the Body Electric.

Take a look at the map above and see the competition. If Phoenix downtown workers, residents, and visitors do not like the robots initially, they may take advantage of human interaction at the competition surrounding the Golden Arches at 7th and McDowell. They can choose from a Sonic Drive-In, Whataburger, Starbucks, and even a Safeway grocery store that probably has - or may institute - sandwiches and a cafe. A Taco bell sits just a couple of blocks west of the robot restaurant and businesses containing cafeterias lie to the east.

If the McRobots can be developed quickly and prove as fast and accurate in everyday transactions as they are in scientists' minds and computer simulations, then the consumer public may accept them and McDonald's business revenues could see a comeback.

Restaurant service by the Tin Woodsman --

How satisfied would you be with food service from a robot?

Will Robots Succeed With Hamburgers and Fries?

Can robots handle the work in a McDonald's restaurant? I estimate that they can handle it better today than a quarter of a century ago when the cooking was much more labor intensive. Today, the kitchen area or Back Line is simplified, with food cooked ahead of time and held in warming drawers.

In my day as a McDonald's manager, all the food was cooked fresh to order with a little extra for rush times; but in Ray Kroc's first kitchens, even the sauces and shakes were all hand made. The potatoes were cut by hand. Crew people did a lot of work for minimum wage in the 1950s and 1960s.

Robots can be programmed to include the floor plan of all areas of the restaurant unit and how to use all the equipment, products, cash registers, etc. Then the human tenders need to stay out of their way and watch for glitches.

Robots are being used in some cleaning processes by janitorial services, especially in the hospital environment. This came about as a result of the NASA Spinoffs development form aerospace investigations.

A money saving alternative worked well in Meridian, Mississippi for many years, until the franchise owners retired. They developed a counter with a cafeteria trail railing. Customers grabbed a tray, walking either right or left into one of two lines, and pulled their food items out of the warming bins as if they were in a cafeteria.

The Drive-Thru setup was the same as before, but fewer crew members were needed for serving and cashiering, so the extra savings was given in pay raises and used for maintaining a swimming pool out front, complete with a life guard. The dining area was home to several showcases of McDonald's memorabilia and museum-quality art pieces, so visitors enjoyed eating at this unit.

Other franchise owners developed Drive-Thur only stores, especially near major interstate highways. They were open 24/7/365 and proved most successful. Always busy, they facilitated streamlining. They also reduced their menu offerings to eliminated the most complex and costly items, which also increased savings.

Self-service drink stations have reduced costs for McDonald's in many locations, but not enough to absorb a minimum wage of $15.00.

Since the announcement of "Robot Stores", the price of a share of McDonald's stock seems to be rising slightly. Watching that stock will be interesting in the near future.

Are fast food restaurants becoming passe or will they recover?