Blessed with a Physician Father and Schoolteacher Mother, I acquired the gift of learning at an early age. The passion has grown ever since!

A couple going for a late afternoon stroll along Somerton Beach at the onset of summer in Adelaide notice a well-dressed gentleman relaxing against the sea-wall, smoking a cigarette. A short while later, another couple notice the same gentleman at the same location. The male of the latter duo makes the joking comment that the man seems unaffected by the mosquitoes swarming around him ...it's as if the guy is "dead to the world"... as they continue along their merry way dismissing the stranger as just having had a couple too many.

Early the next morning, the well-dressed gentleman is discovered in the same position as noted the night before. The man really is "dead to the world"!

This discovery of the "Somerton Beach Man" on the morning of December 1, 1948, marked the beginning of one of Australia's most confounding cases. With all of the amazing facts accumulated over the years, neither suicide nor homocide can yet be convincingly ruled out as the "cause of death".

Until a few years ago, the case was primarily confined to within the continent of Australia, however, interest in the body found at Somerton Beach has now grown to international proportions.

Fire across the desert : Woomera and the Anglo-Australian Joint Project 1946 - 1980.
Official publication of the Australian government. With many things no doubt vetted and sanitized. But for all that, it makes a surprisingly interesting read. It describes how Britain developed its nuclear weapons after World War 2. Though it contributed to the Manhattan Project, it did not want to become fully dependent on the US for nuclear armaments and technology. Plus, it soon became clear that the US was not sharing all of its nuclear knowledge with the British. In part because of leaks to the Soviets from within Britain.
Buy Now

More than sixty years have elapsed since the investigation began. Most of the key characters are now deceased and much of the original evidence disappointingly destroyed, but with growing exposure and the technology available today, progress has been made in recent years through the use of modern forensics, DNA analysis, internet accessibility and spreading curiosity.

As recently as September of this year, a request to have the body of "Somerton Man" exhumed was denied by government officials in Adelaide stating "...there is no verifiable family member to approve the request".

Additional requests of others now deceased and of key importance are also likely, as the case is still open and active.

Having previously written at length of this case, I will not go into all of the details here regarding the inability to identify the body, ties to the Australian nurse, the Cold War events in the area during the time period, ties to espionage, the

Woomera, and so on, since that information is now "old hat" and can be found through multitudes of online resources.

The Rubaiyat of Omar Khayyam: First, Second and Fifth Editions
Omar Khayyam's 12th century quatrains came to the public eye when translated and interpreted in English by Edward FitzGerald in 1859. Oft quoted and frequently looked to for inspiration by those seeking to live life to the fullest, this volume includes several editions of the works, allowing the reader multiple approaches to their wisdom and beauty.
Buy Now

As one delves into the details of the investigation, it seems to include all of the characteristics of a "Casablanca" style story-line with facets of romance, war, secret codes and intrigue.

Being that the one item of important evidence tying the man on the beach to all the other circumstances developed in the case was the finding of the last phrase from the final page torn from a rare (only 1 has ever been found) copy of Omar Khayyam's Rubaiyat, the case is commonly referred to as "The Tamam Shud Case".

I do wish to broaden the scope by pointing out other events that transpired in fairly close proximity to the Adelaide area. Some may not be related at all, but others are far too coincidental to not provoke inquiry.

A hub titled "The Beaumont Children" published several months ago on hubpages.com sparked the motivation for creating this article. The unsolved case described in "The Beaumont Children" also takes place at Somerton, but occurred eighteen years later in 1966. Though the similarities were striking enough to bring "Somerton Man" to mind, the differences indicate that they are most likely unrelated.

It is interesting, however, that the disappearance of the Beaumont children is remarkably similar to another case which is within the circle of cases referenced within the on-going "Somerton Man" investigation, that being the disappearance of a man and his son in the Adelaide area only six months after the discovery of Somerton Man - the Mangnoson case. Ten miles down the shoreline from Somerton Beach, the two were found - the boy dead, and the father, unconscious and near death himself. The father was hospitalized, but so badly traumatized that he was admitted to a mental hospital. He was unable to relate any of the experience to authorities. The wife reported that prior to the disappearance of her husband and son, she had been intimidated on several occasions and at one time, physically confronted at their home by a man wearing a mask and driving a car that had been seen suspiciously reconnoitering the neighborhood. The masked man specifically stated that she remain quiet in regards to the Somerton case. The husband had been involved in the identification of Somerton Man due to the belief that he may have worked with him at one time. 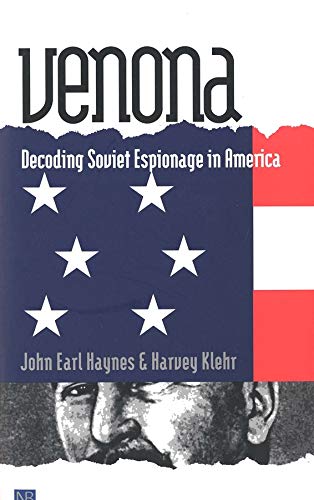 Venona: Decoding Soviet Espionage in America (Yale Nota Bene)
The Venona secret US army project of the 1940's was a monumental achievement in this history of American code breaking and one of the America's most closely guarded secrets. This book exposes the greatest domestic counter-espionage operation that has ever been launched against the Soviet Union.
Buy Now

Ties to Other Cases?

Soon after the war ended in 1945, another body had been found in Sydney with another rare copy of Rubaiyat lying open next to it. It was determined that Joseph "George" Saul Haim Marshall had been poisoned near where the mysterious nurse identified from the Somerton case (three years later) had been at that time. The mysterious nurse, known only as Jestyn, had given yet another copy of Rubaiyat to an Australian Army officer only a few months after this incident in Sydney. The officer was believed to have been the unidentified man found at Somerton, until he was found alive and in possession of his copy of the Rubaiyat with its last page still intact.

The two rare versions of the Rubaiyat tied to the deceased men, were found to have been different editions from the same New Zealand Publishing Company, Copies of neither of the two rare editions of Khayyam's poems have ever been located, documented or identified.

In August of 1945, three months after Marshall's death, a hairdresser named Gwenneth Dorothy Graham who had dated Marshall was found drowned in her bathtub - facedown.

An interesting 3 part podcast about the latest findings on the case can be found at Astonishing Legends. Originally intended to be a 1 part series, the subject has enthralled so many, including the hosts Scott Philbrook and Forrest Burgess, that 3 parts would be inevitable with even more episodes very likely in the near future.

Part 1 is only a teaser consisting of the initial clues available to investigators. As the story unfolds, the theories and possibilities grow exponentially.

Part 2 contains an interview with Professor Derek Abbott who has devoted many years to the case and is one of the top authorities on the investigation along with Gerry Feltus, who has published the most detailed book on the case.

Part 3 is a summary of the evidence and the conclusions of the hosts, which may or may not be even close to the truth.

As DNA testing becomes more commonplace, thanks in part to the rise of interest in genealogy research and documentation, a major obstacle in putting some form of closure on Summerton Man has been gaining the legal authority to exhume his remains. There are currently multiple fundraising efforts being conducted by interested and curious parties, as well as an ever-growing petition in an attempt to gain the approval of government officials for the exhumation of Somerton Man.

As long as unsolved mysteries remain unsolved, the speculations will never cease. I could write on and on regarding this topic and all of its "satellites", but in the spirit of being brief and concise, I will wrap it up at this juncture. There can always be more to write further down the pike.

It is often phrased that "truth is stranger than fiction". The mysteries of Somerton are quite exemplary of that adage. The more one digs into the known and documented facts surrounding Somerton Beach and the "Tamam Shud Case", the more fascinating and intriguing it seems to become.

And the comments from other enthralled readers are just as interesting as the story itself.