In September of 2013, a Gallup poll showed that Americans were by and large against any further military action in the Middle East. When asked if the U.S. should conduct military strikes against Syrian president al-Assad - ostensibly on the basis that he had used chemical weapons on civilians (still unproven) - 51% of all Americans polled voted against it, and only 36% voted in favor. This was the lowest pro-war numbers that Gallup had collected in 20 years.

Two beheadings on YouTube later, those numbers have inverted; a poll conducted by YouGov.com in August of 2014 showed that 63% of Americans now back a Pentagon strike against ISIS, with only 16% in opposition. It's amazing the difference one year can make.

Although the American public has been bombarded with images of the barbaric violence unleashed upon the civilian Shiite and Christian populations in Syria and Iraq, these images do not begin to explain the cause of the conflict; without that bit of information, all decisions to engage in war can only be based on an emotional reaction to ISIS - namely, fear.

Fear Mongering vs. The Facts

Senator Lindsey Graham and Senator John McCain have spared no expense banging on the drums of war wherever and whenever the opportunity has arisen, Graham going as far as warning Americans that if President Obama doesn't react militarily - and soon - we can expect ISIS "are coming here." How a terror organization can successfully infiltrate the world's greatest superpower if that superpower focuses its ample resources - the NSA'S $2 billion-a-year PRISM Program comes to mind - on securing its own borders as opposed to squandering its resources on offensive strikes abroad, is a question for the mystics. However, offensive air strikes (and a formidable ground presence, if Graham and McCain had their way) are the only options being discussed on the Hill.

Deep down, most Americans understand that you can't bomb an ideology out of existence; air strikes do not address the root cause of the ISIS phenomenon, and the vast majority of Americans know that they lack the knowledge of "Sunni vs. Shiite" Middle Eastern politics to identify the origins of the never-ending conflict in the region.

Emotionally however, bombing makes some Americans feel "safe," as if the U.S. can effectively end the threat through brute force. This faith in the Almighty Military is more palatable to some Americans than the truth of the matter - that the conflict in the Middle East will most likely never end, and as long as the U.S. is involved in OPEC oil, we will continue to face threats from terror networks. If bombs worked, then President George W. Bush's wars in Iraq and Afghanistan would have ended terrorism; instead, terrorist organizations have flourished since U.S. involvement in the region. Instead of learning from our past mistakes, our elected officials have opted to repeat them, arguing that somehow, this time it will be different; it won't be. Here's why.

A Rose By Any Other Name... 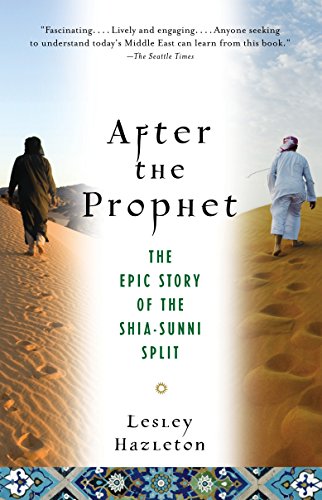 After the Prophet: The Epic Story of the Shia-Sunni Split in Islam
Buy Now

While the vast majority of the world sees no point in arguing over religion - in fact, with the Millennial trend of abandoning religion altogether gaining speed - most people have a difficult time grasping the "Sunni vs. Shiite" conflict in the Middle East. Basically, Sunnis and Shiites differ on who should have succeeded Muhammad after his death in 632. Sunnis supported the succession of Abu Bakr, the prophet's friend; Shiite Muslims felt the rightful successor was the prophet's son-in-law and cousin, Ali bin Abu Talib. Yes, that's it.

According to the CIA World Fact Book, roughly 60-65% of the world's Muslims are Sunni, with only 32-37% Shia; ISIS is a Sunni group, fighting the brutal oppression imposed on the Sunnis in Iraq after the U.S. take down of Saddam Hussein empowered Prime minister Nouri al-Maliki's Shiite government. The majority of Syrians are also Sunni, while its leader - President Bashar al-Assad - is Alawhite, a sect of Shi'a unrecognized as being Islamic by ultra-conservative Muslims, such as the Wahhabi that rule over Saudi Arabia and Qatar. Clearly, the Sunni uprising in Iraq and Syria is an attempt by the majority to retake control of said territories and their resources from ruling Shiite governments.

The Religion of Oil: A Map

Sleeping With the Enemy

Although President Obama has hailed the recent "alliance" with five Arab nations against ISIS - Bahrain, Jordan, Saudi Arabia, United Arab Emirates, and Qatar - as a sign that U.S. strikes against ISIS are not "America's fight alone," the truth of the matter is that the vast majority of the air strikes were - and will continue to be - conducted by the United States.

Europe has judiciously opted to remain disengaged, as has China; firstly, because war is costly, and secondly, because neither China nor Europe stands to gain from involvement in the Syrian or Iraqi civil wars.

So why are we involved? You see, it's not that we need the oil ourselves per se, but that we need the oil to be sold exclusively for dollars if our currency is to remain solvent. Because of this, it is imperative to U.S. interests that Middle Eastern governments in oil-producing nations are friendly to our cause. And that is why we are involved.

It is safe to say that If it weren't for the Petrodollar and our currency's value being tethered directly to OPEC oil, the U.S. wouldn't be so willing to sacrifice trillions of dollars and thousands of American lives on the religious/resource conflicts of the Middle East.

But it is, and therefore, we are.

Each of the five Arab nations allied with the U.S. against ISIS are ruled by Sunni Muslims, including the Kurds that we've armed in Syria and Iraq; why would any of these groups be expected to fight ISIS, a Sunni organization?

They wouldn't. But a war in Syria and Iraq would destabilize, and possibly depose, the Shiite governments there, effectively expanding Sunni influence over the territories and Sunni control over valuable resources.

If, in fact, this were to occur, that would leave only Iran - Saudi Arabia's greatest adversary - as the sole major Shiite government in the region.

Appeasing the Saudis might temporarily protect the U.S. Dollar from a complete meltdown, but it will not protect America from the violent backlash from Shiites and Muslim nations that seek self-determination.

And this is why bombing ISIS will not, in fact, keep Americans "safe."