Kenny is a keen and enthusiastic biblical knowledge promoter, gospel apologist, a fighter in God's army, a defender of the Christian faith.

Secular as well as biblical history made it clear the regions name Canaan predates the name Land of Israel a later title which describes the same territory. Bible history students points to the classical Jewish view, as explained by Schweid, is that "Canaan" which was the geographical name and the renaming as "Israel" prior to its conquest by the people of Israel under Old Testament leader Joshua. This they “Israelis” claim marks the lands consecration, the origin of the Holy Land, concept. However the province of Judaea, was later renamed Palestina, by the Romans general Hadrian following the Bar Kokhba, revolt in the 2nd century, AD. This was an obvious insult to the Jewish people, a severe punishment by the Roman overlords for the constant pain inflicted by Jewish militant’s constant revolt and guerrilla warfare committed against Roman occupiers of the land. In the Biblical narratives and in external literatures, Zion, originally refers to the area surrounding Jerusalem, however, due to the city’s significance, the whole land is referred to as Zion or by more sentimentalist holy hills of mount Zion. The biblical version of events revealed that God appeared to Abraham and promising that he and his descendants would inherit “a land flowing with milk and honey”.

Through the leadership of Moses and his brother Aaron, God freed the people from Egyptian slavery with the foreordained plan, to occupy the Promised Land and worship Yahweh only. On the verge of entering the land under Moses Leadership the Israelites rebelled, causing God to keep them in the wilderness for an extended period. The people’s rebellious attitude causes Moses to err which robbed him of the opportunity to enter the land after years of wondering in the desert. Which must have broken Moses heart, cut him to the core of his being, working so hard to achieve that goal, and just when he was about take hold of it, it was snatched away, but God soothes his disappointment by taking him into the mountains giving him a glimpse of the land? The Biblical records revealed Joshua who would be Moses successor, later known as the most militaristic of Israelites leaders because of the many war campaigns fought to subdue the peoples of the land and that the tribes of Israel would finally settled. Joshua shared in all the events of the Exodus and was widely seen as Moses' replacement, who stood by Moses on several occasion, and went with him half the way up Mount Sinai to receive the Ten Commandments (Ex. 32:17). Joshua was also among the twelve spies that were sent by Moses to view the land of Canaan (Num.13:16, 17), he and Caleb only gave positive reports. Moses chose him to be leader and commander of Israelites forces after freedom from Egypt, against the Amalekites at Rephidim (Ex. 17:8-16), in which they were triumphant

After successful campaigns of routing the Canaanite dwellers of the land the Israelites discovered that the city of Jerusalem was occupied by the Jebusites a native Semitic tribe, and ruled by King Adonizedek. Some bible scholars believed this King Adonizedek was the same Melchizedek that met with Abraham many years earlier; some contend that the evidence does not lead to such a definitive conclusion given the difference in time among other things. However, the fear of the Israelites successes spread through out the whole land and surrounding neighborhoods, causing terror and fear among the people and the fortifications of the city. A terrible fear gripped Adonizedek thinking his people was no match for the Israelites form an alliance of Canaanites kings to form a resistance army but they were routed by Joshua’s forces. Joshua began the task of land distribution between the twelve Israelite tribes. “Judah could not dislodge the Jebusites, who were living in Jerusalem; to this day the Jebusites live there with the people of Judah” (Jos. 15: 63 NIV).

With his strong fortifications Jebus, a descendant from Noah’s third son Canaan was able to continue living in the city where his descendants established it as a fortified town even to the time of David. The bible revealed that the city was burnt after it was captured by the tribe of Judah (Judge. 1:8) however some Jebusites descendants were allowed to continue living in the city, and later regained dominance. David upon becoming king of Israel identified the strategic significance of the city, and developed a burning desire to regain control of the city, but as a military strategist soon recognized the difficulty that lies there in. The Jebusites recognized and was proud of the strengths of their defenses; they throw scorn on David’s men mockingly, “The king and his men marched to Jerusalem to attack the Jebusites, who lived there. The Jebusites said to David, "You will not get in here; even the blind and the lame can ward you off." They thought, "David cannot get in here." (2 Sam 5: 6 NIV). David uses tactics by offering army positions of chief and captain to his men if they captured the city. The men captured the city of Jerusalem and it became David’s seat of power the capital of the United Kingdom of Israel and Judah around 1000 BC. Psalm 24 is seen by scholars as a celebration to the capture of the city and boasting of the successful capture and defeat of enemy. Jerusalem is often referred to as the city of David, the city of God or Holy Mount Zion. Archeologists have interpreted recent excavations of a “large stone structure” which has provided credible and undeniable evidence to the biblical version of events.

The narratives identified the much celebrated King David reigning over a United Kingdom Israel for around forty years, first reigned in Hebron over Judah for seven and a half years and in Jerusalem over Israel and Judah for thirty three years. One of David’s many sons Solomon became king over the United Kingdom and later began building the Temple his father made preparations for but could not build. This Temple of Solomon, (later known as the First Temple), went on to play a essential role in the history Israel, many referred to as the final resting place for the Ark of the Covenant that travelled with the people through out their wilderness wonderings. The city remained intact for about four hundred years, but was destroyed in 586 BC by the Babylonians including the temple. King Solomon's died around 930 BC, after which the ten northern tribes split from the south forming the northern Kingdom of Israel. Jerusalem remained the capital of the Kingdom of Judah in the south under the leadership of the house of Solomon. Around 722 BC Kingdom of Israel was the first to be conquered by the Assyrians under King Shalmaneser V, a defeat which saw the southern kingdom of Judah strengthened by a great flood of immigrant from the northern kingdom. Archeologists and some history students believe the evidence of the fall of Jerusalem is gathered from questionable records based some inaccurate dates. Some theologians believes Jerusalem was conquered between 606-607 BC but, no historical evidence supported the year 607 BC as the 18th or 19th year of King Nebuchadnezzar. They points to Zechariah 7:1-5, which proved the year 587 BC as the complete and final attack on the city by the Babylonians. 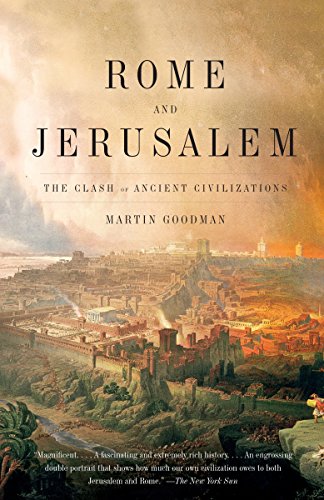 Rome and Jerusalem: The Clash of Ancient Civilizations
Buy Now