DECEMBER 11, 2012, MICHIGAN became the 24th state to pass a "Right-to-Work" law in the latest assault on union power. In their heyday, and in reaction to the terrible working conditions required by many large employers, unions became fairly powerful (and ultimately corrupt themselves). Some of the laws unions were able to get through most state legislatures were ones which made it illegal for employers to try to break unions through hiring non-union workers that were exempt from paying union dues. This was done by requiring any newly hired worker to pay union dues whether they belonged to the union or not (I am sure there are many variations, but that is the essence of it.)

Businesses, and their conservative allies, have waged a decades long campaign to undo this edge unions have in their power struggle with employers over the ability of employees to protect themselves from employer abuse through joining together in a union. Their methodology is to get Republican legislatures to pass so-called "Right-to-Work" laws that prohibit unions from collecting dues from non-union workers, even if they receive the same pay and benefits won by the unions; as time continues to on, business is slowly winning this war.

What people forget, because history no longer seems to be important to most Americans, is that it was less than 150 years ago when businesses, the federal government, most state governments, and the courts, including the Supreme Court, were all lined up against the American worker. Every attempt to improve the condition of the worker, which, for the most part was atrocious, by the more enlightened states was opposed and defeated by the federal government and courts because it was "bad for business". It wasn't until the late 1800s and early 1900s when opposition at the federal level began to recede. It was only in 1935, with the Wagner Act, were the rights of workers to organize protected by the federal government; that was only 72 years ago. Finally, from the 1950s on did the federal courts start siding with worker's rights. Conservatives have been trying to weaken these advances in worker's rights ever since.

Up to this point you all probably think I am a very pro-union kind of guy; and you would be right. There is significant evidence everywhere workers are being more and more abused by their employers as the power of unions continue to weaken and business takes advantage of the poor economic times. Nevertheless, and hold on to your seats, I actually agree with the "Right-to-Work" legislation such as that passed in Michigan.

WHAT?!!! Yep, I do. I agree with it for one fundamental reason, and it has nothing to do with helping business; I do not believe the right of an individual to earn a living should be abridged because, regardless of the reason, they do not want to pay union dues. To me, that kind of law flies in the face of our basic concept of liberty; it is just like saying you can't be hired because you are black. That is it, no more complex than that.

Will this weaken unions, unfortunately yes. Consequently, some other method must be found to guarantee their survival, for unions are essential for the good working order of society; it just not be the abridgement of a fellow American's freedom to work where he or she wishes.

AND WHAT ARE YOUR THOUGHTS?

Do You Support or Oppose "Right-to-Work" Laws? 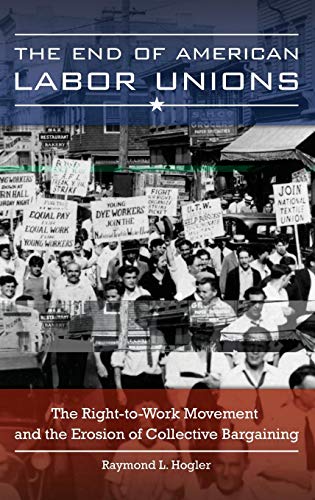 The End of American Labor Unions: The Right-to-Work Movement and the Erosion of Collective Bargaining
Buy Now