Pinappu is a voracious reader and a writer who loves to make his research before writing anything.He is interested in the economy of Africa.

The Wealth of Africa

Africa is known for its wide scale poverty and long lasting civil wars and instabilities. However, despite all the problems Africa is now growing rapidly. It is now waking up after a long slumber. The result of it is now starting to show.

Some of the African nations are now middle income countries. Here you can find about the top 10 richest countries of Africa. These countries are grouped by five categories – 1) GDP Nominal, 2) GDP PPP, 2) Per Capita GDP (Nominal), 4) Per Capita GDP (PPP) , 5) Annual growth rate and 6) HDI.

Nominal GDP is the total market value of the final services and products of a country in a year. Here, GDP nominal is calculated by means of US dollar because it is the most widely used international currency off the world.

Nigeria is the most populous nation of Africa with a population of 186 millions. That population is also growing fast generating economic growth as well as potential problems. Nigerian economy is the largest in Africa and 20th in the world by GDP. It is mostly due to its huge petroleum reserves. Due to the export of petroleum the country maintains a trade surplus. However, 46% of its population is still below poverty line. Lagos is the largest city of Nigeria and also of Africa.

South Africa is the most industrialized country of Africa. It is far more developed than other Sub-Saharan countries. It is also well known for its mines of diamonds and gold. Despite all these, the country is troubled with high income inequality and youth unemployment. South Africa is known for its advanced cities like Johannesburg, Cape Town, Pretoria and Durban.

After the market reforms of 2000, the economy of Egypt has grown at a high speed for a few years. However, the revolution of 2011 has put a break on it. Now, the country is suffering from high inflation rate, unemployment and underemployment. There are also the problems of big trade deficit and budget deficit.

The Mediterranean country of Algeria has a strong economy. However, it is heavily based on exporting oil and gas. The country earns much needed foreign currency by sailing oil and that large foreign reserves could be used to diversify the economy.

The south-central African country of Angola was ravaged by the 27 years long civil war. After the end of the war the economy grew at a super high speed (11%) for almost a decade. However, the fruits of that growth are concentrated among a few powerful people. The economy is heavily based on oil.

The economy of Morocco is known for being liberal and competitive. It is a more than 100 billion economy despite of not being oil rich. The country is known for its booming tourism and services sectors.

A country could be more costly than another. That’s why PPP or purchasing power parity is used to understand the relative GDP of different countries. Egypt is the richest African country by GDP (PPP) and Nigeria comes next. Both South Africa and Nigeria are trillion dollar economies by PPP measurements.

If we compare this list with the nominal GDP top 10 list we can see that Kenya is out of the 2nd list and there is a new entry, Libya.

Top Ten List of African Countries by GDP Per Capita

While the total GDP of a country indicates the overall wealth of that nation, per capita income is the indicator the financial condition of the people of that country. So, this is another method to know how rich a country is. According to this list the peoples of Seychelles are the richest in Africa, followed by the citizens of Equatorial Guinea and Mauritius.

Seychelles is a high income island nation. It is a tiny country with a small population. The economy is heavily depended on tourism. As a result it is vulnerable to external shocks. Seychelles is also known for its tuna exports.

Equatorial Guinea is a small West African country. EG has become rich by exporting oil. However, all the wealth is concentrated in the hands of a powerful few and most of the people are not that rich. It is one of the most corrupt nations on earth.

Mauritius, Gabon, and Botswana - The Nations with Prosperity

The Republic of Mauritius is a beautiful island nation situated in the Indian Ocean. It is a successful democracy with high human development index. The small nation is known for its tourism industry and financial services.

Like the neighboring Equatorial Guinea Gabon is also a petroleum rich small country. Despite having high per capita income, the a third of population are below poverty line. The country may be in serious trouble in near future because its oil reserves are depleting very fast and could be emptied within 2025.

Botswana is a land locked country of 2.2 million people with extremely low population density. It has the longest uninterrupted democratic government of Africa. It’s a country with very good economic prospect. It has shown constant economic growth for decades. Its economy is mainly depended on mining, especially diamond mining. It is the least corrupt among the African countries.

List of Top 10 African Countries by GDP (PPP) Per Capita

PPP adjusted per capita income shows the real financial condition of the people. The top 5 of both the lists of GDP per capita is almost the same, except the exchange of top two spots. With the PPP per capita of $34865, the citizens of Equatorial Guinea ranked 36th among all the nations on earth. Seychelles also ranked within top 50. These high income countries are even richer than some European countries including Russia and Greece.

Equatorial Guinea And Gabon On A Map 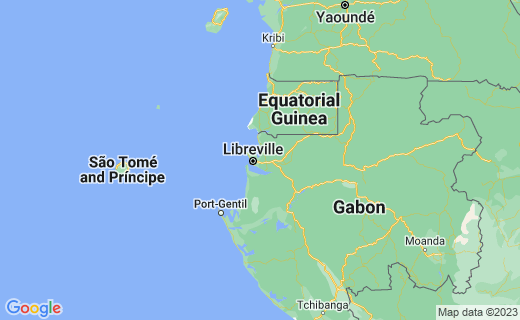 Growing at A Breakneck Speed

If you look at the list of fastest growing African economies we will see the insane growth rate of 55% of Libyan economy. It was growing so fast in 2017 due to the end of civil war. It reflected the normalization of economic activities which were halted due to the war.

The economy of Ethiopia has been growing fast from the year 2004. In fact from 2004 to 2017 the economy has grown more than 10% in 11 out of 14 years which is a very impressive record. However, despite such rapid growth it is still a poor country. It is expected that it would achieve the middle income status very soon.

The real wealth of a nation is its people. Human Development Index or HDI is an index to measure the overall quality of life of the citizens of a country. HDI is determined after considering number of factors like per capita income, life expectancy, and education. Some experts give more value to HDI than GDP to determine if a country is developed or poor.

HDI value of more than 0.700 is considered High Human Development. The medium HDI nations score between 0.556 to 0.699. There are 7 African countries with high HDI and 14 with medium.

Seychelles with its HDI value of 0.797 is the best country for its citizens in Africa. The 2nd best in this list is another tiny island nation of Mauritius. Algeria is a bit behind with its 0.754 score. All of these three countries have better HDI than China. Other high HDI African nations are Algeria, Tunisia, Botswana, Libya, and Gabon. All of these nations have better HDI than India.

The Beauty of Seychelles

Economy of Africa - The Future

The African countries are now trying to form continent wide intergovernmental trading unions. African Union (AU) is the largest and most influential among them. AU is trying to create an EU style pan-African free trade zone, a huge single market, a development bank and a single currency. It could help the African countries massively.

Which Among These African Countries Will Become A Developed Nation By 2040 ?