Paul is recently semi-employed and has come back to HubPages to write about what strikes him at a particular moment.

Have I changed or the world around me?

I started on HubPages in 2010 and my last article was on 7/9/2013. Over six years ago. Can it be that long? Why did I stop writing? Life changes. Things change. And in rereading some of those articles, I have changed. Or have I? Maybe it is the world around me that has changed. After all, for the most part, I still have the same values I always had. I still believe in the same core principles of how government should work. I still believe that the world’s moral compass has turned upside down. The rest of the people don’t. So now it is me who is the disillusioned one.

Back in 2010 I, and others like me, thought we could make a difference. I thought I could get involved and help to bring about change.

A bright light at a dark time

Back in 2010 I, and others like me, thought we could make a difference. I thought I could get involved and help to bring about change. Until I realized it wasn’t going to happen, it took three years. It is the system that is the problem. Here is an example. Some of you may remember one of the heroes of the Tea Party movement. A young candidate for the Senate in Massachusetts by the name of Scott Brown. True, he later claimed he never was a Tea Party candidate. He was running to win the seat made vacant by the death of Sen. Ted Kennedy. Kennedy was a democrat; Brown was a republican. It had been a long time since a Republican held a senate seat in Massachusetts. It had been a long time since any republican from Massachusetts held any national office. Here comes a guy with all kinds of great ideas. Things like smaller government, fiscal responsibility, and bringing common sense back to the government. It struck some nerves for a lot of people in this state and the country. It was the right time.

And look what happened, he lost and lost big. Not only did he lose, but he lost to Elizabeth Warren.

Don't jump. it's not worth it

Scott Brown won. Two years later he lost. Why? I believe it was because he sold out to the establishment. He threw away all those great ideas that got him elected. He only worried about getting reelected. He compromised on his values. He could have shut down Obamacare. He didn’t. Like all politicians from the beginning of time, he only worried about getting reelected. And look what happened, he lost and lost big. Not only did he lose, but he lost to Elizabeth Warren. Although I was not surprised, I was ready to jump off a bridge.

So many lights, so many extinguished

And that was only the beginning. There have been others since, too many I can’t even remember their names, nor do I want to. Since the last time I wrote here, we have gone through two terms of one of the worst presidents we ever elected. We are suffering through a half term of one who seems to not be far behind on the same list. As we look forward to another presidential election in 2020, will it get any better? Will we really have a choice? Will it make a difference?

The Middle of the Road

It’s funny but I no longer even know how to categorize my political beliefs. I used to consider myself an independent with conservative, right, republican leanings. But I can’t say that any longer, not since the republican party had sold itself out. As far as being conservative, I am still one, but not according to the current definition. The same goes for being on the right. I guess I'll call myself a middle of the road person, at least until they repave the road. Or close it.

In a world where people seem obsessed with labels, I don’t have one. Actually, maybe I do, blank. Can I have a blank label, one made out of whiteboard (can I say whiteboard without getting into trouble?) that I can erase and write something new on to fit the particular situation? Or better than that, how about no label?

So here we are in late 2019. What will I write about now? Who knows? I suppose much as I did five years ago, I will write about whatever moves me at the moment. I know I’m older, and I even consider myself somewhat wiser. I guess we’ll just have to see what happens.

My Camera of Choice 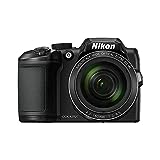 Nikon Coolpix B500 Digital Camera (Black)
Do you like the pictures in this Hub? This is the camera I use.
Buy Now