Why Democrats Will Lose The Midterm Elections

The Midterms Are Coming

So what happened? Barack Obama and the democrats gained overwhelming victories in November of 2008. George Bushleft the country in a mess. The economic world was ending, two wars were waging without purpose or leadership, America's respect around the world was lost, etc, ect, etc. Now, the economy is slowly improving, one war actually has ended its combat mission and the other war is better managed and respect around the world is back. So why are democrats in retreat. Why are predictions so bad?

The first reason why Democrats will lose the midterm elections is because historically the party that wins a Presidential election loses the next midterm elections.  The cause of this is somewhat complex however.  Some of it has to do with internal checks and balances.  Americans historically have shown that they prefer a split government and never allow supermajorities to exist too long.  Bill Clinton won the Presidential Election in 1992 and by 1995 his party lost huge in the midterm elections.  History shows this trend over and over again.

But this ties to the second reason, generally the party that loses regroups and refocuses, and comes out stronger.  And it is always easier to be the opposition party, all you have to do in point out anything bad that has happened.  But generally the opposition party gets it together and is ready to go.  After Bill Clinton was in 1992, the Republicans developed the Contract with America, got some young blood into the party and were an opposition party will a clear plan.  They were a force to be reckoned with and the democrats were not ready and the Republicans won the majority.

But what is the reason for the predictions that Democrats will lose so big this year? The historical trend will surely play a role, but the opposition party this year does not have its stuff together. They have no clear plan to move the Country forward like they did in 1994. There is internal fighting in the Republican Party between moderates and conservatives. Tea Party members are claiming that many Republicans are not true Republicans. The Republican primaries have been some of the nastiest elections in History.

So if it is not the opposition party that is causing the democratic loss, what is? The answer is painfully simple: Democrats right now are just that bad.

Harry Truman remarked that "the Buck Stops Here" when speaking about the Presidency. So President Obama deserves some of the blame for the fact that the Democrats are in disarray. The real problem is that you don't have to look very hard to figure out why Obama deserves some blame. Candidate Obama was a sight to see. First he took down the Clinton Machine and against the wishes of the Democratic establishment. He was the candidate with a funny name that spoke about hope and who gave speeches that moved mountains. He inspired young and old, black and white, even many conservatives because listening to him simply made people feel good again.

And this is President Obama's greatest flaw and biggest disappointment. Instead of being himself, he is trying to act the way people think a President should act. He is trying to sound Presidential. He is still trying to convince people that he can be President, instead of just doing the job. And the people around him are trying very hard not to make anyone mad. This is simply not the way it is done. Presidents are paid to make hard decisions. They are paid to get the job done. Nobody respects someone who won't make decisions, won't accept blame, doesn't take risks. So the candidate of hope is the President of fluff, and this is why his mojo is gone. He better find it quick or his majority will be gone and his job will be gone in 2012. Mr. President, instead of trying to act like a leader, just lead and convince people your way is the right way to go.

It is sad to say but is there are more inept and incompetent group that Congressional Democrats? Seriously, who do these people think they are? They appear to believe that the democratic victory in 2008 had something to do with them when in fact it had nothing to do with them. They believe you can lead without making hard decisions and taking sides. They honestly believe that they are answerable to no one and are entitled to be there. November will teach them they are wrong unless they change their story quickly.

The two leaders of this junior varsity team are Nancy Pelosi and Harry Reid. And each in their own way have managed to undermine the President and cause Americans to lose faith in the democratic party without actually doing anything. Pelosi's work on the HealthCare bill is the work that made Republican strategists smile. Reid with his complete inability to garner support for anything is the perfect example of democratic spinelessness. Seriously, who put these people in charge?

Can I Have My Change That I Can Believe In Please?

In nearly two years Democrats have halted the economic crisis and the economy is on the rise again. The combat mission in Iraq is over and because the President didn't land on an aircraft carrier and declare mission accomplished so is American moral superiority. The war in Afghanistan is still waging but there is a clear mission and an exit strategy. Jobs are coming back. The environment is a priority again. Education is a priority again. Yet, the perception is that Democrats are going to lose, why?

Because they deserve to lose. Because Democrats are no longer tough. Because Democrats are no longer willing to fight for what they believe. They have abandoned democratic principles are have gone way to the right, yet still let the other side call them Socialists. There hasn't been one terrorist attack under Obama's first two years, a claim his predecessor cannot make, and yet they let Republicans call them weak on defense. Teddy Kennedy fought for universal health care his entire career, yet Democrats were too afraid to even introduce it so now there is a reform package in place that doesn't really reform anything and helps corporate interests, yet they still allow Republicans to call it a government takeover. Democrats have simply allowed the Republicans to characterize them anyway they want without a fight.

Republicans are willing to say or do anything to win and they are not afraid of a fight. They will even tear each other down for what they believe. Democrats right now refuse to fight. They refuse to stand up for what they believe, in fact, they won't even state what they believe in. Democrats are afraid to make anyone mad. They don't want to say no. They don't want to make hard decisions. If you are not willing to fight, how can we be called upon to trust you. How can voters believe you if you don't act like it is important? Get it together democrats, or you will lose, and for that you cannot blame George Bush. 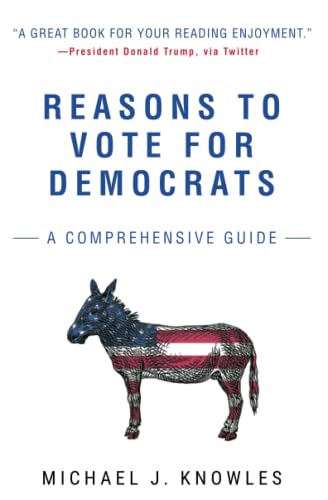 Reasons to Vote for Democrats: A Comprehensive Guide
Buy Now