Why Do We Ask Government For Help

Why do we ask government for help?

Original Question : Why do we ask government for help?

The point of The Constitution was to restrain the power of government. Today we want to give more power to the government. Really the more power we give them, the worse things get for the people. I am curious, why are people still looking towards government for solutions? Government solutions cause more problems. The problem isn't the corporations, it is the govt helping the corporations. Corporations are the ones who write the regulations. Corporations benefit from regulations because it eliminates competition, thus all the problems we see. Then govt explains, we need more regulations.

The Truth About Government Solutions

Dr Billy Kidd, I am talking about the federal government. Police is at the state level. Military might have invented the internet, but the market place made it glorious. In fact, government hasn't invented most of the things we use.

When govt funds school it inflates the cost and tuition is higher. That is why tuition is so high right now. Kid used to be able to work and save money to pay for college. The federal government is not supposed to be involved in education. If anything it should be dealt with at the state level. If it is at the state level, there would be more competition and more options for school.

We have pretty bad education, and while the federal government is running it, I don't see it getting better. The government got involved in education around the time woman started working. They basically broke up family values when both parents started working, for two reasons. First, so they could tax the other half of the population, meaning woman. Second, so they could get kids into school earlier and indoctrinate them how to think. Just because government isn't involved in education, doesn't mean that you wouldn't have an education. 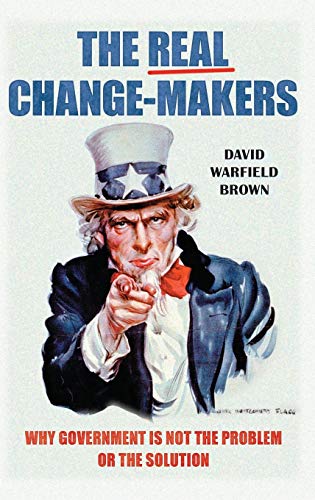 The Real Change-Makers: Why Government Is Not the Problem or the Solution
Buy Now

If government wasn't involved, higher education costs would come down and there would be more competition in education. As for inventions, government didn't invent the telephone, automobile, computer, airplane, camera, and many more things. All of these were invented by individual people and the market place. Government funded the building of the internet, but the market place made it great. They didn't build Myspace, Facebook, Youtube, HubPages, Yahoo, Google, and many other websites you visit.

All these things government does is at an expense. If there is a need for something the market place will build it. Government can do things but it comes at a cost to tax payers and usually they push prices up and quality goes down. You can see all the areas government regulates, such as education, healthcare, and energy prices are going up and quality is coming down.

But take for instance the cellphones. Government hasn't regulated cell phones and look how cheap they have become and how advanced they are. If government were to regulate cellphones and you had to get your cellphone from the government it wouldn't be efficient. The cost would sky rocket and the quality would be horrible. The reason cellphones are so great is because there is competition in the market place. There are many companies competing with each other and keep innovating. When government is involved in areas in our economy, they have no competition so they can produce whatever they see fit.

They can't build anything without raising costs because the money comes out of no where. They just print it. Look at all the wars we are involved in. We have soldiers blowing up trucks because they get flat tires, we are spending $1000 dollars on toilet seat. You see the more money we spend on those wars, the more money Halliburton makes. Halliburton is able to over charge for things because it is insured by the federal government. So the more things they blow up the more money they make. I know it sounds like we need government, I get what your point is. But I'm sorry your wrong. The more government gets involved in our lives or using force around the world the worse off we are. The market place creates prosperity. I'm not saying we don't need laws or there should be chaos, I'm just saying g