Since World War 2, America has not gone to war with a congressional declaration. Going to Congress for a declaration of war is how our forefathers intended war to be handled in this country.

The results of this practice are disastrous wars like the Vietnam War, and decade-long wars against tactics (the Iraq War or "War on Terror"). Since concrete goals for these wars aren't set, they last forever, and the American people have no say in the matter.

To make things worse, we opt to shoot first. We've adopted a foreign policy of aggressive, preemptive wars - rather than using our great power as a platform for great diplomacy.

These policies effectively eliminate America's claim to be a righteous world power. Since World War 2, about 90% of the casualties of war have been civilian lives. In the Iraq War alone, over 135,000 civilians have died.

Any astute individual can understand how - just on civilian deaths alone - these practices are a serious threat to our national security.

The U.S. government spends billions of dollars propping up dictators in other countries, many of which have democratic election processes.

America currently operates on the idea that the enemy of our enemy is our friend. We spend ridiculous amounts of money buying allegiances around the world.

To add to the economic strain, we spend money bombing and rebuilding some countries in which allegiance cannot be bought. Then we portray those countries as the aggressors.

After War: The Political Economy of Exporting Democracy
Buy Now

The Economics of War

Some people are under the impression that war is good for the economy. The main argument being that war creates jobs.

That assumption could not be further from the truth. In every war, the economies of the countries involved are weakened. Although employment rates can go up during wartime, taxes almost always go up. Who do you think is going to pay all of those extra salaries?

A wartime country's currency is always strained, causing inflation. There are many reasons for this, but what this means to you is that prices will continue to rise on rent, groceries, gas, etc....

Only the powerful special interests, corporations in bed with government, and banks that finance these wars (sometimes both sides) stand to profit from them. 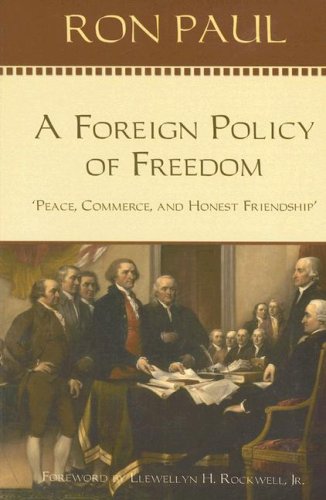 Ron Paul believes in a constitutional, non-interventionist foreign policy. He believes in free trade and friendship with other countries, and opposes the entangling alliances that threaten our national security today.

He strongly believes that the only justified wars are those in defense of our country, and that wars of aggression tarnish the name of our great country.

"Military force is justified only in self-defense; naked aggression is the province of dictators and rogue states. This is the danger of a new preemptive first strike doctrine." -- Congressman Ron Paul, 2002

Ron Paul seems to be the only candidate who knows that - even if we really believed that these preemptive wars were righteous - we cannot afford them anymore.

He knows that all great military powers throughout history have failed due to economic problems. It happened to Rome and the Soviet Union. They failed because their militaries were over extended, and their economies could not withstand the strain.

Will we go the way of Rome, or start electing men with the ideals of our founding fathers? In my honest opinion, electing Ron Paul would be a big step in the right direction.