Do Arguments Ever Settle Anything?

Do you know how 'Arguments' arise?

By definition Argument is a disagreement or a process of disagreeing. We come across all sorts of arguments in our routine life. Did you ever took sometime and thought about why arguments exist? Does in reality arguments ever settle anything? Is there a better way of resolving issues other than an argument? Lets have a close look at the nature and origins of arguments.

There is a story told of the six blind men who went to ‘see’ an elephant. Since they were blind, they could not see the whole elephant. Each felt a part of the elephant and each interpreted that the elephant looked like the part he felt. The one who touched a side declared that it was like a wall; the one who touched the tail declared that it was long & thin and so on. None would agree with the views with the views of the others; not having had the same experience. This simple story illustrates how arguments arise. It is a matter of each person in an argument seeing things only from his viewpoint while being unable, or refusing, to see the viewpoints of anyone else.

Do you know why 'Arguments' exists?

From birth we grow up seeing the world as dictated by our parents and other adults in or lives. Each of us is moulded to see the world in a certain way at the exclusion of others. In fact many of us grow up thinking that there is only one way of looking at things and are surprised when others do not see them the way we do. Actually this is a survival instinct. From a young age, each of us is trained to think in a certain way to ensure our very own survival. If we do not do what the adults want us to do, they will abandon us – or hurt us –so that we will shrivel and die. In times our way of doing things become habits and it takes a great emotional jolt to ever change our views. Hence we agree hotly that our views are right while all differing ones are wrong.

The only way we can win an argument is to make the other person see the same view as ourselves. Since it is likely that the other person is as powerfully programmed to his point of view just as we are to our, we never really win an argument. Of course, out of courtesy or fear, we can get another person to see our side of the picture, but to actually convince him/her about our correctness and to his/her ‘wrongness’ is usually impossible. Such being the case, arguments never really come to an end and are therefore never settled.

Since the issue involved is often about survival, or rather perceived to be so, arguments are apt to lead to deterioration of relationships. We could safely say that no two persons can see the world in the exactly same way. In that case, arguments will not be able to settle issue but they might make the situation much worse. This is what usually happens in the case of husbands and wives, siblings, friends, parents and children – even countries. We see arguments in the papers almost everyday where countries accuse each other of crimes such as ‘violation of human rights’, terrorism, ‘promotion of arms race’ and so on.

Close study of the arguments suggest that the parties have entirely differing views on what ‘human rights is’. Countries often claim that purpose of their arms is to maintain a power balance in the world while in reality they provoke others to get themselves armed. This is a modern day issue which is commonly debated among the world leaders.

In the domestic scene, what starts out as an argument sometimes ends abruptly and develops into a fight.  This goes to show how people will stand by their beliefs. In the case of countries they even lead to diplomatic rows.

So is there a better way to settle issues?

Since we have seen already that arguments never settle anything perhaps a better approach would be rational discussion. People usually agree on some issues. So when two persons, or countries, disagree on an issue, they could sit down and come to a rational discussion and then – regardless of who is right or wrong – work towards a solution that would make both happy. Sometimes it is not important just to be right. World is filled with all such examples where individuals, groups, political parties and nations have fought their heart out for various issues but have gained nothing in return. Arguments cannot drive conclusions and we see this all around us.

Today man has changed from the early days, when people lacked knowledge. Education has made man so independent that now he can decide for himself that what’s wrong and what’s right for him and there are no age boundaries on this. If you wish to convince someone you should come to common terms, the ones that are common in his and your views and once you manage to do that the next will be much easier.

Check Out Some Other Hubs By Valeed

Books that can help you make logical Arguments 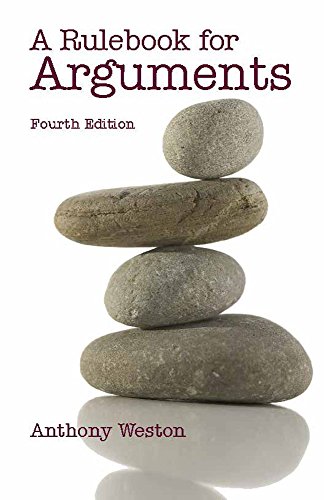