Who Owns the Federal Reserve Bank?

Federal reserve procedures in the USA began in 1913, and the organization is actually owned by a cartel of private bankers, This private organization has tipped the scales on the balance of power in American government, resulting in controversy and protest. The history and implications of this controversial issue are explored in this important book by Ron Paul, "End the Fed".

POLL: Should we END the FED?

Ron Paul presents a plan in his book "End the Fed" to eliminate our country's central bank and return to a private banking system. He predicts that action to 'end the fed' will eliminate inflation (since the US government can't print more money than it has gold reserves) but also will support a sustainable government in the US.

Maybe most important, he says that to 'End the Fed' would "disempower the secretive cartel of powerful money managers who exercise disproportionate influence over the conduct of public policy."

"The high office of the President has been used to form a plot to destroy the Americans freedom and before I leave office I must inform the Citizen of his plight."

— JFK 10 days before he was murdered

Who is Ron Paul?

He is an American author, physician and retired politician who served for many years as the U.S. Representative for Texas. He ran for president in 2008. While did not win the presidential election, his popularity has grown steadily among concerned citizens and in grassroots organizations. Not only does he eloquently demonstrate the underhanded lack of fiscal responsibility of the federal reserve, but also exposes the fact that they have manipulated the media and use their power to directly effect government policy.

Respected spokespersons and other money experts (such as Mike Maloney, Peter Schiff, David Morgan, Mike Dillard and Max Keiser, to name a few) agree that the federal reserve has gone way too far. They all describe, based on actual historical events, the path of the federal reserve bank throughout decades in the history of the United States in a way that is ugly, shocking and very difficult for many to grasp and accept.

So if you really pay attention to the 'federal reserve' issue as a questionable and controversial issue and give it due diligence in an objective way, you'll notice very opposite sides of the coin, with reports of 'news' from very different perspectives. 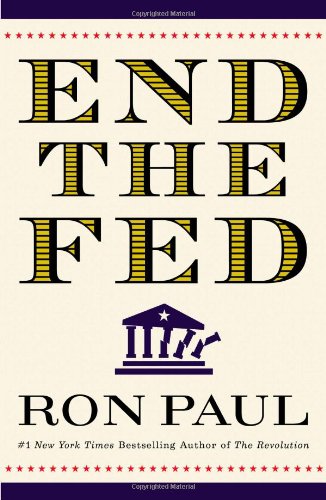 End the Fed
This book should be required reading for all Americans, and maybe especially by of our congressmen and senators BEFORE they take office! Regardless of whether you consider yourself a conservative, liberal, democrat, republican, libertarian, socialist, whatever ........ There is one thing we can agree on. The secretive operations by the FED needs more transparency. No more unchecked, unregulated, unsupervised actions. This book is not a "Conspiracy Theory book" like so many others about the fed. It does reveal how uneducated our elected officials are about monetary policy and economic theory. They also are not aware of the vast power the fed has to print money and basically tell Congress that it is none of their business what it is used for. This book reveals in detailed facts a clear cut case for shutting down the fed and returning to a responsible, sound, commodity based currency.
Buy Now

Do you support END THE FED?

Mainstream Media and End the Fed

Consider news about US politics and economy beyond mainstream media to know the truth.

If your main source of learning about government and world events is the usual mainstream media sources, then much of what you read here will likely be new to you. Will you dismiss it as some conspiracy theory?

Mainstream media does not broadcast these very real truths about the federal reserve bank. If you are one of those awakening people who is willing to dig deeper than your usual media sources for facts about our government and economy, then read on...

Who Owns the Federal Reserve Bank?

Federal Reserve - Show Me the Money!

'Nope, you can't make me'... says the Federal Reserve

Even our own elected officials are often not aware of the vast power the Federal Reserve has to print money and then use it in whatever ways they please. The fed can evade the questions (as in the video below), basically saying to Congress that it is none of their business where the money went.

In the interview below, watch her squirm and yet repeatedly deny any knowledge at all about trillions of dollars that disappeared from the Federal Reserve since September of 2010.

"If the American people ever allow private banks to control the issue of their money...the banks and corporations that will grow up around them will deprive the people of their property until their children will wake up homeless on the continent their fathers conquered!"

... who denies awareness of TRILLIONS of dollars in off balance sheet transactions conducted by the Federal Reserve since September of 2010!

No investigations nor auditing, yet trillions of dollars disappeared.

If Congress has a right under the Constitution to issue paper money, it was given them to use by themselves, not to be delegated to individuals or corporations.