An environmental enthusiast and activist her entire adult life, Kathryn shares her secrets to reducing waste and living greener.

You can fix all the world's problems with a garden

"You can fix all the world's problems with a garden." That's what Geoff Lawton, permaculture advocate and trainer, says in his video, "Greening the Desert."

I can't help but believe him, because what he and his team grew in one of the world's hottest deserts in just one year is astonishing.

Lawton and his team started with ten acres of desiccated salt desert in Jordan, just a few miles from the Dead Sea. Within ten months, they had turned that ten acres into a green oasis.

All around them, farmers hoping to eke out a living from the desert covered crops with millions of square feet of plastic in an effort to keep life-giving moisture in. They pumped millions--millions--of gallons of water to their plots.

Amazingly, Lawton's team used a tenth of the water on open land, without plastic covers. In four months, they had fig trees a meter tall.

Figs in the desert

Grow figs in the desert? Go from salt sands to humus-rich soil in a year?

Geoff Lawton and his crew accepted a challenge to pull verdant growth and fruiting vegetation from one of the world's worst salt deserts. In four months, they had fig-producing trees a meter tall. Not only did they produce figs, they desalinated the soil, or more precisely, fixed the salt so that it was no longer water soluble.

They accomplished all this with a minimum of irrigation water. That was in the year 2000. Take 5 minutes and watch this video. You will understand why Geoff Lawton says, "You can solve all the world's problems in a garden."

Is gardening a revolutionary act?

Fact is, growing and tending a garden just may be one of the most revolutionary acts any of us can do today.

Today, farmers plant acres and acres of fields with a single crop, stretching nearly as far as the eye can see, broken only by roads and the occasional farmhouse.

They spray their fields with poisons to kill every living thing except that lone plant. Then, they spray again with harsh, chemical fertilizers because the soil is now sterile and has nothing left to give.

Growing a garden that feeds, nurtures and waters itself may be the most radical action any of us can take.

And yes, we just might be able to obtain world peace and end poverty and hunger with our gardens, not to mention lower our own stress levels and improve our health.

Delve deeper with this fascinating book from Bill Mollison, the Father of Permaculture. Mollison was Geoff Lawton's teacher and founded the Permaculture Research Institute, which Lawton heads today.

If you are interested in designing a total permaculture environment in your backyard, on your farm, in your community, this is the permaculture bible.

Whether you are working with the long-term macro effects of climate change, or the microclimate in a section of your garden, this extensive manual covers the how-tos and is one of Mollison's most popular books on the efficient, beautiful, and just possibly planet-saving system called permaculture.

Can we truly solve world hunger, slow global warming and build peace with a garden?

It's true. If we're willing to give Nature the upper hand, we can grow a tremendous amount of eye-pleasing vegetation and food with much less labor.

If you think I'm pulling your leg about world peace, hunger and lowering the time and labor threshold, take a look at the video in the next module. It's short, but if you listen carefully, you'll see that all the elements are there, well, for the harvesting, you might say.

You can fix all the world's problems in a garden

Fukuoka sees the intensive, monoculture farming methods of Western countries as a chief cause for desertification. In a 1986 interview titled Greening the Desert, he tells reporters Robert and Diane Gilman:

"Seven years ago I took an airplane for the first time in my life and went to California, Boston, New York City. I was surprised because I thought the United States was full of green everywhere, but it looked like death land to me."

Later in the interview, he explains why food drops and traditional aid are not working in Africa, why we need to give Africans garden seeds, not grain and jobs on monoculture plantations:

As more and more land turns to desert (6,950,245 hectares so far this year, on July 31, 2011; that's 26,824 square miles, and that's a mile wide band wrapping all the way around the Earth with plenty left over), Fukuoka's water-miserly method of planting polyculture seeds is increasingly appealing. He says:

"Chemical agriculture can't change the desert. Even if they have a tractor and a big irrigation system, they are not able to do it. ... To make the desert green requires natural farming. The method is very simple. You just need to sow seeds in the desert. ... You have to mix vegetables and trees; that's the fastest way for success."

Learn more about Fukuoaka on Wikipedia. 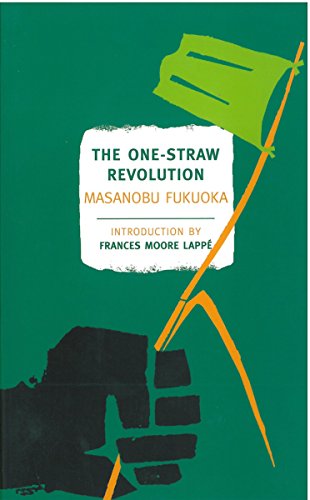 The One-Straw Revolution: An introduction to natural farming, by Masanobu Fukuoka

With a preface by Wendell Berry and an introduction by Frances Moore Lappe, you know this is going to be one of the most important books you will ever read.

In Amazon's editorial reviews, Michael Pollan, author of The Omnivore's Dilemma calls it "one of the founding documents of the alternative food movement, and indispensable to anyone hoping to understand the future of food and agriculture."

Look inside and see for yourself. The story behind the title is available there. Open the table of contents, scroll down to "One-Straw Revolution" and click through. You won't be sorry.

Green your own mini desert

Grow your own food in a tiny urban back yard. Or in your front yard. Or on your balcony. The film Urban Permaculture shows you how. Watch the trailer now.

While gardening is a key component, permaculture is about so much more. It is about developing a way of living in harmony with the Earth and with each other.

Where are you in this process? I know I have a long way to go. I'm open to suggestions and thoughts on speeding up the process in my life. Where are you?