Why I Voted For John McCain For US President

John McCain was the most qualified and best choice for US President in 2008. I voted for McCain in the 2000 and 2008 primaries and voted for him again in the general election.

Why? Mainly because he's the only candidate who rises above ideology and partisan bickering to get things done for the good of America. Read on for more reasons why John McCain was the best candidate for US President in 2008.

John McCain has proven that he is a leader throughout his military and political career.

As a Naval aviator, McCain flew 23 combat missions over Vietnam before he was shot down and captured as a POW. While a POW, McCain was given the choice to be released early but chose to stay because other American POWs had been held captive longer.

After 5 and a half years of captivity McCain was finally released and returned home. He recovered from his injuries and regained his flight status. Then he commanded one of the Navy's largest attack squadrons.

In Congress, McCain has fought hard to eliminate pork barrel spending. He's challenged Republicans and Democrats to work together in Congress and has led by example in doing so.

Over personal and party interest.

John McCain has a long track record of working with members of both major political parties in Congress to craft and pass legislation that is in the country's best interests. Some people call him a maverick for breaking party lines and following an independent streak...I call him a true American. He understands that he's working for the American people and that's the kind of politician we need more of in Washington.

John McCain Was Right On Iraq

Whether you agree or disagree with the decision to invade Iraq, the fact is we're there. McCain has said since the beginning that we didn't have enough troops there to get the job done right. It took way too long but President Bush finally realized this and sent more troops last year. The result has been a reduction in the level of violence and an opportunity for the necessary political changes to occur.

McCain had the best health care proposal of any 2008 presidential candidate. It provides a tax credit to purchase health insurance that would allow Americans to choose their own private health care plans or stick with their employer's plan. People work for several companies during their lifetime now and employer based health care plans are a thing of the past...the government just needs to catch up.

Unfortunately, Obama is proposing a government managed health care plan that would create another huge bureaucracy and cost taxpayers dearly.

John McCain Is Right On Torture

If anyone is qualified to speak out about torture, it's John McCain. He was tortured for over 5 years while a POW in Vietnam and has sharply criticized the Bush administration for its use of water boarding and other torture techniques.

McCain knows that we are stewards of the Earth and its resources. He will work to ensure that Americans have clean air and water and that we use our natural resources in a sensible manner. 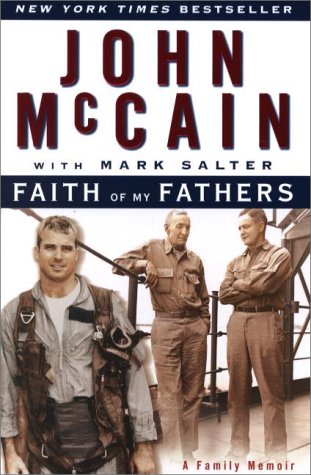 Faith of My Fathers : A Family Memoir
McCain has co-written several books. This memoir covers his life growing up in the footsteps of his father and grandfather, both US Navy admirals, through his time as a POW in Vietnam and how the faith they instilled in him guided McCain through five years of captivity.
Buy Now

What About The Competition?

Yes, there are still a few other candidates left in the race who think they would be a better President than McCain. They're wrong...but they are still running anyway.

In a poll conducted on this page before the 2008 Presidential election, nearly 70% of respondents indicated they planned to vote for John McCain.

You've read my reasons why John McCain should be elected President, what do you think of him? Please comment below...