When Will the World End

My major interests and career include piano tuning, aircraft piloting, and nature walking. My talented wife made the chain-linked armor.

How Will the World End

Have you noticed that natural and man made disasters are increasing? Besides Terrorism and crime, floods, fires, earthquakes and other disasters are happening with increasing frequency. It seems something is about to happen and it will. These disasters are like birth pains that increase in frequency and strength.

Most of us can see that these disasters are happening more often and that immorality is increasing. But they will get worse as the end nears. Below is a simple outline of what to expect in the near future.

1. Sunday Law in the United States. This is the first event that will signal the start of the end. Many of the Christians churches will join with the rest of the nation and push for a weekly day of rest on Sunday. The reasons for this day of rest will seem to be good for family and maybe even for national security.

Evil spirits pretending to be good angles or visiting dead loves ones will help push for this day of rest.

At first the law may seem mild but then became very forceful. The United States will push this law on other nations and force them to comply.

2. Gods people will give a final warning to the world. Voices from all over will be warning that it is wrong to force folks to worship on Sunday, which has no scriptural (Bible) support. Everyone will take sides. The line will be drawn between those who obey God and those who do not.

3. God’s people will suffer persecution. Those who disagree with this Sunday law will be seen as traitors to our nation. We will be told that the cause of all the rapidly increasing troubles in the world are from those who keep the 7th day holy.

False spiritual leaders will say that our world is being punished by "God" until everyone keeps Sunday holy.

God’s people have no trouble refraining from work on Sunday and obeying this man made law, but will still keep God’s true holy day which is the 7th day (Saturday) the true Sabbath. This will soon be unacceptable to authorities.

Folks who continue to keep the Sabbath (Saturday) holy will face stiff penalties, be thrown into prison and sometimes attacked by angry mobs who have been influenced by the media and false spiritual leaders. Laws will be made preventing buying or selling unless you go with the majority. It will be extremely political incorrect to disagree.

4. A terrible time of trouble leading to the death penalty. "At that time shall Michael stand up, the great Prince which standeth for the children of thy people: and there shall be a time of trouble, such as never was since there was a nation even to that same time: and at that time thy people shall be delivered, everyone that shall be found written in the book." Daniel 12:1.

Terrible times will be happening. Cities will be destroyed by man made and natural disasters. These troubles will be many times worse then they are today.

The authorities will tell us that those who insist on keeping the 7th Sabbath (Saturday) holy are the cause for these disasters.

Finally a death decree will go out for all those who keep God’s true Holy Sabbath. The date will be set for a certain time. God’s people who are not in prison will escape to remote places.

All the dead who are written in the book of life will be raised to life and we who are alive will be caught up with them in the air and forever be with Jesus.

“For the Lord Himself will descend from heaven with a shout, with the voice of an archangel, and with the trumpet of God. And the dead in Christ will rise first. then we who are alive and remain shall be caught up together with them in the clouds to meet the Lord in the air. And so shall we ever be with the Lord. (1 Thessalonians 4:16, 17)

The world will be shocked at this extraordinary event and when they realize that they are on the wrong side will start to war against each other. Plus many will destroyed by the brightness of Jesus coming.

And then the lawless one will be revealed, whom the Lord will consume with the breath of His mouth and destroy with the brightness of His coming. (2 Thessalonians 2:8)

Not one person will be left alive on the earth.

For a lot more details and what happens next read the book, The Great Controversy, by Ellen White.

Ellen White was a messenger of the Lord who was sent to all of God’s people. She died in 1915.

Paul Harvey, a famous radio broadcaster, occasionally quoted from her and said that people needed to get to know her. Her message on health is still ahead of our times today and continues to be proven right as doctors learn more about what we eat and how it effects our bodies. 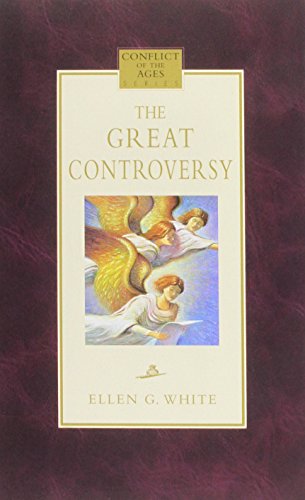 Great Controversy
I have read this book many times and the last chapters outline the end of the world really well. This book is written by a modern day prophet.
Buy Now