50 Ways to Leave Your Lover: How to Say Goodbye When It is Over

50 Ways to Leave Your Lover

Paul Simon wrote 50 Ways to Leave Your Lover in 1975 on his album Still Crazy After All These Years. In an interview published in Rock Lives: Profiles and Interviews, Paul called it a “nonsense song.”

Yet, the understated tune, the rhythmic beat, and the emotional lyrics turned it into a hit. The lyrics spoke to us because we have all experienced the pain of a romantic break-up.

The song begins, “’The problem is all inside your head,’ she said to me.” The “she” in this song is a mistress who is getting tired of the excuses her lover gives about why he can’t leave his wife. She’s saying that it is not that hard to do--just make a clean break.

Another interpretation is that a woman is telling her husband to get out, but he doesn’t want to leave. She’s pushing him out the door saying, ”Go, Go Go! Just go!”

Paul wrote this song shortly after his divorce from his first wife, Peggy Walker. Was he writing from experience?

Although the song promises us fifty ways to leave your lover, it only gives five ways. They are:

I will now pick up where Paul Simon left off and give the other 45 ways to leave your lover.

Let Paul Simon's song be your background music as you read on.

Here are a few more that continue with the name-rhyming theme that Paul Simon uses.

We could say something nice, but with a heavy dose of sarcasm.

We could try to be nice about it. But be warned, this will likely get you involved in a long messy discussion.

22. We’re just not right for each other.

Sometimes you just need to say it loud and clear.

Sometimes you may have to get a bit nasty. You gotta do what you gotta do. I’m not judging.

A little bit of vulgarity can help assure your soon-to-be ex knows that you really mean it.

35. Don’t let the door hit you, where the good Lord split you.

There is a certain jauntiness to using a slang expression as an exit line.

Something Victorian sounds more like a Valentine than a brush-off, but it gets the job done.

Sometimes an allusion can take the sting out of a good-bye.

45. Years from now, when you speak of this, and you will, be kind. The final line from a 1953 play by Robert Anderson. It was later made into a movie. The wife of a college instructor helps a young student by becoming his lover when the other boys accuse him of being a homosexual.

46. Cry me a river. A bluesy ballad written by Arthur Hamilton, first published in 1953 and made famous in a 1955 Julie London recording. In the song, a woman rebuffs a former lover who hurt her by rejecting her. She tells him “cry me a river because I cried a river over you.”

Establishments that serve adult beverages, commonly known as bars or taverns, will sometimes tell a patron who has had too much to drink or who is not behaving well, that he is 86’d. It means that he is being told to leave. Where did that term come from?

There are about a dozen different explanations for the term. The one I like best is that 86 is rhyming slang for “nix,” a word which means to refuse, to forbid, or to say “no” to.

However, many will swear that it goes back to the days of Prohibition. In New York City, there was a speakeasy called Chumley’s located at 86 Bedford Street. The main entrance was not on Bedford Street, but through a courtyard. When the police planned a raid, the cops who were on the take from the bar would phone and warn the bartender of the upcoming raid. The bartender would then shout out “86 everybody,” and everyone would leave through the door on Bedford Street because the police would be entering through the courtyard door.

The best exit lines ever

This is from the movie Casablanca. It’s a sentimental and loving parting.

Rick (played by Humphrey Bogart) is trying to persuade Ilsa (played by Ingrid Bergman) that she must leave Casablanca without him. It is during World War II, and he wants her to board a plane with Victor, her husband..

Rick says,“Inside of us, we both know you belong with Victor. You're part of his work, the thing that keeps him going. If that plane leaves the ground and you're not with him, you'll regret it. Maybe not today. Maybe not tomorrow, but soon and for the rest of your life.

“Where I'm going, you can't follow. What I've got to do, you can't be any part of. Ilsa, I'm no good at being noble, but it doesn't take much to see that the problems of three little people don't amount to a hill of beans in this crazy world. Someday you'll understand that.”

The second one is from the1939 movie “Gone with the Wind.” It’s an angry and brutal parting.

It takes place in Atlanta, Georgia, during the Civil War. Scarlett O’Hara (played by Vivian Leigh) has been manipulating Rhett Butler (played by Clark Gable) over the ten years of their tumultuous relationship. He’s finally decided to leave her. As he walks toward the door, Scarlett throws herself at him and begs him to stay. “Where shall I go? “What shall I do? He turns on his heels and utters his famous parting line.

I tried to make you laugh; here is the real scoop. 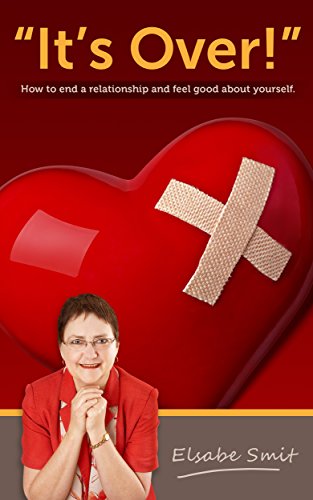 It's Over!: How To End A Relationship And Feel Good About Yourself

Sensible, practical, and compelling device about how to end a relationship and get on with your life.

Bonus: Say it in a foreign language.

Things just don’t sound as bad when you say it in a foreign language. You need to be careful with this because sometimes you may think you are saying goodbye, but you are really only saying “until we meet again.” Also, sometimes the word for “goodbye” is the same as the word for "hello." Just be sure your tone of voice leaves no doubt that you mean “goodbye.”

How to Say Goodbye in 12 Different Languages

One thing you should never say.

One thing you should never say is “I want to see other people.” Really? Unless the person saying this is bi-sexual or bi-curious, the person probably has a specific gender in mind. “People” is a cop-out. Just come out and say it-- you want to replace your lover.

Take this poll just for fun?

Have you ever used any of the above ways to leave a lover?

I welcome your comments. Do you have any ways to leave your lover to add?