A Complete Guide to Wedding Chapels in Las Vegas

Las Vegas, Nevada has long been considered synonymous with getting hitched quick, fast and in a hurry. The high rate of marriages in the city are usually attributed to practical factors like no blood tests, low marriage license fees and no waiting period. In fact, Las Vegas averages a marriage ceremony every five minutes. It has also been estimated that one out of every 20 American marriages occurs in “Sin City.” Many celebrities like Jon Bon Jovi, Aaron Neville and Billy Ray Cyrus to name just a few, have chosen Las Vegas as their wedding locale. With so many couples coming to the city to tie the knot, there are plenty of wedding chapels offering everything from drive-thru nuptials to the full blown theatrical productions.

Little Church of the West

This charming little wooden chapel is a popular spot for couples to renew their vows. It was built way back in 1942, and made an appearance in the movie “Viva Las Vegas.” Little Church of the West is located at 4617 Las Vegas Boulevard South, phone: 800-821-2452.

This is the place to go for a themed-out wedding. They offer everything from Elvis’ Blue Hawaii to pirate themed weddings complete with all of the special effects. Check out Viva Las Vegas Weddings at 231 Las Vegas Boulevard South, phone: 800-574-4450.

Maverick Helicopters offers a unique Vegas wedding package that includes a flight to the Grand Canyon, followed up by champagne and a wedding cake upon return to Las Vegas. Contact them at 6075 Las Vegas Boulevard South, phone: 888-261-4414.

Wee Kirk o’ the Heather has been marrying folks since 1940, making it the oldest operating wedding chapel in Las Vegas. It is also the closest in proximity to the county’s marriage bureau. They are situated at 231 Las Vegas Boulevard South, phone: 800-843-5266.

If one has the money, nearly any kind of wedding imaginable can be realized in Las Vegas. Trekkies can proclaim their love for each other at Star Trek: The Experience. True romantics can recite their vows while cruising in a gondola at the Venetian Resort Hotel. Lovers can even declare their undying affection for one another above the clouds at the Stratosphere Hotel and Casino. The possibilities are limitless in this city where anything can be had for a price 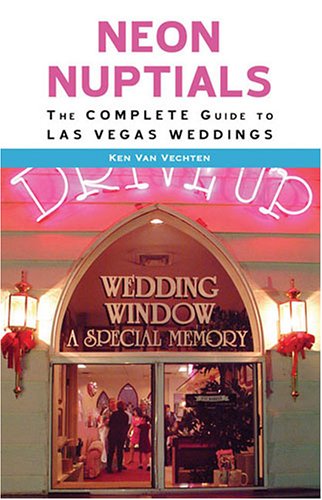 Despite all of the hype, don’t expect a Las Vegas wedding to be the happiest day of your life. Most of the wedding chapels are merely cheap impressions where everything from the flowers to the stained glass church windows is fake and rather tacky. Ceremonies are often rushed in an attempt to get as many marriages done a day as possible. But, if the only concern is making it official, Las Vegas can get it done.