Ethel Clarke and Edward Beane, Newlywed Couple on the Titanic

At The Time, They Would Have Been Called, "Mr. and Mrs. Edward Beane"

But, we don't do it that way anymore.

A few years ago, there was an exhibit at the Milwaukee Public Museum, about the Titanic. My daughter and granddaughter went there.

When they got back, they showed me some 3' x 5' cards they had from the exhibit.

Visitors to the exhibit would pick these cards at the beginning. The cards would have a name or names of Titanic passengers, along with a little bit of information about the passenger.

At the end of the exhibit, you would find out whether or not "your" passenger --- i.e., the person whose name appeared on your card --- had survived.

Fortunately, the passengers on both cards had survived.

So, I asked my daughter and granddaughter if I could have those cards. I wanted to find out more about these survivors. I figured this might be a good opportunity for me to practice my genealogical research skills.

A Couple of Hours of Research Later . . .

I did find information about Ethel and Edward by researching primary source documents.

I used the U.S. Census and whatever I could find online at the local library: --- some old newspapers also. I was about to start writing a Hub about what I had found.

Then, later, --- I think on a regular Internet search --- I realized that there was already much secondary and tertiary material online about Ethel and Edward's story of surviving the Titanic disaster. So, I chucked all my primary source material --- which wasn't quite as interesting.

All I'd really found out about them was that they had two sons, and lived in Rochester. Edward died in 1948, and Ethel in the 80's, I think. Edward died pretty young. He must have only been in his fifties.

Front of the Ticket from Milwaukee Public Museum

Ethel and Edward traveled Second Class from Southampton to New York. Ethel was 21. She lived in Norwich, England.

The card says, under Reason: "After waiting several years for his return from America, Ethel finally married her sweetheart, Edward Beane, in March of 1912 after he had secured work in New York City as a bricklayer. The newlyweds chose Titanic as the Ship to carry them to their new life together.

Under "Passenger Fact: The Beanes were one of more than twenty newlywed couples aboard Titanic."

Back of the Ticket

What Happened to the Other Newlyweds?

The card, above, says, "The Beanes were one of more than twenty newlywed couples aboard Titanic."

Ethel and Edward were the only newlywed couple who survived together.

But, some of the other articles I link to in this Hub have said there were about a dozen newlywed couples.

The Beanes did not leave the Titanic together. The crew was threatening to shoot men who tried to get space on a lifeboat, but Edward jumped off the Titanic and swam around for a few hours.

Some versions say that Ethel was already in Lifeboat 13 (lucky for her), but she pulled him in when she saw him swimming.

Other versions say that neither knew the other had survived until they met on the Carpathia.

Rochester Democrat Article From 1931 Reprinted on the Encyclopedia Titanica Website

The Arrival of S.S.Carpathia after the Disaster (The Picture is Small -- It Got Too Pixely when I Enlarged It.)

Ethel and Edward ultimately arrived in New York on the Carpathia.

For several days, nobody in the U.S. --- not even the president ---- knew where the survivors of the Titanic were. Guglielmo Marconi had to testify before Congress.

It turned out that wealthy folks had been jamming the telegraph machines with reports back to their own families and friends. The telegraph operators took the cash payments from these wealthy folks and everyone else was just out of luck.

The Story of the Titanic as Told by Its Survivors

The Story of the Titanic As Told by Its Survivors (Dover Maritime)
This is a Dover publication, made in the U.S.A. It's a compilation of four books that were published shortly after, all of which are now out of print, except in this volume. There are many other books about the Titanic on Amazon, but this one had an average of 4.5 stars, with twenty five reviews. 352 pages, 26 illustrations. Dover is a great company. Check out its website at doverpublications dot com. Or click my link, below, which will take you there directly.
Buy Now 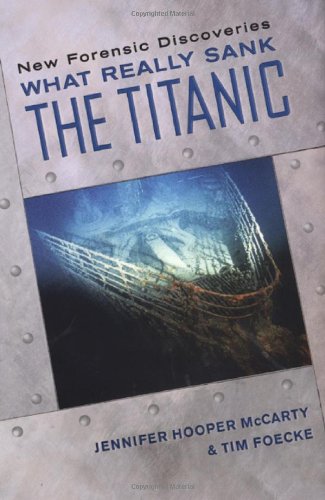 What Really Sank the Titanic: New Forensic Discoveries
This is the book described and reviewed in the New York Time article, left, "Rivets -- The Titanic's Weak Link."
Buy Now