The following two questions were asked to online community here:

1) Are sociopaths born with sociopathic behavior or are created?

2) How should a man recognize that he has fallen in love with a lady who is a sociopath? How does he get out of this Sociopathic love?

The first question generated very many answers compared to the second question. To me, this meant that people dread falling in love with sociopathic lovers and its better such issues are left untouched. Many people felt sociopathic behaviour is learnt when one is a child especially up to the age of 15 years old. Children whose parents and guardians have this behaviour are very likely to be sociopaths. Others felt that Sociopath Traits are genetically related – if a mad man can give birth to a mad child, then it follows a sociopath can also give birth to a sociopath.

The person next door may be a sociopath. It is that common. For a man to fall in love with a sociopathic lady is fairly easy. Ideally, the sociopathic lady will be highly intelligent, creative, and will appear polite. The first thing she will do is to identify and calculate if you are an appropriate man that is easy to manipulate and control. Once satisfied you are the right guy, the next thing is to establish a love relationship with you as fast as it is possible. Female sociopaths are more assertive in expressing themselves than should normally be – the body language will be loud and clear for you to notice. When she wants you, she will just keep on standing closer and closer to you, and sooner she’ll feign and exaggerate her look into your eyes as she exchanges glances with you. This will be accompanied by beautiful smiles that most men are unable to resist. Sooner you will be in love with her.  Now what remains is for her to charm you and you will be singing to her own tunes.

Most men pride themselves that they can’t shy and look down when a lady look at them straight into their eyes. These men are the easiest catch. Naturally, when you look at that other person straight into the eyes, and he looks straight into your eyes, and you keep on getting closer to him, you both develop strong intimacy for each other that will result perhaps in a kiss. This explains why when we stand very close to strangers in a lift/elevator; we tend to look down because if we did look straight into the eyes of the person next to you, and they did the same, at that closeness, this would result in intimacy which was not in our intension. Any lady who stands closer and closer to a guy, and who looks at him straight into the eyes stands a better chance of getting that guy. If she can’t get the first guy, she will move on to another guy. If this lady can get one guy out of every ten guys, that is alright and she will concentrate on that one catch for a relationship.

She Will Dominate and Humiliate You

Once in the relationship, the next thing you will realize is that the person you fell in love with hardily recognizes your rights but will merely take you as an instrument to be used. She will dominate and humiliate you and there is nothing you will do because the girl will be very charming. A relationship is an equal exchange between partners but here you have someone who will consistently lie to you with no remorse, shame or guilt and still manages to charm you to continue staying in the same relationship with you.

As soon as the love relationship starts, this sociopath will immediately start her parasitic lifestyle and the greatest danger is that she will manipulate and control you without realizing you are being exploited. She may be interested in getting free money from you because deep inside her she believes she is entitled to your money. It’s kleptoparasitism by humans. The Common Cuckoo birds are good at it. The cuckoo believes it has a right to lay its eggs in the nest of other birds to brood them on its behalf. This relieves cuckoo the hassle of investing in rearing of chick and building nests, enabling the cuckoo to spend more time foraging and producing offspring.

Let’s look at the case of Smith and Ann who are in love. Ann is a sociopath and believes she can tell lies to Smith in order to get some money. Ann realizes that each day they communicate with Smith in more than 20 sms and perhaps ten telephone calls. One day Ann decides to lie to Smith that her phone is no longer receiving text messages and she needs to take it for repair that will cost $50 which she doesn’t have. Smith, being a man, is expected to fill the missing link and provide $50 to Ann so that the phone can be repaired, otherwise, smith will not be able to communicate with Ann using text messaging. So, Smith provides the $50.

Two days latter, the phone that was repaired has fallen down and the ear piece has been damaged. This means no voice calls to her if Smith would wish to communicate to her. To correct the problem, the phone needs to be taken for repair again and has been charged $60 which she doesn’t have. She figure it out that Smith should be a gentleman enough to decode that message and provide the cash needed so that the phone can be repaired and therefore be able to make calls to her lover. Smith being humane and considerate as normal people, he will provide the $60 needed. The next day, and without shame or remorse, she says her tooth is aching and she needed $100 to see a dentist, otherwise, she will not be able to talk to Smith because the tooth is very painful.

Lots of Hostility and Domineering

Any attempt by Smith to resist will be met with a lot of hostility and domineering. Even Smith trying to buy her a new phone will not be acceptable as she has grown used to her phone and only repair can do. It’s a polite way of telling Smith that its cash money she wants. It can be a phone, a car, mortgage payment, or whatever. The lies illustrated here may sound cheap lies but the sociopath is extremely convincing and will always pass most of the lie detectors that you may put in place, and if she didn’t, she never feels remorseful, shameful or guilty, and if the worse come to worse, she may try to harm you, anyway.

Getting Out of Sociopathic Love

To get out of sociopathic love may sound easy to those who have not been there. They will tell you to dump her as she is worthless and a menace. But this is one person who is highly intelligent, creative and polite, and when you are seeing point A, she is past point A and she is seeing point B. The biggest difficult in leaving such a person comes from the fact that you are humane and you for your part are genuinely in love with her. You may want to leave her but it’s impossible to fall out of love immediately and before you do so she will find a new place to touch you to stop thinking about living her. The first thing you have to do is to ask yourself what it is that this lady gives you that are so interesting. In this case it will be love and s*x. These are the two items that you will slowly train yourself to do without.

Simply Pack and Leave Without Word

The question is asked: Do you consider it manly for a husband to simply pack and leave his wife, without word after finding their marriage relationship isn’t getting any better from his sharp-tongued wife, never to come back again? The hubber moncrieff says this,” Men usually do not like soap opera farewells and high dramatic scenes of bitter accusations. Instead, men will leave. It's not like they fear something or they are afraid of facing the problem. They know the problem is there and it cannot be fixed. Plus there's a bit of mystery and unsaid words left... Something left for the future.” I think if you find yourself in love with a sociopathic lady, the best solution would be to borrow moncrieff reasoning, if you can.

Here below is a listing of some of the most common symptoms, features and behaviors of sociopaths

The biggest problem of female sociopath on a man is that a man is most likely to ignore what his gut instinct is trying to tell him about the woman, because he blindly thinks she wants him. 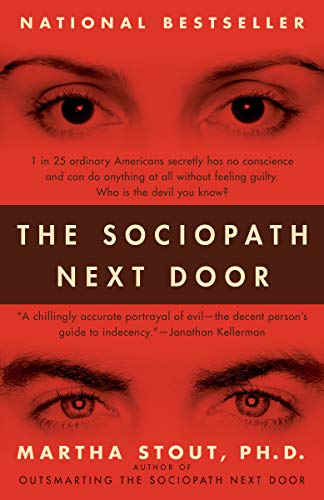