The History of Wedding Rings

In modern times, wedding rings are seen as signs of everlasting love and a personal commitment. Rings are used throughout different cultures around the world, and the practice of exchanging rings along with wedding vows can be traced back through thousands of years of history. The history of wedding rings is incredibly interesting at points, particularly when looking at the symbolism of rings. Marriage dates back to our earliest ancestors and wedding rings can be traced back to cultures much older than most would assume.

Origins and History of Wedding Rings

What Does a Wedding Ring Symbolize?

Most associate wedding rings with commitment, which is not far off of the original usage of these rings. The oldest known wedding rings existed in ancient Egypt around 3000 BC. Rings were made from plant materials, making them readily available to any two people that would be sharing a lifelong bond. For ancient Egyptians, the circle was a representation of eternity, a symbol that has stayed true for millennia. The simple shape has no beginning and no end, no hard edges, and is smooth and pure. Interestingly, the rings themselves would only last a few months or up to a year at the most, and would then be replaced. It’s also interesting to note that the use of gold and other metals in rings today mean that they don’t just symbolize eternity, but they can last an eternity as well.

In 30 BC, almost 3000 years after the beginning of the history of wedding rings in Egypt, the Romans conquered much of the areas around the northern coastline of Africa. The Romans liked the idea of wedding rings so much that they were absorbed into western culture. The continued use of wedding rings is just one example of how the vast expansion of the Roman Empire continues to influence the world today.

It was the Romans who took the concept of rings and linked them to the concept of marriage that we are most familiar with today. As time advanced, the Romans and Greeks began to use precious metals like gold and even developed ornate signet rings that were unique to the wearers. Some ancient roman rings even included names and carvings of the couples.

The practice spread throughout the empire and even outside of Rome’s main sphere of influence. In Ireland, Claddagh rings have been used for hundreds of years. Similar to early Roman concepts, these rings feature carved hands that meet together in the middle of the ring. Sometimes a Claddagh ring also features a heart with the two hands meeting either side of the heart. The symbology of the Irish rings would not be lost on anyone; the heart represents love, while the two hands coming to meet are representations of both parties in the marriage.

Throughout the history of wedding rings, it can be seen that some of the earlier styles were much more flamboyant than what we are used to today. One of the reasons for this could be that society now favors practicality over unnecessary detail. It is also important to note that people who were able to afford gold rings in earlier centuries would have come from wealthy families in the privileged classes and would not work with their hands if they even worked at all. A display of wealth would be more important than practicality.

Wedding ring styles today have changed significantly to what existed in the past, but there are some commonalities that can be found with the wedding rings from the 16th, 17th, and even 18th centuries. Rings are often made of gold, as they have been since the first millennium AD. Most rings still feature stones and inscriptions, just like the rings used in Europe during the Renaissance period. Some rings like the Claddagh ring are still popular today, and the design has not changed significantly since the very first ones become popular hundreds of years ago. 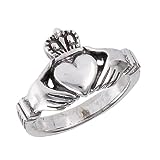 How Style Has Changed over the Last 100+ Years

The Most Popular Wedding Ring Styles

The styles available today are typically more subdued than popular styles of the past, however, that doesn’t mean that there isn’t beauty to be found in a modern wedding ring. Manufacturing methods have advanced tremendously, which allows for intricate detail, precision cut diamonds and gemstones, and there are more materials available besides yellow gold.

White gold can be used for wedding rings, platinum is popular but slightly more expensive, and some modern rings are even made from materials like tungsten or carbon fiber. There are no rules to what is used, and some couples even design wedding rings from exotic wood that has been crafted and treated to last for many years to come. The tradition of the wedding ring is perhaps stronger than it has ever been in the past, and the meaning
still remains the same: love, devotion, and a lifelong commitment. Speaking of lifelong commitment, you'll find more and more people getting tattooed wedding rings. What says commitment more than a ring that costs several hundred dollars to remove?

What Hand Does the Wedding Ring Go On?

The traditional place to wear a wedding ring is on the left hand and on the third finger, otherwise known as the wedding ring finger. This tradition dates all the way back to the very first Egyptian rings made of grass andreedfibers. The Egyptians chose this finger because they believed the heart to be the source of love and other emotions, and they believed that a vein in the wedding ring finger was linked directly to the heart. Today we know that all veins are parts of a single system, but the symbolism still has some romance behind it, and it was widely adopted by Romans and spread throughout the world.

Should Wedding Rings Feature Diamonds or Other Gemstones?

In addition to questions like "What hand does the wedding ring go on?", and "Which is the wedding ring finger?", modern couples may also be curious regarding the use of diamonds or other gems in rings. Wedding rings in the modern day are typically plain in appearance, with most people in western societies choosing simple bands without precious gemstones. Anybody looking for something with more sparkle and shine can definitely choose a wedding ring with an embedded diamond or another gemstone. Some even have rings custom designed with clusters of smaller diamonds or other stones.

There is some historical significance to the use of precious gems in wedding rings. Diamonds became popular in the 19th century and there are rings dating back to that time which featured small rose cut diamonds. There are even examples of diamond rings that date back to the 16th century. These earlier examples are quite different in style to what we see today, featuring cuts that were much simpler and easier to perform with the methods that were available at the time.

Practicality should always be considered before choosing a design. Diamonds and other gemstones can make a wedding band more fragile and less suitable for everyday use. Heavily adorned rings would also need regular maintenance and cleaning. Deciding on whether or not a wedding ring features diamonds or other gems, is a deeply personal decision. If a diamond or other embellished ring suits a particular lifestyle, then there’s no reason not to have one.

Wearing a Wedding Ring is Like Wearing History Itself

For 5000 years, the history of wedding rings has followed a story that transcends cultures and geographical boundaries. Starting with the Ancient Egyptians, the tradition has spread globally and slowly evolved over time. While modern rings are vastly different to those very early rings made of reeds and grass, the sentiment is still very much the same. As a gesture of love and commitment, there’s simply nothing that comes close to the exchange of rings at a wedding ceremony.