Is he "Passive Aggressive" or practicing "Anger Management"?

In search of peace of mind...

Upon graduating from high school a lot of young men are given a graduation card containing the poem “If” by Rudyard Kippling. I’m paraphrasing here but I wanted to point out the first sentence and the last.

“If you can keep your head when all about you are losing theirs and blaming it on you…..You’ll be a man my son!”

Men are taught it’s the calm person who is in control of a situation. We admire those who don’t freak out under pressure.

Over the past couple of weeks I have come across questions and articles from women concerning anger over their men being “passive aggressive” or “shutting down” during arguments.

One such article accused the man of being a (diabolical manipulator) because he kept a calm demeanor while she blew her lid. In fact the calmer he was the angrier she got. Some therapists have coined this behavior as being “The Seesaw Effect”.

When her husband asked, “Why are you so upset? She went ballistic! After some time passed she began to question if she was justified in getting so upset and wondered if there was something wrong with her. According to the article the woman saw a therapist and learned her husband was “passive aggressive”. They have since divorced.

Essentially what we are talking about are the methods used by people to get what they want. The aggressive person gets in your face, tells you what they are thinking, and what they want to see happen. More often than not aggressive people are “proactive” when it comes to going after what they want. Passive aggressive people are usually “reactive” and non-confrontational. When pushed instead of pushing back they move out of the way or seek a way deflect an attack. They look for ways to get what they want without having to reveal their motives or ruffling feathers. In all honesty every one of us has been both aggressive and passive aggressive at times. It all depends on who we are dealing with and who has the most power in the relationship. The less power one feels they have the more likely they are to be covert or passive aggressive. Neither method is good or bad. A person judges his or her own methods by their effectiveness.

Women are likely to feel more comfortable with yelling, arguing, and crying as part of the process of resolving issues. Aside from some men that enjoy seeing their women wig out….the vast majority of men would rather not deal with that kind of drama. In fact most men see “in your face” arguing as foreplay before a (fist fight) breaks out. If it were a man in his face instead of a woman he’d probably knock the crap out of him. Most people don’t like being yelled at, bossed around, or talked down to.

Verbal Spankings and Shutting Down

All the while a woman is giving her man an ear full he is trying his best not to put his hands around her throat or punch her lights out. He sees they aren’t going to ever agree on the issue so he chooses to withdraw by tuning her out and if need be physically removing himself from the room. This further incites some women so they follow him room to room or corner him. Depending on the man this could be a very dangerous tactic. Men shut down to avoid displaying violent anger. In their mind they are practicing “anger management”. They initially try to use logical reasoning to calm things down. When that doesn’t work they tune her out. And if that does not work they leave the room. The majority of women in these circumstances believe they are “right” and it's their men that need to change. We are who we are.

What is a woman to do?

1. Be grateful you are with a man who does not believe in hitting women.

2. Learn from previous arguments and fights you have had with your mate.

After a while you should know if you do (a) then he is likely to respond with (b).

3. Remember the only person you can “change” is yourself. The vast majority of our fights are tied to the frustration we have over our mate not doing what we want them to do. People change when they want to change. All you can do is ask for what you want. Don’t assume communication will lead to action.

If he can’t or won’t give you what you want then you have to decide if it is a “deal breaker”.

If it is, get out. If it’s not, learn to leave without. It’s a waste of time trying to change water into wine. In order to have a happy relationship both people have to want the same things most of the time.

4. Try being “the man”. If you are very upset get out and go for a run or to the gym, take a walk, or do whatever until you calm down and can have a rational discussion. Once you start yelling he stops listening.

5. Keep the goal in mind when making your case. Avoid rhetorical questions such as “Why did you…?” If you have already made up your mind there is nothing he could say that would satisfy you. There is no point in jumping through those hoops. The only thing it does is put him on the defensive. You are not going to get what you want when the other person feels the need to hold their ground or justify their behavior. Ideally every argument or disagreement should teach us something about our mates and ourselves. Realistically you are not going to agree on everything. Therefore it’s important to pick your battles carefully. Fighting in a relationship is not about winning or losing. It’s about establishing boundaries in the relationship. If your mate loves you he or she will try to avoid hurting you.

“Anger is the mask that hurt wears…..”

Understanding our differences is key.... 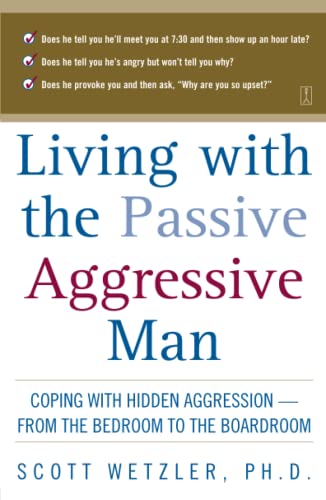 Living with the Passive-Aggressive Man: Coping with Hidden Aggression - From the Bedroom to the Boardroom
Buy Now