Our Names, Pet Names and Nicknames

"What's in a name? That which we call a rose
By any other name would smell as sweet."

But would it? Names of things, and more importantly, names of people have special meanings for us.

In the Bible Isaiah wrote that God said “I have called you by your name” (43.1), and from that we infer that even God knows our names.

Apart from our family name or surname, we have 'given' names or 'Christian' names, and these are often carefully chosen by prospective parents, so that the baby is given a name, or names, that have special meaning or he or she may be named as a namesake.

It doesn't stop there, though. Almost as soon as the baby is born and named, that name is likely to be shortened or he will acquire a pet name, or even a nickname.

Alexander: Greek. Defender of the people.

Henry: German. Ruler of the home.

Mary: Hebrew. Of the sea/ Bitter.

Meanings and Origins of Names

Names are often chosen because of their meanings or the country where they originated and that makes them special for those who have chosen them and for those who receive those names. Meanings are important, especially to the person receiving that name.

As my father's surname, was a common one in the country of his ancestry, Wales, my parents decided to choose unusual Welsh names for their children. Mother chose 'Bronwen,' without checking the meaning. Later when I asked the meaning she looked it up and told me it meant 'white blossom.' When I changed schools in Year 9 and was being introduced to the class, a teacher asked what my name meant. Blushing a bright red, I told her. For ever afterwards, I was nicknamed, 'Blossom.' However, later in my teens I looked it up and found that my mother had added a couple of letters to the word: it actually meant 'white bosom!' I was really glad I hadn't known that one before, but I also found that there had been a Queen Bronwen of Wales, so that was slightly mitigating.

There are books of names available in libraries and there are numerous sites on the internet where names and their meanings can be found.

While some people and some families prefer the full given name, shortened forms of names, or diminutives, seem to have always been popular. Diminutions are often terms of endearment and especially feminine ones are acceptable between friends and family members but can seem derogatory when used by acquaintances or strangers. We children thought it was hilarious when we heard our Grandmother Letitia being called Tish by her sisters, although we valued our skins and kept our amusement to ourselves!

Some examples, using the names listed above are:

A baby is often given the name of a relative, an ancestor, a much admired famous person, or a friend, so becoming their namesake. The word comes from the phrase, 'for the name's sake.'

My Father-in-law was injured in World War I, and it was deemed too difficult to remove the many bits of shrapnel, so they were left there for a number of years. Later, when he was working on his orchard, his leg became infected and gangrenous and he had to be rushed to a hospital several hours away by ambulance. The leg was amputated and his life hung in the balance, but he recovered. He was so grateful to the surgeon who saved his life that he named a son after him.

The lovely Papuan lass pictured below is my namesake and I consider that a great honour.

Pet names are terms of endearment, and some of these are dear, darling, sweetie and sweetheart. There is the story of the visitor who remarked to his elderly friend:

"It's so lovely that at our age you still call your wife, Darling."

"Oh," replied his host, "I forgot her name years ago!"

Some pet names are specific to age or to a country or culture. I have heard a French man call his wife, "Ma petite choux," - 'my little cabbage,' while in Australia we often use the term, possum, meaning someone who is cuddly. 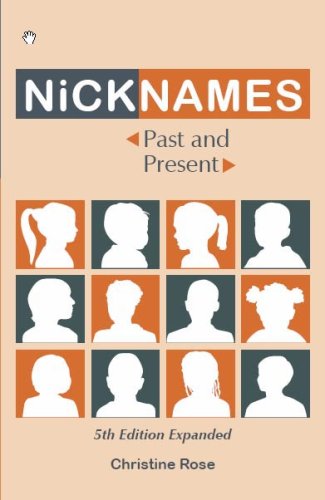 Nicknames: Past and Present
Buy Now

A nickname is often an amusing name for a person, perhaps related to a trait or an occurrence. When we were at school, one girl who owned a pony was mad on horses and never seemed to talk about much else, so she was nicknamed 'Neddy,' while another was always in a hurry, so she was known as 'Speedy.'

In World War I, some of the others in his group discovered that my Dad's second name was Henry, a name he did not like and tried to hide. His mates shortened that to 'Hen' and quite soon his nickname became 'Chook,' which he did not mind at all.

In times past, nicknames were not always kind. Boys who were overweight were often nicknamed 'Fatty' or 'Fatso.' A girl we knew was always slow and earned the nickname of 'Snail.' I have not heard such nicknames recently, so perhaps we are improving in our attitudes towards each other.