The Battle for the Definition of Marriage

Western democracies struggle with the concept of same-sex marriage

A culture war is being waged in the USA over the concept of marriage. All indicators are that the Conservatives are going to lose out when the younger generation begins to engage in the political process (they are far less homophobic than their elders). Therefore that battle has been taken to developing countries where religious and cultural objections provide fertile ground for the traditional definition marriage.

The subject is very sensitive because it touches morality, a deeply personal concept. Same-sex marriage is sometimes viewed as a direct attack on the established religions including Christianity, Judaism and Islam. The proponents of same-sex marriage argue that it is a human rights issue. A number of theories have been espoused concerning sexuality ranging from the scientific to the emotional.

The overlap between civil rights and cultural norms

To date no one has provided a satisfactory explanation as to why people are heterosexual, homosexual or even bisexual. Christians point to guidance from the Bible to denounce this ‘abomination’ while Islam has a similarly Conservative view. African traditional culture believes that marriage is primarily to raise children and foster community relationships. This may not be possible in a same-sex relationship.

Others are worried about the slippery end of a slope: Where will it end? Will the government start recognizing marriage between animals and human beings? What about polygamy? What about pedophilia? Even the most liberal traditions tread carefully when the subject is couched in such terms. At the heart of the disagreements is the distinction between an acquired and a natural phenomenon.

For some people anything other than heterosexuality is a learned behavior which can be corrupted by lasciviousness. [1]Others claim that homosexuality is a form of sickness which can be treated using medical and psychological methodology. On the other hand there are some who consider sexual ‘aberrations’ to be some sort of demonic visitation which can be healed through spiritual methods.

The Liberal Establishment may be playing a dangerous game by insisting that homosexuality has to be accepted or else there will be consequences. Attitudes are likely to harden if for example African countries are denied foreign aid because they take a Conservative approach to this issue. Persuasion or accommodation might be a bitter pill to swallow but at the end of the day radical changes in the understanding of traditional marriages are likely to trigger a backlash.

President Obama was pushed into a corner and eventually decided to fall on the Liberal interpretation of marriage. Apparently his interaction with his daughters Sasha and Malia helped to convince him that the restrictions on same-sex marriages were unfair. Already it is clear that the younger generation is going to determine the winner in this culture war.

Civil Unions were meant to quell the equality campaigners by offering a marriage in all but name. However matters have since moved forward. Gay people are demanding that they be given the right to marry in same-sex relationships. For some people this is deeply offensive to their religious beliefs. Marriage appears to attract more civil benefits when compared to a Civil Union. Already the seeds of discontent have been sown.

The role of religious institutions

If there is an acceptance that marriage is in fact a religious ceremony without civil consequences then religious organizations would be logically entitled to define it. However the reality is that marriage in the USA and other countries attracts significant benefits which are administered by the government. For example married couples may be entitled to certain benefits.

The supporters of same-sex marriage argue that sexual minorities pay their taxes just like everyone else. Therefore they are entitled to demand benefits that are similar to heterosexual couples. It is a complex issue that may not be resolved by a simple electoral process. Most attempts to get the public to support same-sex marriage at the ballot box have failed in the USA.

Some Churches are taking the bull by the horns. For example Rev. Jane Adams Spahr risked the wrath of the Presbyterian Church establishment by marrying 16 same-sex couples. [2] An attempt to rebuke her was voted down by the Presbytery of the Redwoods. Although religious institutions are naturally Conservative on this issue, their opinions are by no means homogenous.

What will be the definition of marriage in 50 years time?

It is hard to judge the pace of change but it is certainly true that younger people in developed countries are more likely to take a ‘live and let live’ approach to sexuality. They also question the ethics of those institutions which insist on traditional marriage. For example the issue of child abuse in the Catholic Church has rendered some of the arguments against homosexuality rather hypocritical.

Both sides of the argument are happy to attack anyone that takes a contrary approach. Meanwhile the world is changing. It is almost hard to describe the Spanish Inquisition to the young Europeans of today yet a few hundred years ago a person could be burnt for refusing to accept a certain religion. Perhaps in 50 years time, all these arguments will be completely irrelevant.

Should Gay People be Allowed to Get Married? 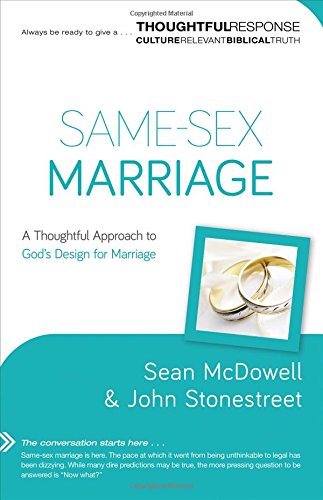 Did you find this article useful?