The Most Embarrassing Day of My Life!

Farrah has been a blog publisher for over 10 years and has some blog traffic and site optimization tips for you.

My Most Embarrassing Day

I saw a post a little while back on a website about a lady's most embarrassing day where she peed on herself in a bus and it got me thinking of mine.

I know everyone has that one moment they'd rather not remember, but some just make you cringe in a fresh wave of shame when you remember them.

Mine happened in 2011, but it seems just like yesterday. I'd just got a new job and was pretty excited about it. After a week or two,I formed this clique with these three other ladies. One of us was married (Vivian) , one engaged (Voke) , and the two of us left (Nonso and myself) were very single.

Two weeks into our training, we realized the job was was all hype and nothing close to what we'd been made to believe: the working conditions were slave-like, the pay, horrible and it had no benefits to speak of. Needless to say, we all started looking for alternatives.

Voke's fiance would her job openings whig she would forward to all of us. On this very day, a few openings were sent as usual, but being she was busy, she gave the phone to each of us to forward ourselves. It got to my turn and I did, handing the phone right back to her when I was done.

As I stood there, all I could think of at that moment was that it would be a way better fate to disappear; I literarily wanted the ground to open up and swallow me. 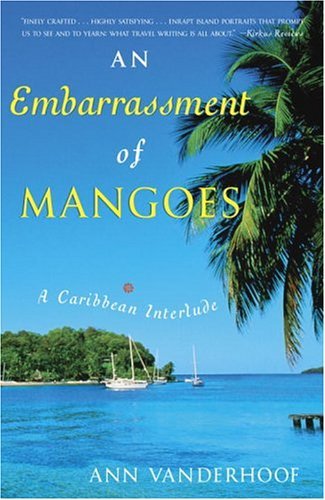 An Embarrassment of Mangoes: A Caribbean Interlude
Buy Now

Few minutes later, Voke called me asking if a particular bbm pin was mine (BBM was the in-thing then). I checked and confirmed it was.

Why was she asking?

Then she dropped the bombshell
Her fiance sent it to her asking who it belonged to.

Huh? He what? How did he get my pin? These were the confused thoughts running through my head.

Then she replied someone sent it to him a little while back.

At this point I felt I was watching a scene from a prank show and she would laugh and confirm it was all a joke.

We all went silent. If a pin had dropped at that moment it would have been deafening.

I played the scenario in my head:

I'd used to phone last, only for le boo to message that someone sent him a pin.

I looked at their faces and saw clearly what they were thinking.

I defended myself, but I could see the stark disbelief written on the faces before me.

I felt embarrassed. Humiliated even. It seemed like I was trying to snatch Voke's fiance and nothing I said convinced anyone. The more I tried to explain, the guiltier and defensive I looked. In the end I kept quiet and bore the very uncomfortable silence that went on for a while.

I tried to live down this embarrassment and continue my friendship with these ladies, but things never remained the same. While we all remained friends on the surface, things changed drastically, chief of which tipics relating to relationships were reduced or stopped abruptly when I came into the room.

One time, Vivian even refused me staying over at her place we closed late and were still out by 1am.

Although that was the reason she gave, we both knee the real reason she did that. Can't say I blame her though. I probably would do the same in her shoes. I understood, but it didn't stop me from feeling embarrassed.

Help for Social Anxiety and Phobia

My vindication came several months after I left that company as I got a new job and while I still had the other ladies on my bbm contact, I never really reached out to any of them. I would get a message or two from Voke every now and then, though. She seemed to be he only one whose attitude towards me didn't change. I never understood why until I got a bbm message from her a few months back.

On checking I realized all the message contained were three pins. And the best part? Turned out one of the pins belonged to her fiance.

When I expressed my confusion and asked why she'd sent the pins, she went on to explain she didn't. Her phone had the habit of sending random pins to contacts on her messenger list once it was being operated.

She said she was still trying to get used to the phone and couldn't explain why it did that nor had she been able to stop correct that malfunction.

I was livid! She knew the phone had that issue but kept quiet the other day. I felt angry, hurt even, that she hadn't thought it necessary to let the gang know the phone had that fault. She let them believe I was trying to make a move on her man and caused me untold embarrassment.

In the end, turned out she alone knew I was innocent of that act.

Afterwards, I screen grabbed the conversation and quickly sent to the other ladies, desperate to make them know the truth. However, the response I got was far from what I expected and craved; it was lukewarm at best with one of the ladies typing a simple:

This taught me a valuable lesson in life: a reputation once tarnished, can never be unsoiled.

I was far too soiled in these ladies' minds to be redeemed.

I see the others from time to time and till date, I still feel a slight embarrassment when we meet.

I dunno. I guess in a way I just can't help it.

Have you ever been wrongly accused? How did you react?