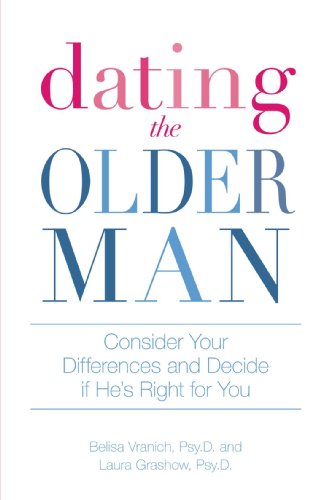 Patiently Waiting for Him

When I started dating older men back in my twenties, I had no idea what to expect. I was unaware of the male midlife crisis. I knew nothing about andropause. These were all hormonal related issues that men went through and I didn't know that I could possibly be a product of their mid-life crisis.

Anyway, I wondered what to expect dating men with thinning hair, grey hair sprouting from here there and everywhere. It was an adjustment every time I dated an older man. Like men, I too am a very visual creature and I had to put aside my personal hang-ups and see the man for who he really was -- a human being, period.

The mature men I met were really no different than the younger men except that they were more stable in their finances, moved a little slower, seemed to hold an intelligent conversation, and really seemed to be into me. I didn't have to worry too much about the wandering eye and the short attention span of a younger beau.

As I learned more and more about these older men, at times I was impressed with their knowledge and other times I felt that I acted more mature than they. I met my share of irresponsible older men, the kind who acted like they had it together, but in reality they didn't. The older women had pushed them out of their lives and now they were desperately seeking anyone who would put up with them. Those men were such a disappointment. I would think, "You decided to reach 40 plus years and act like a fool! You still have nothing to show for your life." In time, I learned more about the mid-life crisis that older men faced and it wasn't any wonder that some were looking for anyone and anything to make them happy.

So what do I want young women to know about older men? Well, I say plenty on my Tips Dating Older Men Blog (learn more below), but for now one thing you need to know is to be patient.

That's right be patient in any and everything you do when involving yourself with a mature man. If you don't have much dating experience, you will find that he can easily do things to make you feel like he is the best thing since slice bread; however, one day in the midst of feeling in love, his emotions can come crashing down, leaving you feeling broken and depressed asking, "What happened? I thought he loved me!" Some of these men are only in love with the idea of being with a young woman, but not committing to her for a lifetime. Besides if you are a beautiful, energetic woman who clearly has a life and he is the total opposite, he knows that eventually you will meet someone better than him, so he will attempt to end the relationship especially if you aren't acting that interested in him.

Know what you are getting yourself into when seeking out a man half your age or more. He is coming with years of experience and baggage. You may admire his intellect at first, but later it may grow on your nerves because he knows so much more than you. There are times that you might question whether you are with this man because you have some kind of daddy hangups. Maybe daddy wasn't in your life, he didn't seem to care about you, he didn't love you and so fourth. If this is you and you look to your older man to fulfill the role of your dad, then you are headed for trouble! No man can or will replace the love of dad, no man!

When you are ready to take your relationship with an older man to the next level, do heed the advice of the women and men around you. Chances are they all grew up around the same time. So they have a pretty good idea what his mentality may be like particularly if he had a dad in his life. As the old adage goes, "It takes one to know one." The men "back in the day" are much different than the men of today. Women were not as independent as they are nowadays. A man who saw his dad and mother interact from yesteryear, may expect you to be the docile, submissive wife. If you know you couldn't ever be docile or submissive then pick a man your own age or one who can accept you for who you are.

Feel free to check out more tips from my blog http://tipsdatingoldermen.blogspot.com When you visit the site, simply scroll down and see some of my latest posts. Thanks in advance for visiting!

Tips to Help You Improve Your Dating Experiences

Why do you bother dating younger or older?

Sometimes we tell ourselves that we are going to improve upon this and that, but we never do until someone calls us out on something. Then we might make a feeble attempt to live our lives better. If you are one who feels like you need to do some things differently in your life, why not start now before someone says something. Losing weight, maintaining healthy skin, and making over your wardrobe are just a few of the immediate things you can do to improve the external you. But what's on the inside is just as important, if not, more. What you say and do also makes a difference. So be sure you are taking in positive people, places and things too!

Is a relationship draining you emotionally and physically?

Is your boyfriend or fiancé suffering from a hormone imbalance?

The Irritable Male Syndrome: Understanding and Managing the 4 Key Causes of Depression and Aggression
Buy Now

What is it that your older date does that irritates you?

When The Older Man and Younger Woman Start Dating

Resource to Check Out

Other Hubs by this Writer

Are You Being Abused?