Why Do We Hate To See Cheaters Find Love?

When I was a child there were times when I'd complain to my mother about various slights or injustices that took place at school or on the playground. More often than not she would come back with the following matter of fact reply, “Life is not fair”.

In some ways hearing that made me even madder than the perceived offense I witnessed.

Some people go to college, study hard, earn degrees and amass student loans requiring many years to pay off. While other people never set foot on a college campus and become millionaires owning car washes, winning the lottery, or marrying into wealth.

I suppose “Luck Counts” is a close relative to “Life is not fair”.

When it comes to relationship cheaters most of us have this image of them crawling back to the ones they hurt begging for a second chance or ending up as a tortured soul on an island alone isolated from family and friends. The last thing we want to see them do is find love and have a happy ending.

They would not keep running these stories if it didn’t sell their magazines.

Who knows if their relationship is on the verge of ending or if they’ll continue to raise their kids and participate in charitable foundations well into their golden years but from what I see they seem to have found their soulmate in one another. Hardcore Aniston fans find this upsetting.

It’s much more palatable to us when a cheater is a lying bas...d chasing younger skirts or a gold digging b...h looking to move up the social and economic ladder with a more successful man.

In our minds there can’t be one iota of good within them.

The truth is if you were "right for each other" no one would have strayed.

It takes a while to set aside the emotion of being hurt and look at things logically.

Although being cheated on is a horrible painful ordeal especially if your ex found what they were looking for or needed in someone else. However aren’t you better off without them?

Being cheated on and betrayed are among the most hurtful things that could happen to you.

Cheating is an immature cowardly selfish act perpetrated by those who are only thinking about themselves in the moment. Most cheaters are not into communicating.

Ideally if someone is not happy with us they should tell us, try and work on the relationship, or end it prior to seeing someone else.

However things don’t always pan out in an orderly fashion.

In an ideal world children would come along after a marriage has taken place.

Marta and Jorge were married for ten years........

They had two daughters and on weekends they would spend time with her brother Jose and his wife Mary. One day Marta discovered that Jorge and Mary were having an affair. Needless to say it broke her heart in two and pretty much destroyed the family nucleolus. To make matters worse Jorge and Mary got married and have been together for 38 years.

Marta however never dated another man because she felt they couldn’t be trusted.

She focused on the raising of her daughters.

Marta now lives in a nursing home in Orange County, CA suffering from various ailments. She’s still very bitter to this day about how her marriage ended.

Although Jorge cheated on Marta she cheated herself in a far worse way.

There are times when things happen to us beyond our control but we still have the power to choose how we will react to those things.

It’s a waste of time and energy to try and keep track of what is happening in the love lives of exes. Hoping and praying for a scenario in which they beg you for forgiveness giving you the power to decide their fate…etc is also a waste of your time.

Your best bet is to move on.

By most accounts it appears that Jennifer Aniston is too busy living her life. She's not waiting for a phone call from Brad Pitt.

Jenny Sanford could care less if her soon to be ex-husband Gov. Mark Sanford ends up marrying his mistress and settling down in Argentina. http://www.cnn.com/2010/POLITICS/02/08/south.carolina.jenny.sanford/

Life may not be fair but thankfully there are over 6 Billion people on the planet.

Suffering from a broken heart does not have to be the end of your world.

With every ending is a new beginning!

Getting past the pain... 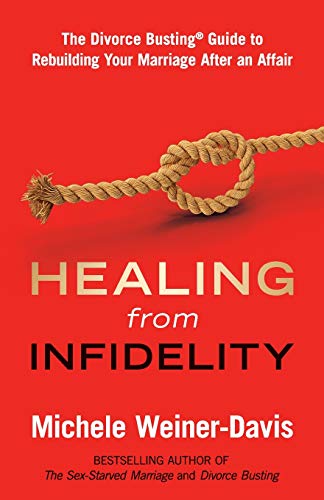 Healing from Infidelity: The Divorce Busting® Guide to Rebuilding Your Marriage After an Affair
Buy Now