"When the Molten Lava Flows, More Will Awaken

Linda is the author of Advent Calendar for the Salvation of Planet Earth, a channelled book published by Gateway books in 1995

Channelled Book Advent Calendar for the Salvation of the Planet Earth

My first channelled book "Advent Calendar for the Salvation of the Planet Earth" was published by Gateway Books in 1995.

I have today opened a copy of this book intuitively with guidance from the Higher Beings, to give you some insight for what is going on now on our planet - remember this book was channelled around 1994 - The words in the title "When the molten Lava flows, more will awaken" comes directly from this book.

"Through direct communication we have been able to send this message through many different channels. This way it will be heard over and over in slightly different forms. But always the same message of the salvation of the planet Earth. You will not hear any different messages come from this area of the Universe. The area in which we reside is the holiest of places. It does not 'rock and roll' as do your vibrations on planet Earth. We contemplate the higher energies. We breathe them in and allow these energies to control our thoughts and actions. We are very much as you are in spirit, but we have had enough of the more basic types of entertainment. We do not look forward to strife. We know only peace and happiness. We would not choose to inhabit your planet at this time.

As time goes by there will much unleashing of negative powers from those who have allowed their egos to control them. We cannot be responsible for the negative actions that will befall your planet from those who are still totally engrossed in their own power.

There is a two-fold effect which will descend upon the planet Earth. Those who are able to respond will respond faster and more deliberately, but those who are far beyond this type of response will begin to dig deeper ditches for themselves. They must survive somehow, so they will begin to react on a survival level. One of the most basic instincts that mankind has is his own survival. Without the spiritual mantle this instinct becomes highly dangerous. It is without care and concern for others, a primordial fear of extinction. We would be better rid of these type of people, but this cannot be done. The time will come when you walk hand-in-hand with evil upon your planet. We cannot allow this to take control, but it will walk again. There are many governmental powers that have the capacity to explode nuclear bombs which will completely obliterate life on the planet. This will not be allowed to happen. But nevertheless there will be some who contemplate attack.

You can see now perhaps that the information we are giving must be given to those who can respond. Do not attempt to discriminate as to those who will and will not awaken. You cannot always be sure that you are choosing correctly. We will give you all the information you require. It is your responsibility to ensure that all of those who can read will be given access to this material. If it is not responded to it will cause no harm, but if there is no material to read then this will cause much dissent

Take a conscious part in this rebirth

For some time now we have been aware of the awkwardness of the gait of the planet. She will not be very far from calamity when these energies are activated in order to balance her. She will be anchored at this time by the energies that are connected to the souls of the beings that have arisen from their sleeping state. We would suggest also that you all take a conscious part in this rebirth. We can and will use the energies of all of those who have raised their vibrations, but we will be best served by those of you who consciously choose to take part in the evolution of your world.

As always we cannot command a response, but we ask you from our hearts to take part in the biggest command performance you have ever experienced. It is not from your royal family that this is commanded, but from your Mother/Father God. We are only pawns in the performance. Our command performance is to give you as much assistance as we can. We cannot activate the energies without the permission of God. Do you understand now that we come as friends of the Universe, not as tellers of bad news?

We will be showing you just how much interference there has been within the energy system of the Eath planet. She does not activate now from her own energy source, but from the negative powers that have been used within the world during the last decade. Her power system has become defunct. It will only be when we activate the hologram energy system surrounding the planet that she is able to power herself again. As soon as she is empowered, she will begin the cleansing.

We will not allow any more damage to be carried out

Much has been changed since man has used the nuclear energy supply. We cannot emphasise enough the negativity that is unleashed when this power source is used. It is because of the activation of molecules and atoms that this power source has a completely negative action. We do not apologise for using such extreme caution to you on this subject. You are unaware of the damage that it is doing to the frequencies and to the universal energy system. We are at liberty to say here that the damage to the universal energy system is at present minor, for you are not totally connected to this system, but we will not allow any more damage to be carried out.

It is at this point that we have needed to carry out the realignment in order for the universal system to remain whole and intact. You cannot trespass on universal territory without extreme penance. We have warned your governments and your scientists; they have not heeded our warnings. - they have not been published. We will warn again, this time our warnings must be heeded.

Before too long you will experience a complete changeover from the avenues of the scientific fields. They will begin to understand just how much nuclear energy compromises the other energies present. It has been a long time since the first experiments. They are now adjusting their findings to include all of the data that has been discovered. Before, they were trying to hide certain factors, and also they were not really understanding some of their own findings. It is because of the change in attitude that we will be allowed to build more energy and power and use this in our activations. If we were not sure that some of these experiments would cease then we would have to use great caution in activating the more powerful energy forces.

We can now proceed wholeheartedly with the cleansing process. We will be in the main unhindered in our endeavours, but nevertheless the cleansing is still very necessary. Nuclear energy fields do not just disappear, they remain very much a part of the atmosphere and stratosphere. The lines of energy surrounding your planet have become severely damaged by this infiltration. For some time now energy has been escaping along some of these lines. Your weather system has been very much a victim to this, also the energy available to your world.

Very soon, many will gather upon the Earth plane to unite the planet with mankind. There will be a ceremony which will be performed within the next eighteen months which will begin the uniting of energies between the soul of mankind and the energy system of the planet Earth. Many will gather together, it will come at a time when everything has been revealed. We reveal first in words and then in action. " (taken intuitively from Part 3 of this channelled book Advent Calendar for the Salvation of the Planet Earth)

FOR THE MORE UPTODATE CHANNELLED INFO go to the two hubs titled Guidance from the Higher Beings 1 and 2, which gives the first part of the 2nd book I was asked to channel.

2nd Book Our Future - "book of Secrets" Subtitle "one & All" 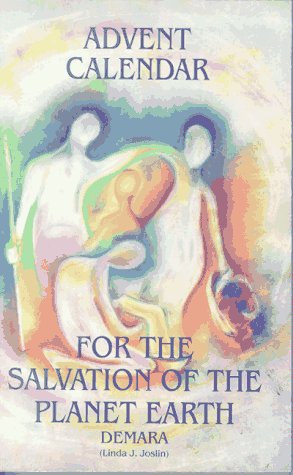 Advent Calendar for the Salvation of the Planet Earth
Buy Now

2nd Book of Mentoring from Higher Beings, received in early 90's but held in the vaults of time Until 2009 when it became available as an ebook! Now in paperba

Book of Secrets: Event Horizon - One & All
Buy Now