The Jewish Months of Av and Elul

These two months lead into the High Holy Day season

The Jewish month of Av contains the saddest day on the Jewish calendar but then, right after that, comes another holiday that represents rebuilding. Elul is one of only two months with no holidays (one before Tishrei, the month of the High Holy Days, and one after) but the month is spent preparing for Rosh Hashana

Jewish Life Cycle
Beliefs, Customs and traditions define every aspect of Jewish life. From the day a Jew is born until after they die, every day marks a different stage of life, each with its own personal and religious significance. The film describes three of the most crucial landmarks, Birth, Bar Mitzva and Death and describes each with a beautiful personal story: The Eighth Day -Religious life for a Jewish man begins on the eights day after his birth, and marks his initiation into the ritual cycle of life. Set...
Buy Now

The Jewish month Av begins with the mourning period we call "The 9 days" during which many people don't eat meat, drink wine, go swimming, go to movies, or plan weddings or other joyous occasions (many Sephardic Jews, Jews whose ancestors come from the Iberian peninsula, keep these restrictions only from the Sunday before Tisha B'Av) . This period leads up to Tisha B'Av -- the 9th day of Av. Tisha B'Av is a fast day, the strictest fast day that the Rabbis decreed (the only stricter fast day is Yom Kippur, which is from the Tora).

Tisha B'Av commemorates the saddest day of the Jewish calendar -- it's the day that both Holy Temples in Jerusalem were destroyed -- the first in 586 BCE and the second around the year 70 CE. It is also the day that Moshe (Moses) came down from Mount Sinai and found the people worshiping the Golden Calf. These are a few of the other events that took place on Tisha B'Av:

Av, though, turns around after that. The 15th of Av (called Tu B'Av is a day for celebration. In ancient times, the single women of Israel would dress in simple white dresses (so men couldn't tell if they were rich or poor) and go out and sing and dance (in an effort to find a husband). It is still seen as an auspicious day for a wedding.

Wilton Hanukkah Metal Set of 4
Great for a variety of treats these cutters can be used for cookies, pastries, sandwiches, and more.
Buy Now

The month of Elul has no holidays of its own. Elul, though, is the month that leads into the High Holiday season. Ashkenazic Jews (Jewish from Northern European countries like Germany, Russia, Poland, etc.) remind people of the coming holidays with blast on the Shofar (Ram's horn) every weekday morning (Sunday through Friday). Later on in the month, Slihot (prayers for forgiveness) are said. Sephardic Jews say Slihot throughout the month of Elul.

Months of the Jewish Year

For more information, Go to Tishrei and Rosh Hashana

This hoodie is only one of several Judaica themed items at our store: 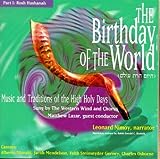 The Birthday of the World, Part I: Rosh Hashanah
Buy Now

This cutting board is only one of several Judaica themed items at our store: