Can You Become One With God

Can You Really Become One with God

Some of this comes from many books and some of it comes from my personal experience. This was written January 1, 2016.

First this is more of a belief of Eastern religions than of Western religions. In the Christian religion there is what the Bible says and there are what people believe and they are two separate things. The Bible says, 1 Corinthians 6:17 (NIV):

But whoever is united with the Lord is one with him in spirit.

Now when you die, you will not have a body. But while you are alive, you have a body, but are still a spirit. Now with Jesus Christ they say that his mother did it with God and gave birth to Jesus. But Jesus says that he is the son of man. Now the bible says that Jesus is God but the Bible also talks about God as something different. God is formless, while Jesus has a form. Or his body has a form but His soul is formless. Isn't that how it is with you also? So maybe Jesus is an example of how you can be.

Christians love to tell you that Jesus said (NIV John 8:12):

I am the light of the world.

But they never tell you that Jesus said (NIV Mathew 5:14):

You are the light of the world.... In the same way, let your light shine before others, that they may see your good deeds and glorify your Father in heaven.

That is what you need to hear. The message of Jesus was not that a book was so great (He disagreed with the Bible different times), not that a place was so great (there were no churches), or that chickens or donkeys were so great. His message was that humans (like Him and you) are great. The Indians (that are from India) say that man is the crown of creation.

What Does it Feel Like to Be One With God.

It does not feel this way or does it? "When does time stop for you? When do you find yourself doing exactly what you want to be doing, and never wanting it to end? Is it painting, or making love, or playing volleyball, or talking before a group, or rock climbing, or listening sympathetically to someone else's troubles?"

God is timeless or lives outside of time and space according to Albert Einstein on cosmology. The above is how Dr. Martin Seligman describes the flow experience. He was president of the American Psychology Association. Psychology has nothing to do with God in theory. Now the father of modern psychology, Sigmund Freud, heard of something that he called the oceanic experience. Now he never felt it but heard of it described to him from different people.

He described it as as a feeling of unbounded oneness with the universe. He says that it probably comes from what the fetus felt since it had not developed an ego yet. Now if you think about it, if you had to stay in a sack and not do anything for 9 months then it would be an extremely unpleasant feeling. So maybe the fetus feels something like the soul that is in unbounded bliss.

Where Do I Fit In

I had a unique childhood because I started doing yoga, kenpo karate and tai chi at age 12. These are all great ways to feel or experience the flow experience. Then later on I would play volleyball in different places like the swim club. I had an opulent (wealthy) childhood and also had a relative that owned a swim club so my family could go there for free.

Now what I experienced playing volleyball was like heaven. Time would stop and I would feel completely content and satisfied. Time did not exist. In other words I wanted to play volleyball 24 hours a day, everyday, for the rest of eternity. Of course I cannot do that. I have to eat, go to the bathroom and clean myself even if you I am very wealthy. I would also read non-fiction excessively for hours and really get concentrated in that.

More recently I talked to woman that I am best friends with who lives In Portugal while I live near Phoenix, Arizona in the U.S.A. She is fluent in 5 languages-- French (she grew up in Paris, France), English, Portuguese, Spanish and Italian. After talking with her for 2 hours I said that I feel so good talking to her that I could talk to her all day, everyday for the rest of eternity. She said that she feels the same way.

But I knew from yoga that it is possible to feel that all of the time no matter what you do. Yoga means 'union.' Now some say that it means union of mind, body and spirit. Now that sounds good. Some people will say that yoga is the most important thing in their life. But actually yoga means union with God. So that is what yoga is for.

I have an article called The Heart of Buddhism. It tells what Buddhism talks about and at the heart of it, it is the same as yoga. You can read it to see how. But in Buddhism they do not talk about God. Do they believe in God? They believe that it does not matter. If God does not exist then it does not matter. If God does exist, then God does not need to do anything. It is you that needs to do things differently and need to change. So instead of saying that Buddha became one with God, they say that Buddha became enlightened. Same thing but different words. Like a car and automobile are the same thing but different words.

In this mental disease people imagine themselves to be more than one person. Maybe people imagine themselves to be an ego instead of being one with God and that is why they suffer. Now the terminology that Eckhart Tolle uses is different than the above. Instead of being one with God or being enlightened he talks about being in the present. Now doesn't this mean the same as time stopping or being out of the realm of time and space.

But what is the cool word that is popular and psychologists use a lot now. The word that is in now is mindfulness. Google defines it as 1. the quality or state of being conscious or aware of something.

2. a mental state achieved by focusing one's awareness on the present moment, while calmly acknowledging and accepting one's feelings, thoughts, and bodily sensations, used as a therapeutic technique.

How To Get There

The way to get there is through meditation. The Pope does meditation everyday. The saints are known for meditation. In fact you do not become a saint like Mother Teresa, until after you die. So a nun said to Saint Theresa of Ávila, "It must be great to meditate without getting distracted." Theresa replied "What do you think I am, a saint?"

Also they do meditation in yoga and of course Buddhism is known for meditation. In fact are there statues of Buddha playing golf all over the world? No! There are statues of Buddha doing meditation. Now the posture or poses that yoga is popular for, is called hatha yoga. Meditation is called raja yoga. Do you know what raja means? An Indian king or prince. So meditation is the king of yoga. What would you expect karma yoga to be about? It is about doing good deeds like Mother Theresa.

They have studied this in Positive Psychology. Now there is a myth that Mother Theresa had a hard and miserable life like Donald Trump. Doesn't he talk like he has had a miserable life, even though he is a billionaire? There is saying that money cannot buy happiness. Mother Theresa had very enjoyable life with nothing to worry about. Isn't that what the bible talks about?

Who is supposed to worry about tomorrow if not Mother Theresa who won the Nobel Prize for Peace. The new international version NIV) of the bible says, Matthew 6:34:

Therefore do not worry about tomorrow, for tomorrow will worry about itself. Each day has enough trouble of its own.

Now is that the same as what Eckhart Tolle teaches about living in the present. In fact if you do meditation you see that the mind wants to worry about the future or think about the past.

When Positive Psychology students spent a day of doing good deeds as an experiment, they were driving home in an van. Just how high can good deeds or karma yoga make you feel. So a guy asked to be let out a mile before his house. He went over to an old lady he did not know who was shoveling snow. He took her shovel and started doing the shoveling. A female student in the van saw this and started crying. She said that she wanted to marry that guy!

So there are a lot of words but they are talking about the same thing. To be in the highest experience that you can feel.

Here is 6 minute video by Prem Rawat that teaches the meditation that I do. He says "Do you feel all the peace that you want in your life."

"I tell the believers to know. Not to believe --just to know." "Knowledge of the self " Prem Rawat.

To Heaven and Back: A Doctor's Extraordinary Account of Her Death, Heaven, Angels, and Life Again: A True Story 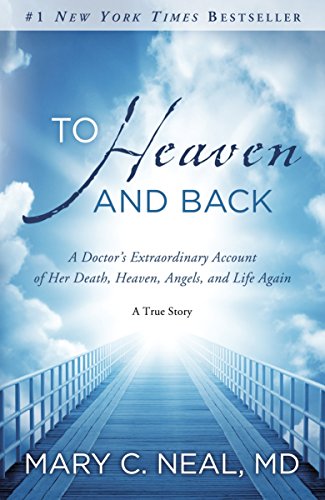 To Heaven and Back: A Doctor's Extraordinary Account of Her Death, Heaven, Angels, and Life Again: A True Story

Mary C. Neal, M.D. is an orthopedic surgeon. To Heaven and Back is Mary’s remarkable story of her life’s spiritual journey and what happened as she moved from life to death to eternal life, and back again. "I do not know the answer [why this happened], but I am a scientist by training, a skeptic by nature, and a very concrete, rational thinker." She learned many things and let's us know them. A lot of this book is free on this.