I am a follower of Christ and have a passion to share the good news of the gospel with as many people as possible.

This sign, if it is real and not photo-shopped (follow link to see the sign), breaks my heart and the heart of God. It is cold and likely to drive people away from Christ. Non-Christians will be able to throw stones at it. It makes it sound like Jesus does not love surfers, skateboarders, musicians, artists, vegetarians, occupiers, activists, addicts, or fornicators. The only sins in the entire list were fornication and being addicted (lust, idolatry) to something other than God. The only good thing about that sign is it does bring up an opportunity to have a conversation about what the Bible actually has to say on the subject of Heaven and Hell.

What Does the Bible Teach Regarding Heaven and Hell?

The Bible teaches that there are two possible destinations after death. Heaven is where God is and will take all of His people for eternity. The book of Revelations describes Heaven as having walls made of pure jasper.The streets are gold so pure that is looks like glass. There will be no lights because God Himself will dwell with His people and light the whole city with His holiness.

People make jokes about how Hell will be a party; let me assure you that will not be the case. Hell is a place of torment. Is Hell for eternity? Yes, it will last forever and ever. Once you are there, there is no way out. The Bible describes it as a lake of fire.Satan and anyone who does not have their sins forgiven will dwell there for eternity.

Great book on Heaven and Hell by R.A. Torrey 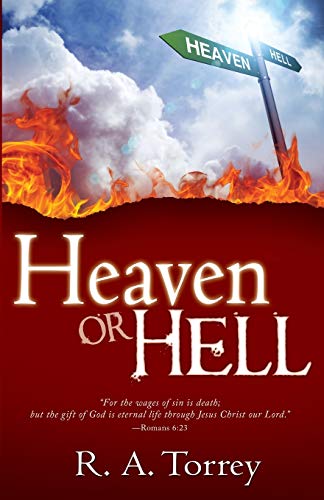 Are All Religions Equal?

It is a popular belief today that all religions lead to God.Are all religions equal? Even a brief look at the world’s major religions and they have many different truth claims. Let us look at a few of them and see what differences there are.

Buddhism regards God as impersonal and monastic. Monastic can be defined as a unified reality. Hinduism is both monastic and polytheistic. Polytheistic is the belief in multiple Gods. Christianity teaches that God is personal and monotheistic.

Sin is defined as any thought, word, or deed that is contrary to God’s law. New agers view sin as ignorance and unprofitable behavior. Christianity views sin as an offense against a holy God.

Creation of the World

Christianity is the only religion that explains the origin of the world. God is All-Powerful and Ruler of the Universe. All of the other religions start with the universe already in existence and do not explain the how.

If Jesus was not raised from the dead, then Christianity is a hoax and should be discounted. Produce the body and Christianity falls. The problem for skeptics is that Jesus was raised from the dead. He appeared to his disciples over a 40-day period.I know what you are thinking; his disciples took and hid the body. No, they would have had to take out the Romans soldiers who were guarding the tomb, not very likely because the soldiers would have faced execution for failing. Second, his disciples are another piece of evidence. They were scattered when he was arrested and stayed in hiding. After Jesus ascended to heaven, 11 out of the 12 Apostles were killed because of their faith in Jesus. All they had to do was either produce the body or say they made it up to spare their own lives, but they did not. They chose to die telling others about Jesus. No rational person would die for something they knew was a lie, especially by their reaction after he was arrested. Jesus also appeared to over 500 people at one time in Jerusalem. There is no way 500 could make up the same story and details. If you ever played a game where you tell the person next to you something and have them repeat it, what you said is twisted by the time it gets back to you.

The Real Question is Where are You Going When You Die?

Of another way of putting it is what do you have to do to get to heaven? Let us look at what the Bible says. The Bible says in Romans 3:23 “all have sinned and fall short of the glory of God.” God demands perfection and we fall short of it. A sin is any word, thought, or deed that is contrary to the will of God. Can sin be forgiven? Yes, but only by the shedding of innocent blood can sins be forgiven by God. That is why Jesus came to die 2,000 years ago. The Bible says in John 3:16, “For God so loved the world, that He gave his one and only Son, that whoever believes in Him, shall not perish, but has eternal life.” Getting back to the issue with the sign, God loves you so much, that he sent Jesus to pay the penalty of your sin. If you reject that payment, you will spend eternity in hell. If you repent and ask forgiveness of your sins and ask Jesus to save you, He will. In Revelation 3:20 Jesus says, “I stand at the door and knock. If anyone hears my voice and opens the door, I will come in.” Jesus is standing at the door to your heart, will you let him in?

I think the sign should have said, “Jesus Saves, Sinners Welcome, Repent before it is too late!”