Chrysolite and Chrysoberyl are the same stone, only having changed names in more modern times. The original name was used up to the Victorian age. This is the tenth stone in Aaron's Breastplate, and the seventh foundation stone in the New Jerusalem. Occasionally, scholars will refer to this gem simply as Beryl, which is a different stone altogether. There are however, beryls that can be a yellowish-green in colour, similar to the Chrysoberyl.

The Chrysoberyl is classified as the third-hardest stone on the Mohs Scale, at 8.5. It is typically a yellowish-green in colour with the stones used for gems being more yellow than green. Beryl can come in yellowish-green, but is more known for it's sea-green colorations. Beryl has been mined in various places around Africa. Chrysoberyl has been found in Madagascar and Zimbabwe in Africa as well. So the stones the Egyptians gave to the Hebrews could easily have been either one, though most sources seem to settle on the Chrysolite, now named Chrysoberyl. 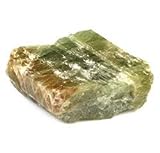 Asher and Bartholomew - Associations with the Stone

Asher's name means "blessed", "happy", "prosper", "straight", "honest", and "go, lead or guide". When Jacob blessed Asher, he said, "his bread shall be fat, and he shall yield royal dainties." Jewish sources say his name means "good fortune", and that his tribe would indeed be fortunate among Israel, as some of the best produce would come out of that portion of the land.

Bartholomew's name in Hebrew means "son of a plowman", but like so many in today's society, it seems as if he became known by his lastname instead of his firstname. We learn of his first name in the book of John where he is called Nathanael. The meaning of Nathanael, which is a derivative of the Hebrew name, means "given/gift of God" or "God has given".

Nathanael begins his time among Christ's disciples in a very pessemistic observation, "no good thing can come from Nazareth", when Philip wants to introduce him to Christ. But Jesus sees him as a realist, and a learner, a true Israelite needing a sign, so he grants him one by observing that He'd previously seen him "under the tree". This is all the proof Nathanael needed, and he became one of the 12. He and Philip become inseparable partners in ministry.

So what does this mean for the Bride of Christ?

Colours have meanings in Scripture, and if we were to take the meanings of yellow and green and put them together, we'd have "glorious life". When compared to the meaning of Asher's name, we see an amazing similarity! Indeed, God said in His Word that He has come to give life and that more abundantly! This isn't merely speaking of life on this earth, but life spent sharing in His glory for all eternity!

It is said that the Chrysoberyl, though plentiful and beautiful, often doesn't make it into jewelry. It is somehow unassuming, like some scholars' descriptions of Bartholomew, and possibly due to it's plentifulness, somehow looked down on as in the city of Nazareth where our Lord grew up. Even so, God can take what the world casts aside, and use it for His glory, bringing light and life to those it touches. In the same way, God wants to use us, His Children, to reach out to those around us with the Light of the Gospel of Eternal Life. It doesn't matter how gifted a person may think they are. It doesn't matter, how social they are, or how quiet they are. God created each of us with a purpose to be used for His glory, and desires, if we will let Him. All we have to do is answer His call, get up from under our tree, and walk into the blessings and joy God has for us.

Today we covered the Tenth Stone in Aaron's Breastplate