A Prodigal Son Comes Back Home to God

Edwin was a Christian who became an agnostic in college. With help from friends, and by God's grace, he reverted back to the Faith.

The Good News from the New Revised Standard Version

11 Then Jesus said, "There was a man who had two sons.

12 The younger of them said to his father, "Father, give me the share of the property that will belong to me.' So he divided his property between them.

13 A few days later the younger son gathered all he had and traveled to a distant country, and there he squandered his property in dissolute living.

14 When he had spent everything, a severe famine took place throughout that country, and he began to be in need.

15So he went and hired himself out to one of the citizens of that country, who sent him to his fields to feed the pigs.

16 He would gladly have filled himself with the pods that the pigs were eating; and no one gave him anything.

17 But when he came to himself he said, "How many of my father's hired hands have bread enough and to spare, but here I am dying of hunger!

18 I will get up and go to my father, and I will say to him, "Father, I have sinned against heaven and before you;

19 I am no longer worthy to be called your son; treat me like one of your hired hands." '

20 So he set off and went to his father. But while he was still far off, his father saw him and was filled with compassion; he ran and put his arms around him and kissed him.

21 Then the son said to him, "Father, I have sinned against heaven and before you; I am no longer worthy to be called your son.'

22 But the father said to his slaves, "Quickly, bring out a robe—the best one—and put it on him; put a ring on his finger and sandals on his feet.

23 And get the fatted calf and kill it, and let us eat and celebrate;

24 for this son of mine was dead and is alive again; he was lost and is found!' And they began to celebrate.

25 "Now his elder son was in the field; and when he came and approached the house, he heard music and dancing.

26 He called one of the slaves and asked what was going on.

27 He replied, "Your brother has come, and your father has killed the fatted calf, because he has got him back safe and sound.'

28 Then he became angry and refused to go in. His father came out and began to plead with him.

29 But he answered his father, "Listen! For all these years I have been working like a slave for you, and I have never disobeyed your command; yet you have never given me even a young goat so that I might celebrate with my friends.

30 But when this son of yours came back, who has devoured your property with prostitutes, you killed the fatted calf for him!'

31 Then the father said to him, "Son, you are always with me, and all that is mine is yours.

32 But we had to celebrate and rejoice, because this brother of yours was dead and has come to life; he was lost and has been found.' "

Personal Story and Outlook on Life

1) Childhood Faith and a Mother's Love

2) Agnostic as an Adult

1) Childhood Faith and a Mother’s Love

When I was a child, I remember my mother trying hard to make me a “religious” person. She took me to church every Sunday, made me say my night time prayers, and to say grace before meals. But when I grew up and went to college, I became an agnostic. Like any college freshman, I tried almost everything that was taboo. This broke her heart, but, she never gave up on me. She reminded that if I ever needed help, I should call upon the Lord. She said this so many times, the advice just went in one ear and out the other.

2) Agnostic as an Adult

After college I got a job in 1992 that required a lot of traveling. I was driving to Redding, California using just a map. I’ve never been to Redding before and so despite the map, I got lost. It was already night time. I eventually ended up in the woods with no signs of civilization, just wild animals and trees. I panicked. I started imagining that I would die out there and the police would find my body a few weeks later. Then I remembered what my mother told me. So in desperation, I called out to God, “Lord, if you really exist, please help me come out of this alive.”

After praying, I started driving around to see if I can find my way back to the town. Eventually I did, but I couldn’t find the way to my hotel. I asked everyone I ran into but no one could help me. So I parked in an empty parking lot, turned on the lights inside the car, and looked over my map again.

Suddenly, I heard a voice ask, “Can I help you sir?” I looked out my window and saw this young man, probably in his 20’s. He asked again, “Do you need help?” I don’t know where he came from. When I entered that parking lot, there was nobody there. I didn’t even see any car enter the parking lot. Yet here he was. I was hesitant to go out, but after seeing there was a woman and child in his car, I had the courage to go out of my car and said, “Yes, I’m lost and need to look for this hotel.” He said he knew exactly where that hotel was and pointed me to the right direction. After waiting for him to leave, I followed his instructions and was able to find my hotel.

That night, I was so stressed I decided to relax by watching TV in my hotel room. As I was channel surfing the TV, I saw the Rev. Billy Graham giving a sermon in a large outdoor stadium. I’ve heard much about him so out of curiosity, I watched to listen to what he had to say. He asked if we ever wondered why despite all our accomplishments, it didn’t seem enough. And did we ever feel unhappy despite attaining what we wanted? He said it’s because we lacked only one thing. I said to myself, these are the exact same questions I’ve been asking myself all these years. So I asked, “Then tell me, what’s the answer?” He said it’s because we never made God the most important goal in life. We chase after things that cannot bring satisfaction. Only God can truly satisfy us.

I felt like a ton of bricks just hit me. Right then and there, I realized he was right. I found myself weeping like a child, feeling foolish for wasting my life pursing everything else that served as a poor substitute for God. So the Rev. Graham said we should get down on our knees right now and accept Jesus as our Lord and Savior. So I did.

My life since then has changed. I was able to quit my addictions cold turkey. I developed a deep desire to know, love and serve God. I started reading the Bible my mother gave me, which I never touched before. I started going to church again and desired to know more about what it means to be a Christian. I felt like I have finally come back home, like the prodigal son in today’s Bible reading.

Friends, are you are struggling, like me before, to find your purpose in life? Do you feel that something is missing? Are you still unhappy despite the fact you’ve been there and done that? Have you strayed away from God? Look no further. If you turn to God, then you have found everything your heart desired, since He is the one true source of happiness.

Father God, thank you for showing us patience. Thank you for never giving up on us. We implore You to give us the grace to realize that our lives have no meaning without You. Call us back home. Take us back the way the father took his prodigal son back. We ask for forgiveness for our sins. We do not deserve to be called your children. But because You love us unconditionally, You will never abandon us. We pray for our brothers and sisters who have gone astray and ran away from You. May we all be reunited again someday in Your happy home. We pray in Jesus name. Amen. 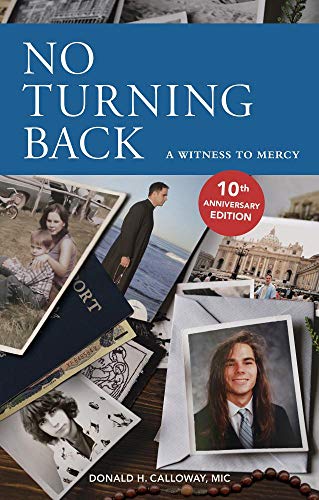 No Turning Back: A Witness to Mercy, 10th Anniversary Edition
A Catholic friend lent me this book. It's the story of young man whose father was a navy man stationed in Japan with his family. This wayward son got into trouble and prison. But through the persevering prayer of his mother, this prodigal son finally returned to God. I liked this autobiography because it reminded me of my own journey. I hope this book gives hope to those in a similar situation. The takeaway from this book is to persevere in prayer and never lose hope because God will hear your prayer and welcome back the prodigal son or daughter in your life.
Buy Now