Even More Facts About Atheism

M. T. Dremer has been an atheist for more than 20 years and has been debating theology openly for almost 7 years.

I never intended my ‘some facts about atheism’ hub to become a series, but after ‘some more facts about atheism’ I discovered that there were still a few more common misconceptions that I wanted to address. As with before, these articles are the observations of one atheist (me) and therefore do not reflect the views of all atheists. The purpose is to dispel as many generalizations as possible.

Atheists don’t think they have all the answers.

Having spent a lot of time discussing atheism on various internet forums, one of the frustrated responses I’ve seen is this one. It’s some variation of “how can you think you have all the answers?” I assume this is a response to things like the big bang and evolution which are seemingly finite answers to infinite questions. Though I’ve always found this response perplexing because atheism is the suggestion of an absence of something, rather than the existence of something specific (God). In fact, I don’t know any atheist who would claim to have all the answers to anything. But I think this is a misconception of atheism as an equivalent to faith-based belief, rather than being a conclusion. I addressed this in my second article, but I’ll reiterate that atheism isn’t faith-based. The evidence in the world around us, as of right now, has led us to the conclusion that there is no god. We don’t know all the answers of the universe, nor can we definitively disprove god, we just know that the data available points in a different direction. Atheists are capable of staring at the universe in awe and wonderment, it’s just that we haven’t assigned any labels to the unknown.

Coming Out Atheist: How to Do It, How to Help Each Other, and Why
Buy Now

Speaking of evidence, there is a lot more that goes into atheism, as a conclusion, than just astrophysics and evolutionary biology. I think there is a tendency for some theists to assume that atheists are using science as their only grounds for disbelief. In other words, the big bang and evolution are the pillars of our logic. While I would argue that all evidence is technically scientific, most atheists have come to their label through a vast array of fields. I’ve stated before that my atheism was influenced heavily by my study of literature. Puritan writings in early America showed me the mechanical usefulness of religion, which distanced it from the spiritual. Reading epic fantasy novels showed me that average humans could conceive of, write, and present a creation myth to the world, without divine intervention. And my study of ancient mythology showed me the enormous pool of forgotten deities that, by today’s standards, are no different from Santa Claus or the Easter Bunny. Human imagination and history are my basis for atheism. The sciences are just one area I’ve learned and considered before coming to my conclusion.

Atheists do not condone atheistic dictators.

Some dictatorships have, through time, used atheism as a tool to further their agenda. If you want to establish yourself as a supreme leader of a country, you can’t promote a power higher than you. Because of this strategy, some theists will point to these dictatorships as evidence that atheism doesn’t work, or that it is somehow corrosive to society. When I see these arguments I often point out that Christianity has its share of humanitarian atrocities. Often times the response is that those doing bad things in the name of Christianity aren’t real Christians or that they aren’t following what the religion is actually teaching. And I agree that a whole belief system shouldn’t be judged by its most extreme followers. Which is exactly what I’m trying to do with atheism. Dictators, who are also atheists, do not represent atheists in the same way that the Salem Witch Trials do not represent Christianity. My mission is to get people to see that. 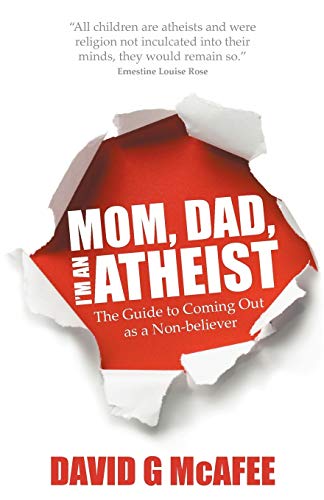 Mom, Dad, I'm an Atheist: The Guide to Coming Out as a Non-believer
Buy Now

Atheists don’t want to overthrow Christianity (or any other religion).

Which leads me to my next point; atheism, as a belief system, has no end game. While I’m sure there are militant atheists out there who want religion gone, they aren’t the majority. Your average atheist is the same as your average theist. They get up every morning, go to work, come home, kiss their family and watch some TV. People who have come to atheism as a conclusion (rather than being forced into it by a dictator) are not going to go to war in order to spread atheism. And people who stir the pot, like Richard Dawkins and David Silverman, aren’t going to demand their fans burn down a church. Because of this, atheism isn’t something to be feared.

Why do atheists care what Christians think?

There are many theistic religions in the world, so why do atheists seem to focus on Christianity whenever the topic comes up? The simple answer is that most of these discussions (at least the ones I participate in) concern the United States specifically. And, in the United States, the majority of the population is Christian. If the majority was Muslim, then atheists would be debating Muslims. But, again, why would an atheist care what a Christian thinks? It doesn’t affect our beliefs and people can say whatever they want; it’s a free country. Well, remember I said that Christianity is the majority and, in a democracy, the majority rules. That means they have legislative power, monetary power and a larger platform from which to speak.

There is nothing inherently wrong with this, but there are two potential problems. The first is the freedom of religion. Our government isn’t supposed to establish any sort of favoritism. It’s the basis for all legal battles between atheists and Christians. However your average atheist probably doesn’t care about that nativity scene. It’s the second potential problem that concerns me more, which is that a louder voice has the power to misrepresent and even harm a quieter voice. In other words, if the majority population of a country believes that atheists are the same thing as dictators, what’s to stop them from banning atheism? They have the numbers to do it. What’s to stop them from driving atheist’s out of business? They have the money to do it. What’s to stop them from associating atheism with so much negativity that no one ever wants to go near it again? Now, obviously I don’t expect any of that to happen, mostly because of our freedom of religion, but public opinion can be a powerful thing. Atheists care what Christians, and other theists, think because Christians are the ones in a tank, while we’re on a bicycle. And, the last thing you want to do is get on the bad side of the guy in the tank. But the solution isn’t to match arms for arms, it’s to dispel generalizations so that the guy in the tank comes down and shakes our hand. There is no reason we can’t share this country.