Harold Camping previously predicted humanity's demise on May 21st, 2011. When the world did not end that day he revised his prediction and said that the end would come on October 21st, 2011. As a retired engineer and multi-million dollar Christian media mogul, he had a huge following and was considered to be very credible. His predictions were based upon an analysis of the dates discussed in the Bible. How did Camping come to this conclusion? If you're interested, check out his math in this article at Business Insider.

The Large Hadron Collider is the world's largest particle accelerator. Built by CERN over a 10 year period, this device allows physicists to study the world of subatomic particles. It also had a lot of people concerned that it might cause the formation of a black hole which would destroy the earth. The LHC was first used on September 10th, 2008. Fortunately for us, the world did not end.

In 1995 an individual name Nancy Lieder claimed that she had been contacted by aliens from the Zeta Reticula star system through an implant in her brain. Using her website, she conveyed messages of doomsday that would occur sometime in May of 2003. Her predictions stated that a planet sized object (now commonly called Nibiru or Planet X) would pass by earth and induce a pole shift. This reversal of the magnetic pole would lead to the demise of humanity. When this date passed and nothing happened, many of Lieder's followers changed the prediction to December 21st, 2012.

As the end of the millennium approached many people predicted that this would also be the end of the world. In addition to religious leaders, computer scientists around the globe also contributed to the fear of the impending apocalypse. Theorists concluded that a computer software problem associated with the two digit representation of a year would cause the collapse of computer systems and networks around the world. While this problem was indeed real, worldwide computer systems did not collapse and the world did not end on January 1st, 2000.

In 1974, John Gribbon Ph.D and Stephen Plagemann published a best-selling book called The Jupiter Effect. Among other things, this book described an end of the world scenario that would occur on March 10th, 1982. On this date the precise alignment of the planets in the solar system would cause many natural disasters to occur around the globe. The idea was that the gravitational forces of the planets in an aligned arrangement would create a noticeable tidal effect on earth as well as the sun. However, the date passed and no such disasters occurred.

The French astronomer Nicolas Camilla Flammarion was a talented scientist who is noted for many contributions to his field. Among them was his prediction that Halley's comet would cause all life on Earth to die. His theory was that the gaseous tail of the comet would engulf earth as it passed by causing mass suffocation. However, the world did not end when Halley's Comet came close to Earth. However, the public did suffer a minor cause of mass hysteria.

This prediction of the apocalypse first began with a book published in 1641 (and later republished in 1862) written by Charles Hindley. The book was a best seller and as the 1881 date drew near, citizens of England began to prepare for the worst. Meanwhile, a Scottish Astronomer named Charles Piazzi Smyth who was intrigued by the prediction began finding clues of the apocalypse during his research of the Great Pyramids of Giza. Based on a number of things including measurements, the orientation of the pyramids, and even the number of notches in the great pyramid's galley, Smyth was convinced that 1881 was year that the world would end. Of course his research into the pyramids was later shown to be purely coincidental.

On the morning of May 19th, 1780, the skies became unusually dark over New England. For over 15 hours the skies remained black. It was so dark during the blackout that residents began to panic fearing that this was the end of the world. Even the animals in town weren't acting normal. The darkness ended around midnight when the stars once again became visible in the night sky. So what exactly caused the blackout? No one knows for sure, but it is believed that smoke from a nearby forest fire combined with heavy fog lead to the day's darkness. 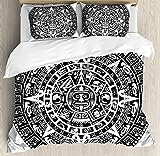 In 1499, the German mathematician and astronomer Johannes Stöffler predicted that a great flood would inundate the world on February 20, 1524. Although he was a well educated and talented mathematician, his failed prediction proved to severely damage his reputation. He later recalculated the date to 1528 however his revised prediction received very little press.

Pope Innocent III predicted that the world of end exactly 666 years after the rise of Islam. The prophet Muhammad began lived from 570 to 632. In 610 he began preaching and by 618 he had amassed a huge following. By the end of Muhammad's life Islam was an unstoppable force that already consumed most of Arabia. By the time Pope Innocent II made his prediction, Islam had spread into Asia, India, and Africa.