Why I'm making this page about the Righteousness of God

I'm making this page about the Righteousness of God because a knowledge of God's righteousness is both somewhat needful in obtaining our eternal salvation and also as a comfort in our trials and testings and every day living. It is also one of things we are told by Jesus to seek first in Matthew 6. Thus, we should know what it means.

Read more about the righteousness of God:

God is righteous in and of Himself

The first definition of righteousness, from the Greek word dikaiosoune (above) is that of conformity to the claims of a higher authority, and that it stands in opposition to lawlessness. God is righteous because He follows His own laws. Since He is the creator and sustainer of the Universe, He Himself is the highest authority. There is no-one higher. Thus, he could also break or change His own laws if he wished and He still would be righteous, since He is the final authority. If we break his laws, we are unrighteous because He is the final authority. Thus, as the above picture says, Righteousness is God and God is righteousness.

Read more about the righteousness of God as it relates to our daily lives:

The Righteousness of God in relation to our salvation:

Although God is love, He is also righteousness. Thus He cannot simply overlook sin or pardon it without a basis to do so. To simply overlook sin would be to go against His very nature. That's why he had to send His only son, Jesus to suffer and die for our sins. That's why Paul says in Romans 3:21, "But now the righteousness of God without the law is manifested..." and in verse 26: "To declare...His righteousness: that He might be just and the justifier of him which believes in Jesus." God's righteousness demanded Christ's sacrifice and now accepts it on behalf of all who will believe and accept it. By accepting the sacrifice of Christ, His righteousness is applied to our account. Paul uses the example of the faith of Abraham in Romans 4:3. "Abraham believed God and it was counted to him for righteousness." He further clarifies the issue in verse 5, saying "But to him who does not work but believes on Him who justifies the ungodly, his faith is accounted to him as righteousness."

Listen to this sermon on God's Righteousness by David Middleton:

Read more about the righteousness of God in salvation: - Mostly commentaries on Romans: 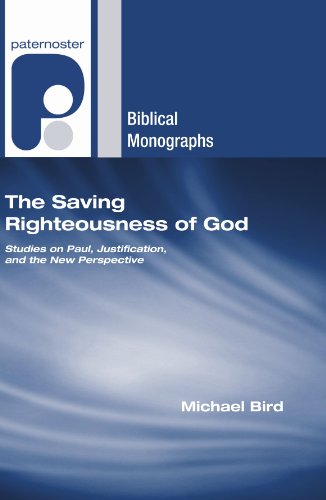 The God and the Gospel of Righteousness
[From an Amazon review:] What is God really like? And what should we include in the gospel to unbelievers? This small booklet tackles those questions head on and is a quick easy read packed with lots to rethink.
Buy Now

The Righteousness of God in daily life.

Sometimes when things happen that seem to us unjust, it is hard to understand how God can be righteous. In times like that, we want to cry out to God, and ask "WHY?" But this is where the real trial of our faith comes in. We must continue to believe that He still is righteous, and, even though we can't see how at the moment, He is still working out things for the good, as he has promised to do (Romans 8:28). In Genesis 18:25, In arguing with God over the salvation of Sodom, Abraham confronts the character of God and asks Him a rhetorical question: "Shall not the judge of all the earth do right?" When we are faced with a seemingly unjust situation, we can ask the same question. It's not wrong to ask the question as long as we remember that the answer must be a resounding "YES! YES, He shall do right, because He is right!"

Is God a Moral Monster?: Making Sense of the Old Testament God
[From Amazon:] In this timely and readable book, apologist Paul Copan takes on some of the most vexing accusations of our time,
Buy Now

So, the righteousness of God should enable us to live by faith. Check out this hub:

If God Is Good: Why Do We Hurt?: 10-Pack
[From Amazon:] Out of the deepest hurts of the human condition, Randy Alcorn brings into clear focus our most pressing questions about evil and suffering...
Buy Now

And trusting the righteousness of God helps to see us through our trials and testings. Check out this hub:

Pray. The answer of God's righteousness just may surprise you!

For more on the above verse, you can check out several commentaries here:

Now, check your understanding by taking my little 4 question quiz: