HOLY SMOKE - IS THAT A GHOST?

When the old Florida pub was demolished to make room for the five-star Crowne Plaza Hotel, the old-timers of the district had a classier place to drink. And for one little old lady, it meant a classier place to live. Nicknamed ‘Flo from the Florida' - this gentle lady ghost was one of the first guests to check into the luxury establishment on opening night, and she liked it so much she stayed.

The Crowne Plaza's chief engineer has had several encounters with ‘Flo' - but none have ever worried him.

‘She seems to confine herself to the basement area, probably because the site of the old Florida Hotel is down there,' he said.

‘I have felt her move past me on several occasions. It's a little eerie, but you get used to it.

‘She also seems to have a sense of humor. She likes to move things around to let you know she's there.'

Several staff have had doors open and close on them in rooms that were empty at the time. A few older staff members recall seeing her dancing in the ballroom.

But all insist she is a friendly ghost, and one of the best behaved guests the hotel has ever had. 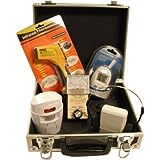 I wrote the piece above after a local radio station sent me to the Crowne Plaza Hotel on Black Friday to report live from the basement.

The basement of the hotel is a maze of narrow passageways, used mainly by the maintenance staff to access the network of wiring and plumbing - and here I was, holding a microphone, with a photographer standing beside me, waiting for something, anything to happen.

After interviewing the engineer live, I signed off from the radio and decided to set up a photo shoot for an article I was planning to write. I draped a sheet over the engineer, placed a lamp behind him to give him a spooky glow, and instructed the photographer to start shooting.

After about six photos, a strange mist began to form behind our sheeted engineer - I glanced at the photographer and he nodded that he too could see it. Neither of us said a word in fear that the engineer might ruin what appeared to be the real ghost from the Florida.

The photographer frantically clicked away, the mist grew larger - and then suddenly, the engineer screamed, jumped, swore and pushed past us with the tail of his sheet on fire.

Our ghost was nothing more than smoke caused by the sheet touching the lamp.

I never saw Flo from the Florida - and I never saw the engineer again either.'