Wyoming became the 44th state in the United States in 1890. The name Wyoming comes from the Dakota Indian word "mscheweamiing" which means “at the big flats” or “large plains.” The population of Wyoming was 584,153 in 2014. It sits on 97,818 square miles but has only 605 documented cemeteries, many of which are remnants of ghost towns.

Fort Bridger Cemetery is located at the corner of Highways 217 and 219 in Uinta County. There are a little over 1,100 interments here dating back to the early 1840s.

There used to be a ghost here, but now there’s not. This is more than a ghost story; it’s also a love story.

In the summer of 1987 the caretaker began seeing the ghost of an older gentleman wearing a white cowboy hat. He would follow the caretaker around as he went about his business and would sometimes even help him.

Eventually the caretaker recognized the man. His name was Carl Vestal Dean and he had died that spring at 66 years of age. Carl had left behind a widow, Alma Grace.

He continued to hang out with the caretaker until the next summer. In June Alma Grace died. Apparently Carl had just been waiting patiently for his bride because after her death he was never seen again.

Gebo Cemetery is located west of the ghost town of Gebo and north of Thermopolis in Hot Springs County. Gebo was a mining town named after Samuel Wilford Gebo, who established the Owl Creek Coal Company. In its heydey in the 1930s Gebo had a population of over 20,000. IN 1971 the town was bulldozed, leaving behind just a few buildings and the cemetery.

There are approximately 43 interments here with dates ranging from 1914 to 1936. Over half of the graves are those of babies and very young children, which explains why the most common hauntings here are the sounds of children playing and babies crying.

Iona-Kane Cemetery is also known as Kane Cemetery. Kane is another ghost town that was two miles south of where the Bighorn River and the Shoshone River meet in Big Horn County. The federal government bought up the lane in Kane before the Yellowtail Dam in Montana was completed. The cemetery is still at its original location one mile north of where the rivers meet. It now lies within the Bighorn Canyon National Recreation Area. There are a little over 100 interments here dating from 1899 to 2000.

There is one named ghost here known as “The Blue Lady.” She is said to be a glowing apparition that looks beautiful from far away but the closer she is the uglier she gets. Legend has it that she had an abusive husband that drowned her children and now she is looking for them.

Sheridan Municipal Cemetery is also known as Mount Hope Cemetery which was its original name. There are over 21,000 interments dating back to the 1870s. It can be found on Meridian Street in Sheridan in Sheridan County. There is a Congressman, a Senator, and a Governor buried here.

The only hauntings here are audible, not visual. Voices, whispers, footsteps, other odd sounds and sometimes crying are heard here.

Mount Pisgah Cemetery is located at 804 South Emerson Avenue in Gillette in Campbell County. There are close to 6,000 interments going back to the late 1870s.

This is an historic pioneer cemetery said to be haunted by many different apparitions. Visitors have reported seeing the ghost of a jogger in the late afternoon. He disappears at sunset.

Many ghosts have been seen standing beside various graves and there is one woman dressed all in white, but has no face, who can be seen wandering about. 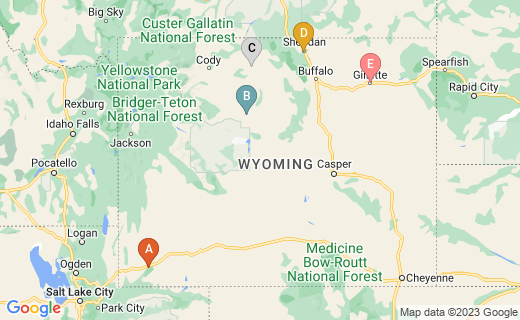