Many people have heard of Zener Cards also known as ESP Cards. They may not know them by name but they are familiar with the symbols on the cards and the basic testing structure. Zener cards are a set of twenty-five cards that contain five circles, five squares, five Greek crosses, five five-pointed stars, and five cards with three wavy lines. They were developed by two psychologists by the name of Karl Zener and Dr. J. B. Rhine in the early 1930s for testing extra-sensory perception or ESP. Dr. Rhine named the cards after Karl Zener.

Zener Cards were originally made with thin, almost translucent paper. They were excited when the people who were tested actually scored very high. However, it was discovered that the reasoning for the high scores was because the people tested could see through the thin paper or the ink had bled through the paper. With a redesign, they made sure the cards could not be seen through. In fact, the subsequent deck even had an illustration of a building at Duke University printed on the back as an extra security to ensure no subjects could see through the cards.

When it comes to testing someone to see if they have ESP, there were a few different ways they conducted the test. The most basic way of testing is quite simple. First, the experimenter, the person conducting the test, would shuffle the cards. Next he would pick up a card and record the subject's, the person being tested, answers. This scenario continued until they finished the whole deck. 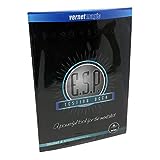 Many times there would be a third person in the room with a video camera. This was to ensure that the experimenter wasn't sending any kind of clues to the subject. Still not confident that cheating wasn't occurring, the testing was taken up a notch. They started to place large divider between the experimenter and the subject.

The testing was by no means done evolving. Because the experimenter would generally tell the subject if the guess was correct or not, another form of cheating began occurring. The subject would count the cards. For instance, if we know that there is five of each symbol and as each one comes up we would know there would be one less of the symbols, and so on. Of course, there was also the problem of poor shuffling. Dr. Rhine used to shuffle them by hand but later used a machine to do the shuffling.

Dr. Rhine continued to improve his testing procedures. No longer did he allow the subject to hold the cards before the test. Also, instead of using a large divider to separate the subject from the experimenter, he had them placed in separate rooms or even separate buildings to completely avoid any possibility of cheating.

Even though Dr. Rhine's testing procedures improved, he was unable to prove to the scientific community that his research supported the existence of ESP. Although, test subjects scored high in initial tests, scores were significantly lowered once all of the safeguards were in place to prevent cheating. In fact, most of his findings calculated more toward the chance of guess compared to psychic phenomenon.