How The Middle East Came To Control The World Through Religion

The Hub of the World

The Middle East as Origin Point

The Facebook page, Expreacher, once made the following argument:

At the time when Jesus was alive (the first century) a tiny percent of the world’s population was present in Judea. If God had sent Jesus to save the world, it was the worst possible strategy to send him to “a tiny Roman outpost where less than 2% of the world population actually lived.”

One may, as some have, apply this reasoning to all of what are known as the "Abrahamic Religions." That is, all religions that trace their root back to the person of Abraham. This includes Judaism, Christianity and Islam.

Anyone who has ever played the game of Risk is familiar with what a headache it is to hold on to the region of the Middle East. This more or less accurately reflects history. The Middle East has been a turbulent region long before oil was discovered or even relevant.

The reason that the Middle East, including Judea, has always been so turbulent is that it is the single point in Eurasia that connects Africa, Europe, and Asia by land. At a time when war and trade was largely done by land, whoever controlled the Middle East controlled all of the trade routes to the known world. In addition to that, it had a direct trading port to the Mediterranean Sea. It is not surprising, then, that all of the large empires of history, including Rome, put a great deal of military and political force behind maintaining control of this region.

Around the time that the Christian sect arose in Judea, Rome had firmly established their famous highway system through that region, making travel to all parts of the vast Roman Empire relatively easy and convenient. Better still, the Alexandrian Empire that had preceded the Roman rule had spread a pidgin language, called Koine Greek, that allowed practically every culture in the known world to communicate with one another with relative ease.

It was this language, in fact, that all of the books of the currently accepted New Testament were originally written. Within only a few centuries Latin replaced Koine Greek as the primary language of the Empire. While it may seem inconvenient that the Greek Language in which the scriptures were written died relatively close to the original writings, this turns out to be an advantage. The reason for this is that languages tend to lose or change meaning over time in what is called “Lingual Drift.” Since the New Testament texts require translation every time they need to be put in a new language, this ensures that the original meaning of the words and phrases used will remain distinct - as translation strives to mirror the meaning of the original text.

China and India had the majority of the world’s population around the first century. By the logic of the original argument, it would have made more sense for Jesus and Mohammad to visit the world in one of these countries where they could reach more people.

At the time of the first century, India's majority religion was Hinduism, arguably the oldest religion in the world. China was equally dominated by Buddhism around this era. Interestingly, the majority religions of these two countries, which still exist today, have made very little inroads to the western world. By contrast, the three major world religions, Judaism, Christianity and Islam, both originated in the Middle Eastern region, and spread extremely rapidly to a majority of the world.

While Christ lived out his life in a relatively obscure region of the world, one cannot argue with the rapidity with which his following spread throughout the world or the longevity of the belief itself. Whether or not Jesus was God, whether or not Christianity is true, one would be hard-pressed to support the argument that the place and time in which he came were ineffective. Similarly, regardless of the truth or falsity of Islam, its area of origin was undeniably advantageous to its spreading. Simply look at the results. 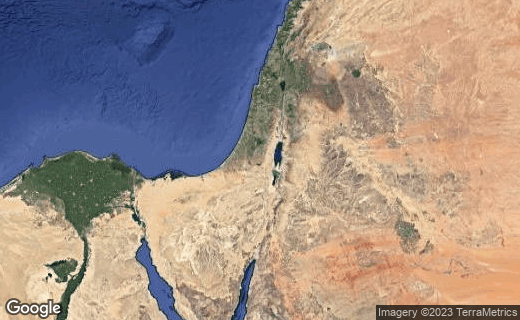 Now to focus this on what is currently the majority world religion: Christianity. In order to do this, it's worth looking at what the Gospels, themselves say about Jesus. If anything, the Gospels support this idea of Jesus being obscure and un-evangelical in his approach. Unlike Muhammad, who aggressively pursued the advancement of Islam during his life, Jesus was different.

The argument trades on the fact that Jesus was born and lived in relative obscurity in a portion of the world where less than 2% of the overall world population lived. In fact, according the Gospels, Jesus came from a sparsely populated district even by the already low standards of the country in which he lived. This can be readily seen in the response of Nathanael when Philip told him they had found the Messiah:

“Now Philip was from Bethsaida, the city of Andrew and Peter. Philip found Nathanael and said to him, ‘We have found him of whom Moses in the Law and also the prophets wrote, Jesus of Nazareth, the son of Joseph.’ Nathanael said to him, ‘Can anything good come out of Nazareth?’ Philip said to him, ‘Come and see.’”

Now an ambitious man, such as Muhammad, could overcome obscurity, advancing his renown through energetic campaigning. But Jesus does the opposite. He repeatedly attempts to stifle his own fame by asking or commanding people to keep quiet about miraculous deeds he had done. In fact, when Peter confessed that he knew Jesus was the Messiah, Jesus warned him not to tell anyone.

On multiple occasions throughout the Gospels, people enthralled with Jesus’ deeds and teachings tried to push Jesus into a position to assume kingship and take up his role as Messiah, to which he responded by slipping away or refusing the offer.

Jesus spurned several opportunities to spread his renown outside of the Jewish community by neglecting to directly engage Gentiles interested in his miraculous deeds.

Jesus seemed to go out of his way to offend the rich, powerful, and influential in his society whilst appealing to the poor, needy, and disenfranchised who were likely to have the least amount of social influence.

Jesus preached the majority of his recorded sermons in remote locations to which only his most dedicated of devotees would follow him. Roughly halfway through his ministry, Jesus began to obscure his teachings in confusing similes, later explaining these “parables” in private to his small band of disciples. He also began to frame his teaching in ways that were intentionally offensive to his audience, driving many of his followers away.

Throughout his ministry, especially toward the end, Jesus vocally and frequently announced to his disciples that he was going to be executed, a message they either seemed to ignore or reject.

Jesus’ entire period of recorded activities seems to have been calculated not to win friends and influence people, but rather to narrow his following down to a very exclusive group of faithful devotees. The fact that his ministry ended with Jewish Leaders and commoners alike screaming for his blood seems like evidence of this.

These facts make it all-the-more unusual that within decades of his death, the Christian faith had spread so rapidly and gained followers so devoted as to willingly be tortured and killed rather than to renounce their faith. It is difficult if not impossible to find a parallel anywhere else in history. There are certainly plenty of recorded cult leaders who gained an intimate and loyal following, had a brief period of ministry, and then died as the result of their teachings; but in every one of these cases, their teaching and their following died with them.

In every other recorded case, charismatic men who started an enduring religious system always taught for decades and amassed a large following during their lifetimes. One might think of examples such as Gautama Buddha, Abū al-Qāsim Muḥammad ibn ʿAbd Allāh ibn ʿAbd al-Muṭṭalib ibn Hāshim, and Joseph Smith.

Now one might argue, as many modern scholars do, that the figure of Jesus of Nazareth is largely mythological, so that the recorded acts within scripture do not accurately reflect a historic personage. If this is so, one might wonder why it is that the mythology chose to cast him as an obscure carpenter from an obscure town whose closest followers were a small group of frequently confused and bumbling fishermen, a tax collector (particularly despised at that time period), and a Jewish zealot. Why it would portray him as a man who eschewed fame and chose to associate with harlots and tax collectors while distancing himself from men of power and religious authority. Why it chose to show his final hours of riding into town on a donkey rather than a stallion, of being seized and abused by the Jews and Romans alike, and then dying in a barbaric pagan execution surrounded by thieves and criminals.

While there are plenty of tragic mythologies, it is difficult to find any parallel that writes of a noble figure so ignored and despised during his lifetime.

Jesus’ life is, however, consistent with Biblical narrative. Without exception, every great figure in the Old Testament came from relative obscurity, suffered rejection, and rose from this ignominy to greatness either during their lifetimes or as a result of their writings. This includes such characters as Abraham, Joseph, Moses, King David, Daniel and all of the prophets.

The logic of scripture is best summarized by the Apostle Paul as he writes in 2 Corinthians:

“But he (God) said to me, ‘My grace is sufficient for you, for my power is made perfect in weakness.’ Therefore I will boast all the more gladly of my weaknesses, so that the power of Christ may rest upon me.”

The principle of God’s strength being revealed through human weakness is a persistent theme throughout scripture. One might recall as an example the episode of David and Goliath. And the logic is simple and profound: God wants to make it clear that it is his power, and not human ability, that brings about the results.

The fact that Christianity rose from such obscurity to the prominence it now displays throughout the world is nothing short of miraculous. Jesus said it himself:

“He put another parable before them, saying, ‘The kingdom of heaven is like a grain of mustard seed that a man took and sowed in his field. It is the smallest of all seeds, but when it has grown it is larger than all the garden plants and becomes a tree, so that the birds of the air come and make nests in its branches.’

“He told them another parable. ‘The kingdom of heaven is like leaven that a woman took and hid in three measures of flour, till it was all leavened.’”

The challenge becomes: how does one show how else Christianity rose from such humble beginnings to become the primary religion on the globe?