How to Capture Paranormal Phenomena on Camera

For many paranormal investigators, the holy grail is to capture an example of paranormal phenomena on camera. Why? To prove the existence of the thing they are chasing, naturally! Sadly, it's not easy to snap a spirit or photograph a UFO.

Orbs are usually small grey or white circles that appear on a photograph. Their appearance has increased in frequency since the advent of the digital camera. Usually orbs are caused by a rational explanation - an out of focus speck of dust or a droplet of water, caught in a camera's flash. However, this explanation doesn't account for all orbs.

Orbs Captured on a Photograph

A great many people have taken photographs over the years that apparently show paranormal phenomena. After analysis most are found to have a rationale explanation. Generally, these photographs are caused by:

Photographs can sometime have anomalies - something is in the photograph that apparently shouldn't be. Some of these anomalous photographs may be considered paranormal photographs. 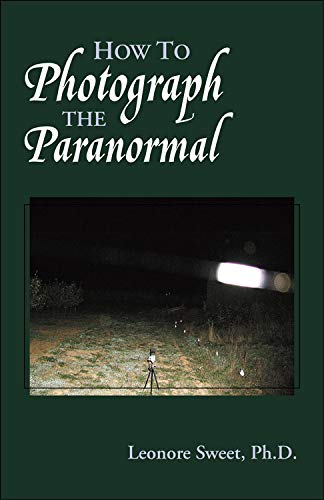 How to Photograph the Paranormal
Buy Now

There is a lot of debate about whether digital or traditional film cameras are better for the paranormal investigator. Both have advantages and disadvantages, which are summarised below. In the end, it is your choice, but for the beginner, a digital camera is probably the most practical solution.

Many photographs of allegedly paranormal events or phenomena have simple explanations. Some of the most common are caused unintentionally by the photographer. Here are some tips for your paranormal investigation to help you avoid those mistakes.