Is Genesis Just the Beginning for the Vatican and the Pope?

Now that a new Pope has been named by the Conclave, how will this affect us all. The first time a Pope from the Americas and the first time a Jesuit. How will his views differ from the European ones? He is not against condoms in certain circumstances, will this now be common place among Catholics? He suggests that gays adopting is a discrimination and has chastising priests for not baptizing children of single mothers.

Is this new Pope going to lead the way to new revelations of the thinking of the Catholic Church and the Vatican? 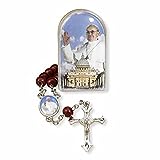 Should We Believe the Bible?

How much of the Bible are we to take literally? Even the Vatican has said that parts of the Book of Genesis are an “allegory” for the way God created the world.

What does this mean?

Allegory is a derivative of a Greek word meaning “to speak as to imply something other”. In other words, parts of the Book of Genesis should not be taken literally.

This week the Pope said that the Big Bang, proposed by scientists as what created the Universe, was a deliberate act by God and not an accident.

Ever since the Catholic Church rejected Galileo’s theory that the earth revolves around the Sun, they have been trying to reconcile themselves with the scientific world.

So now that the Church considers, at least one part of the Bible to be just a metaphor of the truth, how long will it be before the rest is viewed in the same light?

Perhaps, when in the future scientists claim they have found something that goes against the teachings of the Bible, we should use our own judgment as to whether to believe them or not, instead of waiting for the Vatican to catch up.