Is She Worse Than Rahab?

Recently, I was drawn into a discussion by a friend and my opinion was sought. It was about a pastor, his son and a lady in the Church choir. The pastor is the founder of the Church, a man filled with zeal and love for Christ and for the spread of the Christian message through evangelism and conversion. In one of his many evangelism trips with his ministers, he came across this lady who was a prostitute and with the help of the Holy Spirit converted this lady and she became a member of his church. She became interested in the activities of the Church and became a chorister, rendering praises with her sonorous voice. This caught the attention of the pastor’s son who then decided to marry her.

Problems starting brewing when the pastor’s son decided to tell the parents about his wish to marry her; his request was rejected and it led to a family quarrel that soon escalated into a Church affair. The lady was accused of seducing the pastor’s son, using her feminine charm and her expertise as a prostitute to draw him close to her and thus luring him to marry her. The main thrust of the issue was that since the son was also a pastor of the church and the future head, getting married to the lady, will make her a pastor’s wife and this position seems too high for one who was recently converted and who led such a promiscuous life virtually known by all. My simple contribution was a question, “Is she worse than Rahab?”

Looking at the personality of Rahab particularly when perceived from the view of her people; she was far from being patriotic in the real sense of the word. Does she not appear as a traitor who could be charged of treason against her own people? She betrayed her people by disclosing to the prospective invaders of her city the state of mind and the anxiety of the inhabitants. Furthermore, her action seems to portray some selfishness detrimental to her own people. She cared only for herself and her immediate family. She was solicitous only about saving her life and her family. Rahab went to the extent of abandoning her own belief and professing the foreign religion of the looming invaders. This was the woman who boldly lied to the king of her people and daringly made fool of his envoys. She preferred to save strangers rather than to identify with her people. She was just a low life and a prostitute.

Rahab was a woman of questionable and unusual character. In fact, the Hebrew version of Joshua chapter 2 describes her as “issah zonah” that is a professional secular prostitute distinct from “qedesah” which is a sacred prostitute; the latter would have been more respectful. However, hers was commercial, this means that she earned her living through this unpopular way of life. When the men on the orders of the king came to her to release the spies to them she didn’t deny seeing them, but maintained that they had left. Notice that the men didn’t ask what business she had with them; this stresses the fact that her trade was well known. She acknowledged that the men entered her house, perhaps like other men whom she used to serve. Her story was accepted because a prostitute does not bother herself with details, except the one satisfaction of her customers.

For some rabbis she was one of the four most beautiful women in the world (with Sarah, Abigail and Esther); for others, one of the four most seductive (with Ruth, Jael, and Saul’s daughter Michal). Her profession of faith was linked with those of Moses, Jethro, and Naaman; Joshua married her; and eight prophets were descended from her (including Jeremiah and Ezekiel in different lists). In short, as ideal proselyte, she was an example to all the nations of the world: any waverer could be challenged, “Are you worse than Rahab?”

The story of Rahab who rose from her marginal status to a heroine of faith in God, epitomizes the nature of faith as a gratuitous and unconditional gift from God. God initiates faith in us and sustains it. Our response is the faith which we make active through works. None of us can merit this gift. Rahab did not merit it. From her speech, all in the city heard about God’s marvelous deeds and they understood it differently. While others were moved to self-defense, these divine deeds engendered faith in a trivial woman from whom no one least expected it. She received it and was fast in activating it selflessly.

Rahab’s confession of faith in Josh 2:9-11 depicts a characteristic protestation of faith found in the Old Testament which often recalls God’s great acts of love; this formed the core of its confession of faith and broadened its gaze in faith. She confessed her faith like any other Israelite by recalling the great deeds of the Lord and their effect in the present. By so doing she identified with them and became one with them in their faith. She became a member of the Yahweh community for in the Old Testament, the faith of Israel was seen primarily as a relationship between the faithful community and Yahweh. It was not a ‘conversion’ experience that brought individuals to faith. It was their inclusion in the community of Yahweh, the people of the Lord.

The life of the converted lady too can be said to follow the example of Rahab. She responded favourably to the call for conversion from the pastor and faith was initiated in her. She took her faith up actively by joining the choir where she rendered melodious songs to God with the gift of the beautiful voice God gave her. Her acceptance of the faith included her in the Church, the family of God’s people. St Paul tells us that anyone who is born in Christ is a new creation, old things have passed away and everything has become new (2Cor 5:17). What is the essence of conversion when the past will always be visited? She was formerly in a family, the family of co-prostitutes where she was loved and accepted for who she was. So, why ask her to join the family of God’s people if she won’t be accepted and loved?

Christian fathers made some valid points and noted that Rahab was saved by her faith and her hospitality; so too, this lady has gained salvation; and her hospitality is seen in her positive acceptance and response to the word of God and the people of God, rendering her services no longer to men but to God. The gospels had many instances of prostitutes and conversion; and their example is endorsed by Jesus’ statement to religious leaders of his time that publicans and prostitutes precede them into the kingdom of God.

Rahab‘s life teaches us that God meets each person in his or her state in life. He invites us in what we are and from where we are. He expects us to begin our response to his invitation from our varied states in life. Our salvation depends so much on how we utilize our “present” in answering God’s call. He met Rahab as a prostitute and she used her position to further God’s plan for human salvation. She was not afraid to rise from her social status, from where she was and from what she was. This lady too should be allowed to rise above the social stigma associated with her before her conversion. 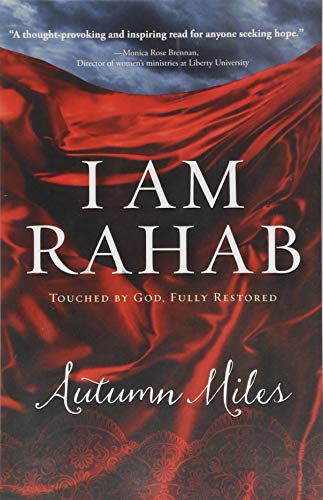 I Am Rahab: Touched By God, Fully Restored
Buy Now